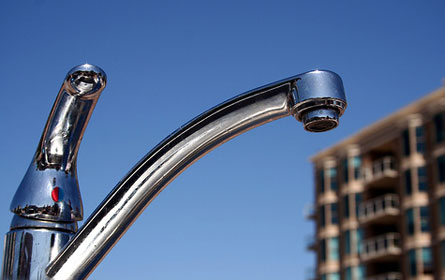 On the edge of Newtown Creek, which separates Brooklyn and Queens, eight giant egg shaped structures emit a blue glow into the night. But the complex is more than an architectural experiment. It is a wastewater treatment plant that extracts water from the sludge treated there and, as a result, helps improve the quality of surrounding waterways.

The plant's upgrade, already the largest wastewater treatment plant in the state, is one of the city's biggest long-term infrastructure projects ever. Although the federal and state governments ordered the upgrade, its expected final price tag of $4.8 billion will be almost entirely funded by the city.

Costs for that system are rising as revenue declines, so the price of water is likely about to go up once again. The Water Board will vote on a 14 percent rate hike on Friday. If approved -- as is all but certain -- the new rate will go into effect July 1. Together with past increases, the latest hike means the cost of water in the city will be 60 percent higher than it was four years ago. More increases are also expected.

But elected officials and activists argue that the water rate hike isn't fair and that the Water Board, which sets those rates, is in need of reform. They say the board could spend its money more efficiently. Furthermore, its efforts at recouping bills from those who have not paid have been condemned as anti-consumer by some. The board itself is also lambasted as insular and too close to the mayor.

"These water rate hikes have amounted to nothing more than a backdoor property tax increase," said Councilmember and comptroller candidate David Weprin.

The state government created the Water Board as a publicly owned, financially independent utility in 1984 when the city was still recovering from the 1970s fiscal crisis. "During the fiscal crisis, the State Legislature didn't want a utility as important as water to be subject to political pressures," explains Don Capoccia, a board member.

The board sets rates to support the system. It also creates rules and regulations regarding rate payments and access to water meters on private property. The board's seven members are appointed by the mayor for two-year terms. Rather than being financed by bonds backed by general tax revenues, the water system is funded mostly through the charges it sets on water usage.

While the board is supposed to be independent, critics charge it is accountable only to the mayor. "It's a sham. There's no independence," said Councilmember James Gennaro, chairman of the council's Environmental Protection Committee. "They get all the information they use to make their decisions from the mayor's office."

Last year, Jim Tripp, the board's chair at the time, was reportedly forced out because Mayor Michael Bloomberg viewed him as too independent.

A 14 percent increase in the water rate would translate roughly into an extra $100 per household annually. The board expects to raise an extra $330 million from the higher rates and new proposals to limit late payments.

The board argues that the rate increase is needed due to increasing costs and declining revenues. After a spate of construction, expansion and renovation -- most of it mandated -- the Water Board is now paying off bonds issued to pay for it all. The costs associated with the mandated projects are the largest driver of water system costs for this year and the next. Operating expenses -- such as electricity and chemicals to treat sewage, as well as pensions -- have also grown considerably. (See Gotham Gazette's features on the water and sewer systems.)

Added to all this, water consumption has dropped an "unprecedented" 6 percent, which the board blames on the economy, so less money is coming in. To make up for that, the board is raising rates and so, some say, penalizing people for conserving.

"Revenue has fallen in this recession because people are using less water and because residents are struggling to pay their bills as it is," said Councilmember Vincent Gentile. "I would suggest that raising rates in reaction to residents' proven financial hardship is not just nonsensical and insensitive. It's cruel."

Elected officials, activists and candidates contend the board could find other ways to solve its financial problems.

The biggest issue, some argue, is the rent paid to the city by the board for the use of its water infrastructure. Once debt service becomes large enough -- as it did starting in 2005 -- the Water Board pays the city rent equal to 15 percent of the money spent repaying debts.

This year, the rental payment â€“ as it is called - was $160 million. Next year it is estimated to be $198 million. The idea is that the payment helps shore up the rating of the bonds used to finance the system's capital projects. The rent money goes into the city's general funds. Last year, $55 million of it went to reimbursing various city agencies, such as $30 million for the Sanitation Department to keep debris out of the sewers and $5.7 million to the Fire Department for hydrant inspections.

William Thompson, the comptroller and a mayoral candidate, has called for an end to the rental payment. Instead, he suggests investing half of that money back into the system, which he points out would save money in the long term. Thompson would use the other half to reduce rate increases.

The city says that the arrangement is common nationwide, like in Philadelphia and San Francisco, among others. "One of the things that the Water Board's ongoing rate study has determined is that most large water utilities make a similar payment to their municipalities," said Mercedes Padilla, a Department of Environmental Protection spokesperson. "In fact, many large utilities pay substantially more to their municipality than DEP does, and in most cases, they do not get as many services in return as we do."

But in Los Angeles, where the water utility there pays into the city's general fund, a state court issued a tentative ruling last month that called the practice unconstitutional.

New York City's Department of Environmental Protection will examine such arrangements, as well as alternative rate structures, in a study to be released at the board's June public meeting. The report itself has become a subject of criticism, with some officials saying it has taken too long to draft.

The rental agreement is not the only part of the board's operation that has sparked concern. The environment department, which operates and maintains the water system, has about $40 million in a holding fund to cover any unexpected water needs. The Independent Budget Office last year recommended cutting that fund in half.

At a recent hearing, City Councilmember James Vacca asked Steve Lawitts, the acting environment commissioner, what it was used for, he didn't get much input. "He had no answer," Vacca told the Observer. "I didn't think that holding codes were allowed in agencies"

In 2007, a private consulting firm recommended the city place liens on property owners who don't pay their water bills. The move could collect over $400 million that had been overdue for more than a year.

The city began the process in December of that year. Property owners not paying their bills are now forced to settle up because the board places a lien on the taxes they owe, which, if unpaid, could eventually lead to foreclosure.

Although these efforts have brought in most of the missing funds and helped avert a mid-year hike, the prospect of putting thousands of properties -- many of them residences -- at risk of foreclosure during a housing crisis has become an issue.

To further pursue cheats, the Water Board has proposed two regulations to accompany the rate hike. It would impose large fines on customers suspected of stealing or barring access to water meters. But these have not been received kindly in some corners.

Hershel Weiss, president of the New York chapter of the American Society of Plumbing Engineers, called the proposals "two of the most anti-consumer documents ever written by the DEP." He says they will punish people with fees that could climb into the millions because the board suspects they are stealing. "There is no requirement for the DEP to prove that any theft is taking place."