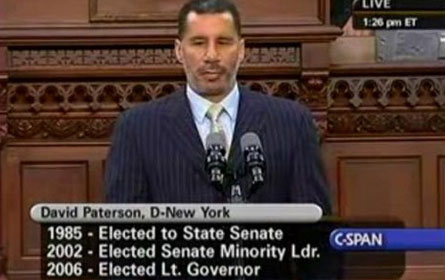 Photo from Governor Paterson 2010
Paterson giving the State of the State speech in April.

On March 17, 2008 when New Yorkers and the news media were focused on the resignation of Gov. Eliot Spitzer, few, and probably only hard-core political wonks, considered the effect Spitzer's resignation would have on the office of lieutenant governor since the then lieutenant governor, David Paterson, was about to become governor.

The Conundrum of the Lieutenant Governor Vacancy

Unfortunately for Smith, however, while the New York State constitution empowers the lieutenant governor to act as the president of the Senate and also cast votes in that body, he will not be getting that extra Senate vote any time soon. That is because, the law does not specifically allow for the office to be permanently filled. Even worse, the law is about as confusing as can be with respect to how long the temporary president of the Senate fills this new dual role and how having two posts affects the temporary president's role as leader of the Senate chamber.

This begs the question then: Why doesn't New York have a clearer and more concrete process for filling a vacancy in the office of lieutenant governor? Political realities of Albany politics aside, this convoluted process must be due at least in part to the state's complex and lengthy constitutional amendment process.

In practice, this timeline means that even if legislators could decide on which process for filling the lieutenant governor vacancy they wanted to adopt for New York at this time, they would have to vote on the bill before the end of June 2010 and then again in 2010 or 2011 after the general election before putting it to the voters.

What Other States Do

If the Legislature takes the timing constraints seriously and gets down to the details, there are a few procedural options for how to fill this vacancy. According to a new report Filling Vacancies in the Office of Lieutenant Governor, published by Citizens Union, the nonprofit advocacy arm of Citizens Union Foundation, Gotham Gazette's publisher, 30 states specifically delineate a process for filling lieutenant governor vacancies.

Among those that have a process, the most common procedure - used by 14 states - is for the governor to appoint someone to the post who may or not be subject to some form of legislative confirmation. Ten of these 14 states, including California, Florida and Maryland, allow the governor to fill the appointment with a confirmation by a majority of both houses of the legislature. But some states like New Mexico, which amended its law in 2008, require that only the Senate confirm the governor's appointment.

Another seven states, such as Connecticut, Hawaii, Pennsylvania and South Carolina, either allow the temporary president of the Senate to automatically fill the vacancy, or make the temporary president serve in specifically limited capacities - like New York's process. At the other end of this spectrum, New York could adopt Alabama and New Jersey's practice of holding a special election to select the next lieutenant governor. The final option, which is used by two states - Rhode Island and Texas -- may be more in line with New York's tradition of appointing commissions or task forces to study issues. These states create a special senate committee that elects a replacement.

Currently pending in the New York's Legislature are at least six bills that adopt various forms of the processes for filling lieutenant governor vacancies used nationwide. The diversity of the proposals presents the Legislature with a variety of options, but in order to institute any change the governor and Legislature are going to have to act soon.

What Should New York Do and How to Get There

As any casual follower of Albany politics knows, change is slow, or at worst unlikely. So does that mean that New Yorkers are likely to be without full representation in the state capital in the form of a lieutenant governor? Unfortunately, the answer is yes. This is not only due to the potential for Albany inaction on this issue, but also because the timetable for passing a constitutional amendment means the legislature does not have enough time to act before New Yorkers elect a governor and lieutenant governor in 2010.

Even though it may be too late to change the current process for filling lieutenant governor vacancies before 2010, it does not mean the elected officials in Albany get a pass this time or that the fire is out and therefore Albany should do nothing. New Yorkers deserve full representation in Albany at all times, especially since the lieutenant governor is one of only four statewide elective offices, so elected officials have a responsibility to change the law to avoid this problem in the future - when, given New York's history, this ultimately will happen again.