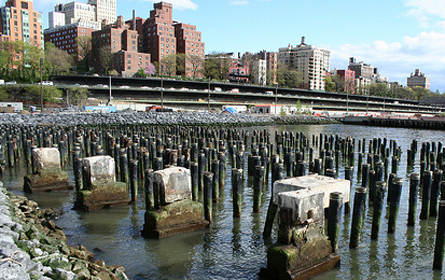 Photo mysticshildz
The new Brooklyn Bridge Park is one of many signs of renewal along New York's waterfront.

For too many in the New York metropolitan area, our harbor has been a virtual desert, devoid of life and activity for more than a century. New Yorkers around our magnificent estuary have been unable to connect to the water that surrounds them, first cut off by industry, highways and rail and more recently by the lack of a comprehensive vision, adequate funding and coordinated regulatory system for our shore.

This all is starting to change. The literal green shoots of Brooklyn Bridge Park and Governors Island. are the most conspicuous evidence of waterfront renewal. Hundreds of other initiatives throughout the metropolitan area are also underway, less visible but no less important. The entrepreneurial spirit and creativity that are hallmarks for our city are evident at the water's edge from the Rockaways to the South Bronx. Together we are bringing our harbor and waterways back to life.

[For a report on an effort to preserve and improve one part of New York's waterfront -- Jamaica Bay -- go here.]

Citizens have united to clean the water; protect the vital but often overlooked maritime industry; make sailing, paddling and rowing more accessible to the public; support ferry service; and create waterfront parks large and small. Together, all these activists and organizations have formed a unique "Blue Movement" demanding change in how we use and manage this shared and precious resource.

Mayor Michael Bloomberg has caught and contributed to this civic wave, most recently with his announcement of WAVES (Waterfront Vision and Enhancement Strategy). The heart of WAVES is a new waterfront plan; but more important, like its sister initiative, PlaNYC2030, it is a full court press using all sectors of city government to coordinate and advance efforts to enhance our harbor. This administration realizes the push is just as important as the plan.

WAVES will certainly benefit from government leadership, but what it needs to succeed is citizen input. Through the spring and summer, the Department of City Planning will be gathering comments and ideas for the waterfronts throughout the five boroughs. New Yorkers should get involved and be specific: What combined sewer outfalls need to be abated; where would be a great places for docks; where can children in your neighborhood get to the water for environmental education; where should a kayak launch be located; what businesses should use the waterways to move goods and get trucks off our roads. To learn how to submit comments for WAVES and to get involved in the outreach sessions, go to http://www.waterfrontalliance.org/projects/cwp. By law, the city's Comprehensive Waterfront Plan produced through WAVES must be completed by Dec. 31, 2010.

The city's effort is a great step forward, but for our harbor more is needed. Too often protracted battles over what can or cannot be built on or near the water have slowed or stopped parks and other waterfront development. The overwhelming bureaucratic morass at the water's edge has prompted many developers, park advocates and maritime businesses to alter or abandon innovative plans.

WAVES provides an opportunity to align our city and state agencies with progressive waterfront policy and waterfront regulation and use all of government's tools -- zoning, incentives, and regulatory reforms -- to coordinate protection and enhancement of environmentally sensitive areas, growth of the water-dependent maritime industry, and creation of great waterfront parks, new docks and more water access. 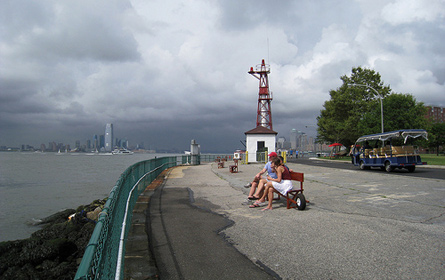 PhotoKim Rossi
Governors Island presents another opportunity for New Yorkers to reconnect with their harbor.

At the same time, the City of New York must reach out to its sister municipalities on the New Jersey side of the Hudson and to the Port Authority of New York and New Jersey as we put together and implement this new comprehensive plan. Fish don't care about boundary lines drawn down the middle of the harbor and neither should we.

Even with a great waterfront plan and new alignment between the state and city we can’t have a great waterfront without money. This brings us to the greatest challenge facing Bloomberg and all involved with WAVES: ensuring our region receives a fair share of federal funds to support our harbor. Our harbor, known as the Hudson Raritan Estuary in environmental circles, has received the short end of the stick. As noted in a recent letter from Bloomberg and Gov. David Paterson to President Barack Obama, our harbor was allocated $800,000 of federal restoration funds last year, an insignificant appropriation compared to the 2010 allocation of $475 million to the Great Lakes Region. Gateway National Recreation Area, the fourth most visited in the country, is similarly short-changed. Our commercial port suffers from insufficient federal rail infrastructure, forcing 98 percent of the goods delivered in the harbor onto trucks that choke our streets and highways.

What is the cure for this federal disinvestment? The area's Congress members must establish a New York and New Jersey Harbor Caucus to champion our region’s harbor and waterfront needs in the halls of the Capitol.

The very names of our neighborhoods ring with maritime history and the echoes of a lost connection to the water; from Baychester to Bay Ridge, from Port Morris to Port Richmond, these communities and dozens of others beg for a reconnection to the water. Imagine docks in every neighborhood for recreation and education, where kayak, historic vessels and tall ships can more. Envision ferries that can ease commuting, and harbor cruises and sailing ships picking up and dropping off passengers. And imagine the vital Port of New York once again the center of commercial shipping with a growing number of green and blue-collar jobs in its bustling port and maritime industry.

Accomplishing all this will take vision, energy, leadership and money. It will also take the collective effort of everyone who cares about our waterfront's future to be active voices in WAVES and to hold our elected officials accountable for a fair share for our harbor. The result will be a renewed and revitalized Gateway to America, What a legacy that would be for future generations, here, across the country and around the world.

Roland Lewis is president and CEO of the Metropolitan Waterfront Alliance