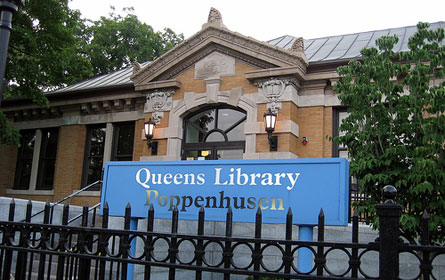 Photo by wally g
The Poppenhusen branch library in College Point is part of the Queens Public Library, the largest library system in the country in terms of circulation.

Spending an afternoon at the Leonard Branch Library in Brooklyn, the looming threat of steep budget cuts this year appears refreshingly non-existent. For now at least, business is as usual -- people typing away at the public computers, teens chatting over Magic cards and readers lurking in the CD and fiction sections.

The library's information supervisor appears pleasantly surprised to find that all the flyers for the branch's new adult yoga program had already been taken. Though cheery and upbeat, Shelly (who prefers to omit her last name), was one of two employees at the branch to receive a notice of their potential layoff come July. "It's been devastating," she said. "I love my job."

Coined the "biggest loser" in the mayor’s executive budget, the city's three library systems are facing a proposed total of almost $75 million in cuts for fiscal year 2011 -- the most severe library cuts in the city's history. Should the mayor's budget pass, community branches in each system would be forced to curtail their opening hours by as much as half or, worse, close permanently. As many as 1,500 library employees could lose their jobs as a result, and about 650 employees in the Queens and Brooklyn libraries have already received 90-day layoff notices.

In 2008, the City Council managed to increase baseline funding to libraries, allowing branches in all five boroughs to stay open six days a week. In 2009, city library subsidies reached an all-time high, with a total allotment of almost $327 million. Falling to less than $310 million in 2010, the projected budget for subsidies in 2011 hangs at $254 million -- an almost 22 percent reduction over the past two years alone.

In the early years of the Bloomberg administration, libraries were a frequent target of mayoral cuts. These came to be seen as half-empty threats however, since City Council would manage to restore funding -- either fully or in part -- relieving libraries of any dramatic losses. The back-and-forth between mayoral cuts and libraries became a kind of annual tradition, informally referred to as thebudget dance.

Today, the budget dance is far less predictable. This year, given the severity of the city's fiscal situation, no one is promising that the cuts will be restored.

"Budgeting is determined by bottom lines and figures, and the hoped-for consequence of funding cuts is a reduction in any budget gap,” said Councilmember Vincent Gentile, chair of the committee that oversees libraries. "I believe it's important to put a face to the consequences of reduced funding to libraries: When we take away a resource that has the ability to help everyone, regardless of their race, age, gender or income, we hurt everyone."

Where They Will Hit

All of New York City's three library systems will be affected by the cuts. Brooklyn and Queens have their own systems, while the New York Public Library has branches in Manhattan, Staten Island and the Bronx. Though each of the three is funded differently, all face potential branch closures, layoffs and reductions in hours. Until the passing of the final budget however, none of this is certain.

Queens Library: Measured on the basis of circulation volume, the Queens Library is the largest library system in the country. In 2009, it was named library of the year by Library Journal.

As proposed in the executive budget, Queens faces a $17 million loss. If the budget is passed, 14 branches will close permanently, as 34 others would be open only two or three days a week, a reduction in service by almost half. The budget also calls for a 38 percent reduction in the system's workforce, or a cumulative 44 percent over the past 18 months.

The library's communications director, Joanne King, called the cuts a "grave threat" to service in Queens.

Brooklyn Library: In the 2011 preliminary budget, Brooklyn Library faces a $20.6 million reduction. Under the "worst case scenario" 363 employees, or 30 percent of its total workforce, could face layoff.

Now boasting six-day service at all 60 locations, the library will be forced to temporarily close 16 branches in order to stay open a minimum of five days a week. Without shutting branches, the library could only open two or three days as a result of drastic reductions in staff. Executive Director Dionne Mack-Harvin said in her testimony Friday, "I want to be very clear that closing libraries is not a negotiating ploy or scare tactic. We know that shutting doors is a drastic step and not an action we take lightly."

All this comes at a time when city libraries are experiencing "peak usage," according to Mack-Harvin. At the preliminary budget hearing in March, LeClerc said, "While the impact of the recession continues to take its toll across our city, we have seen no slow-down in the record numbers of people using our services."

As free English for Speakers of Other Languages classes offered by libraries continue to turn hundreds of people away, more and more find themselves taking advantage of free Internet access to search and apply for jobs. In a recent study, one third of all Americans above the age of 14 have used the internet at their libraries last year -- 50,000 of them to "find work, apply for college, get public benefits and look up medical information."

At the budget hearing Friday, Mack-Harvin said, "It's inconceivable that when our libraries are busier than ever, when children, families, seniors and other Brooklynites need us the most, the FY 2011 executive budget proposed the deepest funding cuts faced by Brooklyn Public Library in its 113-year history."

Since 2008, or the establishment of universal six-day service, Brooklyn Public Library has grown substantially in circulation and popularity, as it currently holds the highest program attendance in the country, at more than 900,000 people.

While it remains to be seen exactly which employees will lose jobs, library officials confirmed that layoffs will be made on the basis of seniority, meaning newer employees face the highest risk. For now, though, notifications sent in May are warnings -- until further notice.

Library officials in all three systems claim to have no idea as to which branches could permanently close. Preferring to remain anonymous, a supervisor at Queens Public Library said, “We don’t know names, we just know numbers.” There is also little knowledge as to which programs would be reduced or cut permanently. So far, New York Public Library announced that if it had to absorb the proposed cuts, it would reduce the number of free English as a second language classes from 117 to 48.

According to Dena Libner, director of communications for Gentile, "The speaker's Budget Negotiating Team is involved in the discussion of restorations" -- though it is still unknown what those restorations might be.

At the budget hearing Friday, library officials estimated that shutting just one community branch would cost the city between $48,000 to $50,000 â€“ a "one-time cost of closure” excluding long term security and upkeep costs.

From re-enacting Ghostbusters at the reading room of the lavish Fifth Avenue library to protests organized by children in Queens, New Yorkers are showing libraries a little bit of love in a lot of different ways.

With 22 days to go before the budget deadline, some 96,200 letters have been sent so far to City Council members' district offices across the boroughs, nearing the libraries' proposed goal of 100,000. Sponsored by advocacy groups Urban Libraries Unite and the Save NYC Libraries Postcard Campaign, a 24-hour "We Will Not Be Shushed" read-in is scheduled for June 12 at the Central Library in Brooklyn. The event signifies a combined effort by all three systems to rally one large last-hurrah for libraries.

"Today, our goal is to make the potential widespread effects of library cuts clear, and to make clear how crucial libraries are to us," Gentile said at a recent rally at City Hall. "Because everyone can be hurt by these cuts, everyone needs to fight for the protection of libraries."