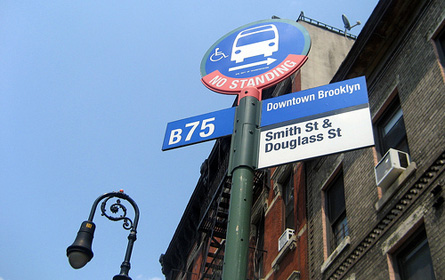 When the Metropolitan Transportation Authority cuts service, not even Brooklyn Heights and Carroll Gardens easily absorb the loss. Despite being Brooklyn's most affluent neighborhoods, these two communities cannot escape the trouble in Albany.

According to one candidate for State Assembly, corruption and mismanagement in the state capital is responsible for cuts that have reverberated in these sections of Brooklyn and throughout the city.

Engineer and former unsuccessful candidate for New York City Council Doug Biviano announced on May 12 that he would challenge Joan Millman, the assemblywoman from Brooklyn’s diverse 52nd District, in the September Democratic primary. A fourth-generation Brooklynite who studied at Cornell University, Biviano has attacked what he sees as Albany's corrupt tendencies and has accused Millman of not taking action to address the misdeeds of her colleagues in the capital.

Almost every problem, Biviano believes, has its roots in corruption and waste and the misdeed of Albany incumbents.

For her part, Millman points to a number of accomplishments including having successfully advocated to designate the Gowanus Canal as an Environmental Protection Agency superfund site, holding hearings on funding for the New York City Board of Elections to introduce new optical scan voting machines, and urging the inclusion of a new middle school in Two Trees Management's Dock Street project in Brooklyn.

Like so many New Yorkers, the people of the district have felt the sting of MTA service cuts, which will create hardships for many, particularly the area’s elderly and disabled residents. Both Biviano and Millman have stepped up efforts to try to restore the original bus lines.

Assembly District 52, which spans from Brooklyn Heights and Vinegar Hill in the north to Gowanus in the south, lost several bus routes on June 27, including the B37, B51, B71 and B75. By many accounts, travel has become chaotic and overcrowded because there is no parallel subway for many of those bus routes.

Millman, who spent over 30 years in education as an elementary school teacher and librarian and educational consultant to former City Council President Carol Bellamy before going to Albany in 1996, began fighting the MTA over possible service cuts when the agency proposed eliminating student metro cards. Now that the students cards have been preserved, Millman has been working to recover the lost bus lines.

On June 25, Millman sent representatives to a large rally at a B71 bus stop, where constituents criticized the transportation cuts. For those who cannot access the subway, such as senior citizens and those with disabilities, buses are the only option. Moreover, the buses, claims the assemblywoman, provide "a link between communities and access to school, work, medical facilities and cultural institutions."

Millman also has sponsored legislation in the Assembly that provides alternative funding for the MTA. One such bill would allow $30 million of federal stimulus money to be included in the MTA's operating budget. Millman has also sponsored a bill to create a residential parking permit system with the fees going to support mass transit. "It is difficult to get traction for a lot of these bills," Millman said, but she added they are at least not completely dead in the water.

But Biviano has less hope for the bills. "These are just short-term fixes," he argued. He blames the MTA budget gap on "entrenched interests" in the state government and, on his web site, says, "We need to elect assembly members who have the guts to stand up to entrenched interests in Albany and force change."

Biviano's plan to fix the MTA's finances would include a low-interest federal infrastructure loan to refinance the authority's debt. Repaying the loan at a rate as low as 0.5 percent interest over 24 years to the Federal Bank for Infrastructure Modernization, which has yet to be officially created, could save the MTA $726 million each year, Biviano calculates. Additional federal stimulus funds could further serve to balance the budget.

That $726 million would allow the MTA to fix its budget in the long-term and stave off fare hikes in the near future.

Beyond transportation, Biviano's key point in his bid to represent the 52nd Assembly District is that Millman has done too little as chair of the Assembly Committee on Election Law to reform New York’s system.

"The election law system keeps most of Albany reelected for life," Biviano charged. This, he believes, results in complacency by legislators, which is not in the best interests of the voters. "There's no push" by the elected officials, "Biviano said. "They do the bare minimum. There's no accountability whatsoever."

Currently, 98 percent of incumbents return to the capital if they seek another election, prompting Biviano to call Millman's work with election law as an "Incumbent Protection Program." Challengers should be encouraged, Biviano said, not undermined by the system.

Millman, though, defended the election process. The ballots, she said, "are not that difficult to get on. You need 500 signatures." Regarding the high reelection rates of incumbents, she said, "Look, the voters make that decision. I pass decent legislation, so I think they're satisfied. I’m running on my record."

After petitioning for enough signatures to enable him to get on the ballot, Biviano, like other challengers, will be up against the system of member items, also known as earmarks of pork. Under this current system, Biviano said, "Money comes with the incumbent’s name on it." Groups that receive the money may therefore be reluctant to throw their support behind someone else and risk that funding. Voters also may associate the funds with whoever the incumbent is.

Challenger Doug Biviano sees the misdeed of Albany's incumbents as causing any of his districts problems.

Assemblywoman Millman, though, does not think the member items play a significant role. "This year there may not even be member-items, given the trouble with the budget," she said In past years, according to Millman, the amount was "never very large" for her district -- in the neighborhood of about $175,000, which she disbursed to various nonprofit groups.

If elected, Biviano said he would introduce ethics reform legislation to foster competitive elections by creating term limits, requiring all candidates to disclose their income, and advocating for an independent redistricting commission.

Yet Millman, who also supports changing the redistricting system, charges that Biviano lacks a concrete plan to end the Albany corruption. At an Independent Neighborhood Democrats meeting, she said, Biviano was unable to articulate a plan of action.

"What I do in Albany, is that I associate myself with the good government groups and with the legislators that try to help the most people," Millman said.