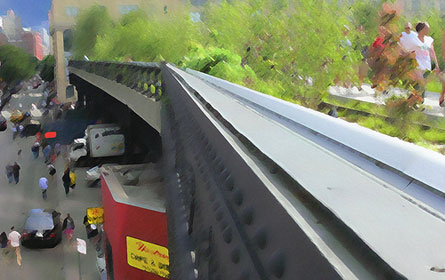 Photo by zinetv
Twenty years ago who would have imagined that an abandoned rail line in lower Manhattan would become one of the city's most prized parks?

In the 1970s, who could have predicted that in 2010, New Yorkers would take yoga classes on a lush lawn in Bryant Park, enjoy a lunch break in the middle of Broadway or bike to work along the Hudson River? With the restoration of so many parks and the creation of new ones like the High Line and Brooklyn Bridge Park, outdoor public spaces have become central to life in New York City in a way that hardly could have been imagined just a few decades ago.

A similar shift has happened around the country, from Atlanta to Chicago to Portland, Ore., paralleling the reversal of cities' fortunes over the past few decades. "Parks are back on the public agenda," writes park expert Peter Harnik in his new book, Urban Green: Innovative Parks for Resurgent Cities, which explores how to take advantage of this opportunity to weave more green into the urban grid.

Drawing on research into American city park systems by the Center for City Park Excellence at the Trust for Public Land, which he directs, Harnik shows how cities have created new parks despite formidable obstacles: lack of space; a shortage of money and conflicting priorities for spending it; disagreements over what to build and where it should go; and resistance to change by everyone from mothers wary of letting anyone other than students use school playgrounds to stormwater engineers unfamiliar with green infrastructure.

As the Bloomberg administration begins to gather public input for updating PlaNYC 2030, the city's sustainability plan, which calls for increasing open space, there are many lessons and ideas to be drawn from this optimistic book.

The Importance of Planning

According to Harnik, setting one abstract standard for how much parkland cities should have for a given population does not work for real cities. Every city needs to find its own balance between green space and the other elements that bring them to life, such as museums, theaters, restaurants, shopping and architecture. Even in crowded cities, he notes, some parks are underutilized. More important than simply opening up more space is creating the types of parks people want, in the places where they are most needed.

The key to success is a fair, inclusive and transparent master planning process based on an assessment and analysis of current conditions, needs, benefits and public interest and willingness to pay. "It doesn’t do any good to have an open process for soliciting input if the process for making decisions is then secretive, biased or preordained," he writes. The first half of Urban Green covers in detail how a successful planning process works.

To see park plans through to completion, a timeline and budget must be an essential part of the process, Harnik cautions. "The budget -- and even the potential opposition aroused by the budget -- is what often serves to motivate, unify and strengthen pro-park activists."

He cites Pittsburgh, where a $20 million plan to restore Schenley Park gathered dust because Mayor Sophie Masloff feared opposition from voters concerned about taxes and spending, especially in light of the city's financial problems. But when the next mayor, Tom Murphy, reopened the discussion, it sparked tremendous public activity that resulted not only in an improved park, but also the formation of private partnerships and advocacy groups to support the expansion of parks and trails in the city.

The worst economy since the Great Depression might not seem like a propitious time to build new parks. But Urban Green includes examples of successful projects costing tens of millions of dollars for which "there was no money" at the outset. Voter surveys show that people in both liberal and conservative areas are willing to pay higher taxes for parks and land conservation. In 2008, ballot measures for creating and restoring parks and preserving open space passed in Charlotte, Tampa, San Francisco, Seattle, Phoenix, Santa Fe and scores of other cities, towns and counties.

Harnik emphasizes the importance of politics in creating a great urban park system -- "politics based on the muscle of grassroots supporters, the brains of sophisticated leadership, and the nerves of elected politicians who know when to stand firm and when to compromise."

It is generally agreed that in Mayor Michael Bloomberg, who wrote the preface to this book, New York has a leader who understands the importance of parks and public space to the city's economic and environmental sustainability (and to the health and well-being of its citizens). He has made creating new open space and putting a park within 10 minutes of every resident a major goal of PlaNYC 2030.

However laudable, though, the plan emerged largely from the top down, without the goals and ideas for parks and public space emerging from neighborhoods and reflecting their residents' needs and desires. In creating the sustainability plan, the Bloomberg administration met with more than 150 organizations and solicited public input, but it did not undertake a true master planning process.

In an effort to help communities throughout the city fill this gap, the citywide parks advocacy group New Yorkers for Parks recently created its own Open Space Index, which sets flexible targets for different types of open space in neighborhoods based on extensive research and widely accepted best practices. The organization hopes that communities will use the index to determine and advocate for their own park and recreation goals, according to Cheryl Huber, deputy director of New Yorkers for Parks.

Using the index, New Yorkers for Parks conducted a pilot study on the Lower East Side to assess current open space and recreational options. The group then met with community stakeholders to present the results, get feedback, establish priorities and develop a strategy to gain the agreed upon improvements. With funds from Councilmember Julissa Ferreras, the organization will use the index to guide the creation of a parks agenda in Jackson Heights, Queens.

Ideas from All Over

Finding space for parks is one of the biggest challenges in built-out urban areas where the price of rare empty lots is high. The second half of Urban Green examines numerous possible solutions to this dilemma from cities around the country including New York. The ideas range from low-tech community gardens to complex engineering projects like decking over highways and reservoirs.

A great many of these ideas for squeezing in park access already are being put to the test in New York City as part of PlaNYC 2030 (and even before that), such as turning underused streets into public plazas, installing lighting to make playing fields usable at night, making the former Fresh Kills landfill into a park and opening schoolyards to the community.

Former industrial sites offer some of the best opportunities to create a significant amount of new parkland and revitalize city centers at the same time. "As seeds for regrowth, parks are key," Harnik writes. "But they must be reserved, designed and placed in advance of the built environment that will surround them," which, he notes, doesn't come naturally in this country -- or, one might add, in New York City. The city's development-driven culture has led to missed opportunities to create large areas of new parkland around which housing and commerce can grow.

One example is the Atlantic Yards project in Brooklyn, where an arena and 16 apartment towers are being built partly on a deck covering the Metropolitan Transportation Authority railyards. The green space between the apartment buildings is slated to be added last, leading many to fear it will never exist. And even if the project and its parks are completed as planned, a neighborhood with a severe shortage of parks and sports fields will end up with a slightly lower ratio of parkland to resident than it now has.

Harnik's book inspires a momentary fantasy of what downtown Brooklyn might have looked like with a new central green space -- one that could have been funded with part of the nearly $300 million subsidy the city and state provided for the arena. A park might even have generated a greater economic return than the arena.

On Earth Day this year, Bloomberg announced that his administration would begin updating PlaNYC and invited New Yorkers to send in their suggestions. Public meetings will be held in the fall, but are not yet scheduled, said Bloomberg spokesman Jason Post.

What's next for New York City? To preserve all of our remaining unprotected natural areas, such as Pouch Camp in the heart of the Staten Island Greenbelt? Create an aerial system of parks on the rooftops? Expand and make permanent a network of community gardens and farms and teach children to garden in schoolyards, to bring fresh and healthy food into low-income communities? Not very likely. But, then again, what were the odds of creating a stunning park on an old rail line that adjacent property owners wanted to tear down?

Reducing dependence on the automobile and reversing land-use patterns that consume forests and farms at an alarming rate will be essential in addressing global warming and meeting the other environmental challenges of the 21st century. Strengthening and creating compact urban cores is an important piece of the puzzle. Great park systems can help create the kind of cities people will want to live in. Urban Green shows that, when the political will is there, parks will follow. Who knows what seemingly impossible green spaces New Yorkers will be enjoying in 2030?

On Tuesday, July 27, the New York City Parks Department is presenting a talk by author Peter Harnik on Innovative Parks for Resurgent Cities. It will take place in the Arsenal in Central Park at 6 p.m.