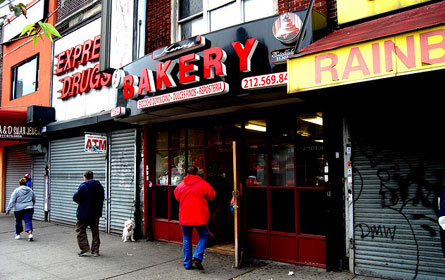 Photo by Paul Lowry
State Senate District 31 snakes through many of upper Manhattan's neighborhoods, including Inwood.

While Eric Schneiderman busily campaigns for state attorney general, four Democrats are vying for the State Senate seat he is vacating.

Assemblymember Adriano Espaillat, Democratic District Leader Mark Levine, State Heath Department attorney Anna Lewis, and community activist Miosotis Munoz all have thrown their hats in the ring. Each of these candidates hopes not only to continue the work of the man widely considered to be one of the most progressive voices in Albany but also to answer the ubiquitous calls for ethics reform.

"This is a new breed of elected officials," said Munoz, a former aide to U.S. Rep. Charles Rangel.

Culture Clash?Incumbent Shirley Huntley faces an opponent almost 50 years her junior in a State Senate race in southeast Queens. And age is hardly the only thing that divides them.

An Opening for the GOP?: Republicans have a rare opportunity to gain an Assembly seat in the city as five candidates compete in northeast Queens.

Scandals Trump Issues in Queens Race: Assemblymember Barbara Clark and challenger Clyde Vanel discuss their race and the charges that dominate it.

Barbs in the Bronx: Assemblymember Peter Rivera and Democratic challenger Luis Sepulveda face off in a race that epitomizes the Bronx's political rivalries.

Fox Chases Hevesi: Attorney Joe Fox is trying to bring the anti-incumbent sentiment sweeping the nation into a race in Queens. His competitor, Assemblymember Andrew Hevesi, isn't buying it.

In Astoria, the Field Narrows: After one contender dropped out, only two candidates remain to vie for this seat in Queens -- even though no incumbent appears on the ballot for the first time in a decade.

Challengers Emerge to Take on Espada: In the 33rd State Senate District in the Bronx, the incumbent is the issue.

At a time when constituents are fed up with the state's political dysfunction, Espaillat's opponents hope his 14-plus years of Albany experience will hurt him.

"There's a desperate need for new voices with new perspective," said Levine. "I actually consider it an advantage to be running as a non-incumbent."

In an effort to capitalize on that supposed advantage, Levine has raised concerns about what he sees as several ethical lapses on Espailat's part.

Democrats Francesca Castellanos and Rafael Figuereo also filed signatures, but both have since dropped out. The winner of the Democratic primary will face Republican Stylo Sapaski and Conservative Raphael Klapper in November.

Vying for Money and Support

Espaillat -- with more than $260,000 in total contributions and over $100,000 in campaign cash as the campaign entered its final week -- also boasts a slew of endorsements from influential New York leaders, including Council Speaker Christine Quinn as well as Schneiderman himself. He also has backing from a number of unions, including the teachers and Local 1199 of the Service Employees Union.

All this, along with his years in the Assembly, makes Espaillat the frontrunner. Levine, though, is a close second. The former public school bilingual science teacher filed 12,000 signatures to Espaillat's 18,000 and has amassed more than about $240,000 in contributions. As the campaign went into the last month, he had the largest war chest with more than $146,000. He has also racked up some endorsements from unions, local Democratic clubs and public figures like City Councilmember Diana Reyna. And he has some star power on his side. His major contributors include actors Matt Damon and Ed Norton.

Lewis has reported about $6,000 in contributions, but filed 11,000 signatures. She has sought to stress her support for same sex marriage, although Espaillat and Levine also support it. Munoz has raised slightly more than $20,000.

District 31 comprises many of Manhattan's northernmost neighborhoods, including Washington Heights, West Harlem, the Upper West Side and Morningside Heights and extends into the Bronx. Although ethnically diverse, Hispanics, notably Dominicans, account for the largest share of voters. Amid a myriad of concerns and campaign promises, two issues loom particularly large: housing and economic development.

All four candidates complain about living conditions in the area. Each has vowed he or she will made it a priority to protect tenants from skyrocketing rent costs, greedy landlords and overdevelopment.

"There are desperate needs in the district," said Levine, who said that, if elected, he would advocate for stronger tenant protection laws and affordable housing development. He would want to end Vacancy Decontrol, which removes an apartment from the rent-control program once a tenant leaves.

Munoz also pledged to repeal Vacancy Decontrol. She said she plans to ensure that a steady stream of funding exists for programs and organizations to help tenants negotiate with their landlords.

"We already have programs to help people who need representation in court," she said. "Those programs are understaffed and overwhelmed."

Anna Lewis is a board member at the Mitchell-Lama Residents Coalition, a tenant advocacy group affiliated with the state affordable housing program. She hopes to improve current public living facilities and strengthen city housing standards. For example, while developer now can get public funding if they set aside 20 percent of apartments in a project for affordable housing, Lewis would seek to raise that to 40 percent.

Espaillat, who chairs the Assembly's small business committee, pledged to continue the work he has done in Albany economic development in his district. Last year, he worked with Con Edison and the Hispanic Federation to provide free energy efficient equipment to small business owners in his district. He also pointed out his role in creating the $25 million small business fund in this year's state budget from allows merchants to get low-interest loans of up to $125,000.

Munoz plans to combat soaring unemployment rates through job training programs. She also said she would work with Wall Street, providing firms with tax incentives to invest in and offer loans to small businesses.

"We need to go where the money is," she said.

Economic issues are "really tough", said Lewis. While campaigning, she overheard a recently unemployed construction worker bemoaning his situation to a friend.

"He said, 'What am I supposed to do now?' and I didn’t really have a good answer for him," she said. She suggested real estate development could bring jobs to the community -- if the hiring process is closely monitored.

"I'm not against development, but it needs to be smart development," she said. Levine, who founded Neighborhood Trust, a community credit union that frequently provides low-income residents with small business loans, said economic development is a top-priority.

"The state could do much more," to help struggling business owners cope with obstacles like rising rent and insufficient access to capital, he said.

Despite his pride in Neighborhood Trust -- and the non-profit that helps fund it -- Levine currently is taking a leave of absence from its board.

"I don't think state lawmakers should ever be directing funds toward groups that benefit them, their friends or their family members," he said. "I think the rules should be tightened to prevent lawmakers from steering resources to businesses to which they have any connection at all."

Levine may be trying to draw a contrast between himself and Espaillat. The New York Post recently reported reported that the Assembly member helped steer state funds to the Northern Manhattan Coalition for Economic Development, a non-profit that employs several of his associates, including sister-in-law and his former chief-of-staff. Though Espaillat has denied having a role in the hiring process, he shares an address with the organization.

Levine has requested that state Attorney General Andrew Cuomo investigate the arrangement between Espaillat and the coalition.

Critics have also charged that Espaillat hired a journalists to work for the Assembly who, at the same time, wrote opinion pieces in Dominican papers praising Espaillat.

Espaillat has made campaign finance reform and independent redistricting top priorities in his campaign. He and Schneiderman spearheaded the successful effort to repeal the system that counts inmates in the district where they are incarcerated rather than their home districts.

"It is obvious that the Senate needs to change dramatically," Espaillat said.

Anna Lewis, who enjoyed a three-year stint on the Assembly's Committee on Oversight, Analysis and Investigation, said one vital way to achieve reform is to create an independent commission to oversee and decide on ethical matters concerning the state.

"It would be more credible if it were independent," she said.

With Rangel in the spotlight for multiple ethics violations, Munoz asserts her independence from her former boss and maintains her commitment to reform.

"That's what it means to be progressive, to be transparent," she said.

Perhaps the biggest challenge facing all of four potential state senators is engaging voters. Many residents of the district don't know who their local representative is, let alone that there is an election coming up. Ivy Parker, an Upper Manhattan resident, complained that candidates devote plenty of time to their district during campaign season, and once elected, vanish.

"Once they get into office, they have their own rules," she said. "They don't connect."