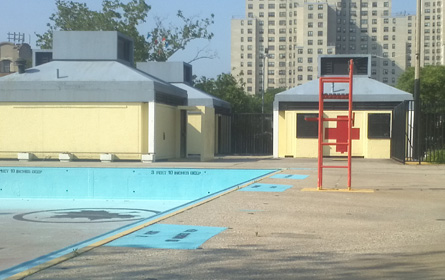 The heat of the late-afternoon sun beats down on the dry floor of the Douglass and DeGraw "Double-D" Pool in Boerum Hill, Brooklyn. The pool's entrance gate is padlocked. Not a soul lurks on the premises.

New York City's outdoor pool season does not begin until June 29. But some city residents face the prospect of seeing their community pool remain as devoid of life and water as Double-D Pool is now for the entire summer.

For the second straight year, Mayor Michael Bloomberg has proposed cuts in funding for New York City swimming pools to help close the city's budget gap. The budget proposal for fiscal year 2012 calls for the closure of four, as yet unnamed, city swimming pools and a shortened season for all pools.

Last year Double-D Pool, along with Wagner Pool in East Harlem, Fort Totten Pool in Queens and West Brighton Pool on Staten Island were slated for closure. Additionally, all of the city's 54 pools were set to close two weeks earlier than the usual Labor Day end date.

Fortunately for pool-goers, the City Council restored a portion of funding to the New York City Department of Parks and Recreation at the 11th hour. This move saved the four pools from closure and allowed the summer pool season to continue through Labor Day.

"When I first heard it, I was like: they're not going to cut it. That pool is too popular; kids play then go swim there," said Michael Norman, a 16-year-old resident of Boerum Hill and frequent visitor of the Double-D and other Brooklyn swimming spots. "This park is really, really popular, not just in our community but communities in Redhook and [Park Slope]. And, they come from all around just to go to that pool."

Less Money to Go Around

It's difficult for many city residents to fathom the possibility of their local pool closing down for the summer, yet keeping the pools open presents a greater challenge this summer than it did a year ago.

"It will be difficult because there are other competing interests that may take some of the priority away from swimming pools," said Peter Stein, president of lifeguard supervisors for the union District Council 37. "The budget in general has significant other things that seem to be catching more attention."

Bloomberg's proposed layoff of over 4, 000 teachers and his plans to close 20 firehouses may be among those "other things." These cuts, along with decreases to social service programs in the mayor's executive budget for 2012, are likely to receive the most attention.

The Parks Department, which runs the city pools, will be cut further from last year. The mayor's budget calls for the city to spend about $222 million on operations for the Department of Parks and Recreation, a decrease of nearly 7 percent from fiscal year 2011, according to New Yorkers for Parks.

"One of the more unfortunate trends in this city in the last few decades is the feeling that park services are a luxury rather than an essential city service," said Alyson Beha, director of research, planning and programs for New Yorkers for Parks. "We have millions of kids who will be out of school this summer and they do need safe places to spend their days, and more often than not, those city parks and beaches and pools are the spaces that they go to."

The estimated cost of keeping the four pools open and all city pools operating until Labor Day is just over $1.4 million. The mayor has said that communities across the city will have to sacrifice some valuable services during these difficult economic times. He has not yet said which communities would have to give up their pools.

"It's a balancing act isn't it?" said Adam Tucker, a 41-year-old resident of Park Slope and father of one. "But if I was in charge of the purse-strings, then the development of youth services and amenities for the local youth would be fairly high on my list of priorities."

The Fight to Save Pools

The summer of 2010 was the hottest on record in New York City, and attendance rose significantly at three out of the four pools that had been up for closure.

Not only did these communities demonstrate the value of their local pools by showing up, but when funding was still in flux, a number of residents launched campaigns to save their local facilities.

The Parks Department has yet to release an official list of the pools up for closure. Manhattan Borough President Scott Stringer's office said that it received preliminary briefing documents that slated Wagner Pool for closure despite increased numbers in attendance last summer.

City officials from other boroughs who were contacted said they were still unsure what pools in their communities would be on the chopping block.

Despite the uncertainty, community members aren't wasting any time mobilizing. Another Facebook page, which is advocating for all city swimming pools for summer 2011, has already been created called Save NYC Public Pools. The group has over 150 members so far.

Organizations such as DC-37 and New Yorkers for Parks have testified and demonstrated at City Hall budget hearings. They're also petitioning to and collaborating with City Council members and other city officials to try to save pools.

With the budget deadline still more than three weeks away, it's too early to tell whether the groups will succeed in saving the pools. Even with the concerted efforts, those who hope to restore funding for the second year in a row face an uphill battle.

If city funding for pools were to fall through, a wealthy benefactor could step in and save the day. The Sol Goldman Family did this in the summer of 1991, when it donated $2 million to city pools to prevent the season from ending early.

"A philanthropist known as the mayor might be willing to donate $2 million to the pools," Stein said, half-lightheartedly and half-seriously.

New York City's pools have weathered economic downturns in the past. Some of the greatest pool construction projects occurred during the Great Depression. Eleven city pools were built in 1936 alone through the New Deal's Works Progress Administration.

That would not surprise Tucker.

"It's a vital resource. If these were to disappear, then you'd have the unpalatable prospect of traveling long distances to pay a lot of money," Tucker said. "I mean the virtue of this thing over here is that obviously it's free, and it's very pleasant and amenable."