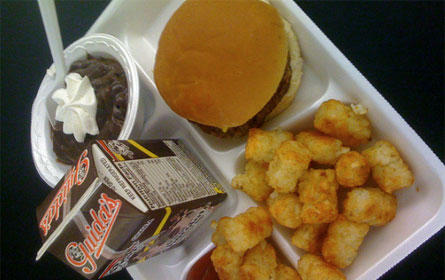 In Brooklyn’s PS 321 in Park Slope, it is second-grade lunch period and the adjoining lunchrooms are a controlled cacophony of happily eating kids. Children carefully balance trays from the cafeteria to the long white lunch tables. On those trays a small apple wobbles beside a grilled cheese sandwich, a serving of salad and some mixed cooked vegetables.

The cafeteria has a water cooler and twin water fountains, as well as crate full of small cardboard cartons of milk. On one wall display the word “Yum” hangs below photos of smiling students eating fruits and vegetables. The school, which serves over 1,400 kids in pre-K through 5th grade, incorporates a “healthy choices month” into their classroom learning. They also uses students to talk to other students about what is and isn’t good in their lunches, and works with school food staff to incorporate those findings into meal planning.

Despite the success of efforts like those at 321, school officials and health advocates still face many obstacles to getting children to eat better. Even the best school lunch program can falter in the face of all the junk food options available on city streets and in the disdain of notoriously picky eaters. And, as the recent vote by Congress to consider pizza a vegetable makes clear, institutional obstacles remain as well.

Assistant Principal Ryan Bourke says PS321 works to teach students the importance of healthy eating. In an organic garden in the school yard, kids learn about growing vegetables, and occasionally parents come harvest those crops into salads for students to sample. While the majority of students bring their food from home, Bourke says he believes that to be changing, especially when certain foods are offered. “Pizza day they love,” he said, smiling. “Chicken they love.”

In October, Manhattan’s P.S. 75 on the Upper West Side became the first school in New York City to receive a HealthierUS School Award. The school added more fruits, vegetables and whole grains to kids’ lunch, and also installed a water cooler, earning them a bronze award. The school’s website offers “snack guidelines” for parents, to guide them in the sorts of foods they send their child to school with. The guidelines encourage parents to send kids to school with a refillable water bottle, and discourage things like store-bought muffins and fruit roll ups.

While not all schools have the resources to provide students with these sorts of experiences, citywide regulations on school food are among the strictest in the country. Regulations like the 2009 ban on most bake sales also place limits on what can be sold in school vending machines and stores.

Yet even the healthiest of school options cannot negate the options available after school. A recent study from researchers at Columbia University’s Mailman School of Public Health looked at the availability of junk food sold near public schools in the city, using data on school locations from 2006-2007. The abstract gives a lot of insight into why healthy school lunches are only one step toward maintaining healthy children.

Even in affluent Park Slope, where students who go off campus are more likely to purchase healthy foods like sushi than a McDonalds hamburger, schools hope to encourage more eating of school food. PS 321 has recently been engaging in an effort to destigmatize school lunches and eating in the cafeteria. They are working to find healthy foods that kids like, and limiting the number of days that older students are allowed to eat lunch off campus.

Offering food that kids like is a big part of steering students away from the fast-food. While some schools seem to do that quite well, others have been less successful. At the Young Women’s Leadership School in Astoria, students have created a blog about the quality of the food, and while many of their comments seem to express normal kid pickiness, a look through the posted photos is instructive.

Removing sodas from school may not have the hoped-for effects on children’s health either. In a nationwide study published in The Archives of Pediatrics and Adolescent Medicine, researchers found that in schools which banned soda but allowed other sugary drinks, students just consumed more sugary drinks. More alarmingly, in states that banned all sugary drinks in schools, students’ overall consumption of sugary drinks still remained constant â€“the kids just upped their intake elsewhere.

Then there is the issue of pizza as a vegetable. This month Congress blocked an effort by the Agriculture Department to create stricter guidelines to ensure that schools served fruits and vegetables. Currently schools are able to claim credit for serving a vegetable even for the watered-down tomato paste present on a slice of pizza. The New York Times reports that food companies including ConAgra, Coca-Cola and frozen pizza-maker Schwan praised the decision as reasonable.

Here in New York, Amie Hamlin is not pleased by the decision. “The whole point” says Hamlin, frustration audible in her voice, “is to have more nutrient-rich vegetables that are low-calorie.” Blocking it, she says, was “really dumb.”

Hamlin is the Executive Director of The New York Coalition for Healthy School Food (NYCHSF),a statewide nonprofit that advocates for healthier plant-based school lunches and increased school nutrition education. In New York City, NYCHSF partners with others to bring whole-food healthy recipes into 17 NYC public schools, twice a week. Her organization provides recipes that use ingredients that schools already have access to, and trains staff in how to prepare them. They also provide a “Wellness Wakeup” program, giving principals short bits of nutritional information to be read over school intercoms in the mornings.

Not every school in New York City has a cafeteria, and not every cafeteria has cooking facilities. Hamlin estimates that in NYC’s 1500 schools there are about 1200 cafeterias, due to colocation of multiple schools in a single building. Of those, some are only equipped for reheating and serving.

Still, Hamlin says, the demand for healthy food in schools is strong. While her organization only serves 17 schools, there are 48 more on the waiting list. Hamlin says NYCHSF is constrained by a lack of funds and volunteers. “We need more people power to do it,” she says, adding that volunteers with NYCHSF also go into school lunchrooms with the raw ingredients of the meal, to allow students to touch and see and smell the foods. The organization plans to collect data regarding how much of their food is consumed or thrown away.

Income-eligible in New York City public schools are entitled to eat lunch for free or at a reduced rate of twenty-five cents, other students pay $1.50. That price may increase next year due to a provision in the federal Child Nutrition Bill that mandates that the price of school lunches better reflect the cost of preparing the meals. Those higher prices may pose a challenge for families ineligible for the reduced rate but still struggling financially. DOE spokeswoman Marge Feinberg said it is “too soon to know” whether New York City students will have to pay more next year, but pointed out that it costs the Department $2.60 on average to produce a meal.

DOE would not permit an interview with the Steven O'Brian, the Director of Food and Food Support, but sent a statement saying New York Schools are “ahead of the curve when it comes to making school food more nutritious” and citing their efforts to eliminate trans fats and reduce sodium, fat and calories. “The Department serves over 820,000 meals a day and purchase a large volume of goods each year. For example, we purchase 15 million apples a year, 400,000 pounds of chopped Romaine lettuce and 4,000 pounds of cucumbers, 99,000 pounds of broccoli florets, to name a few. “

Still, the Department has no way to track what gets eaten and what gets thrown away. The reticence of the Department to speak to the press may be due to recent criticisms brought on after a school food internal website with nutritional value for the food was accidentally made public. The site was quickly removed and the link now brings up a message that the file or directory is not found, leading some critics to wonder why the DOE would not release nutritional information to parents.

Back at PS321, kids are finishing lunch and squirming onto their jackets in anticipation of the playground. Patient lunch aides help locate hats and zip zippers. Several second graders hop up and don badges designating them as Healthy Kids CafĂ© Student Representatives. One representative, a tall pretty girl with bright plastic beads in her braids, circles the room, seeking out the kids with school lunches and asking them how they liked the food. One after another after another, the students give her a thumbs-up and a smile.