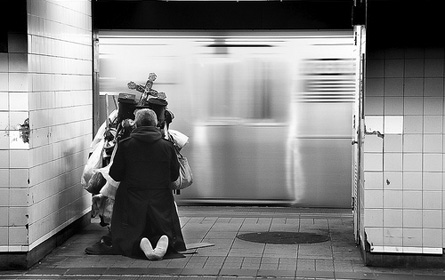 Last month, Mayor Michael Bloomberg created a firestorm when he told reporters, "There aren't many panhandlers left" on the subways.

Bloomberg expanded on this the following day when he suggested panhandling in general had also declined.

To advocates for the poor and the homeless, these comments only reinforced their view of the mayor as being out-of-touch. Joel Berg, executive director for the New York City Coalition Against Hunger was quoted as saying he would "love to live in whatever city the mayor lives in -- it's an entirely different one from the one that I and 8 million other New Yorkers live in."

Bloomberg's remarks came as his administration moves to eliminate Advantage, the city's controversial rent subsidy program designed to provide permanent housing for homeless families. The city has said it cannot afford the $140 million Advantage costs. It also has indicated that Advantage may have encouraged some people to claim to be homeless in order to get city aid.

While advocates for the homeless have long criticized Advantage, they worry about what, if anything, will replace it. "Right now, the Bloomberg administration has no policy for helping homeless families move from shelters to permanent housing. And Mayor Bloomberg is the only NYC mayor since modern homelessness began not to have such a policy," Patrick Markee, senior policy analyst for the Coalition for the Homeless said in an email.

The city, though, says its policy focuses on families before they go into shelter. "We will continue to emphasize linkage to employment and services to employment” as the most effective way to prevent homelessness from occurring in the first place," Commissioner for Homeless Services Seth Diamond said.

The mayor's executive budget calls for a 6 percent cut in homeless services, including the elimination of the Advantage program. This will total $22 million in savings, Diamond said in recent testimony before the City Council’s Finance and General Welfare Committees. City Council may be able to restore some of those services as it has done in the past.

In the meantime, though, the courts have stepped in. Last week, a state appellate court ruled the city must continue the Advantage program until September, when it issues a final decision in the case. While recipients expressed relief, the administration criticized the court's action. "At a time when the city is already forced to make major cuts due to the state budget," Diamond said in a statement, "we will now have to shoulder a new bill of $15 million each month that we simply cannot afford, which will mean more cuts to other city services."

The effort to eliminate Advantage along with cutbacks and changes in other programs, basically leaves the city with very few tools left to combat homelessness beyond placing people in shelter.

The city's effort to cut Advantage leaves the approximately 15,000 households who were enrolled in Advantage -- and thousands more who had been accepted into Advantage but had not started the program -- basically out of luck. In March, Diamond sent a letter to local real estate brokers to inform them no new Advantage enrollees would be accepted.

With these vouchers, recipients had to pay 30 percent of their monthly income in rent for the first year and 40 percent for the second year, with the city making up the rest. Families could receive vouchers for no more than two years. Advantage working families have average rents of around $1,000 a month and average incomes of around $1,100 amonth.

Annabel Palma, who chairs the City Council's general welfare committee, said enrollees were reporting back to her they had been told by their case workers to "rip [their Advantage voucher] up and throw it out."

State Assemblymember James Brennansaid the city should have made plans for the funding shortage. In the state budget "New York City took tough hits," that Brennan said he believes were "a little unfair, ... but the city's been unrealistic, the writing was on the wall a year ago."

Shut Out of Public Housing

The city's decisions leave the homeless with few places to go. For years, homeless families could turn to federal programs for assistance. But in 2004, that changed as the Bloomberg administration unveiled an ambitious five-year plan called Uniting for Solutions Beyond Shelter, which was supposed to cut homelessness by two thirds within 10 years. Linda Gibbs, the current deputy mayor who was once commissioner for Homeless Services, is widely believed to have been behind the decision -- part of the 2004 program -- to cut off the homeless from federal housing assistance like Section 8 vouchers.

The city also stopped making units in projects run by the New York City Housing Authority available to the homeless. This continues to be the prevailing policy.

Administration officials have frequently expressed concern that opening Section 8 vouchers or NYCHA apartments to the homeless would crowd out other low-income New Yorkers. “Most New Yorkers work every day," and must pay their rent without any subsidy, Diamond said.

"NYCHA units are for people in the communities, not people in shelters," he has said.

Furthermore, Diamond said, "The reality is that there is no Section 8 available," and years-long waiting lists for NYCHA.

The city housing authority has some 180,000 apartments. It expects to admit about 5,800 new families over the course of the year. Currently, 144,00 and 120,000 people are awaiting public housing and Section 8 vouchers, respectively.

As to the Section 8 vouchers, Markee confirmed none are currently available for the homeless or anyone else. He expressed hope "there may be vouchers available in 2012 and beyond depending on the economy and budget decisions made by Congress." However, given Congress' efforts to slash spending, that seems unlikely.

Markee said the state would like the city to once again let the homeless participate in federal programs. Gov. Andrew Cuomo "is behaving differently" from previous governors, Markee said. "He gets what needs to happen and the best way is [through] federal housing programs" to combat homelessness.

Even if it had vouchers to distribute or vacant apartments in public housing, city officials say giving this help to a homeless family could entice some families who might otherwise be able to find a home on their own to become homeless.

Palma dismisses this notion. "I was homeless," she said. "I didn't wake up one morning and say to my son, 'Let's go be homeless and let's get a NYCHA apartment.' It’s not reality."

Last year, the city also reportedly cut some 200 eligible families from homeless prevention services called Homebase. According to its website, this "is a city-wide program designed to help families and individuals overcome immediate housing problems that could result in becoming homeless, and to develop a plan for long-term housing stability."

Advocates condemnedthe cutback as a cruel experiment by the city.

The administration, though, says the move was essential to evaluate the program's effectiveness. The city is "committed to enhancing Homebase," Diamond said in an inteview, but "there are questions about the program after the stimulus money goes away."

In addition, there are plans for some reductions to the homeless youth program operated by the Department of Youth and Community Development, according to recent testimony by Commissioner Jeanne Mullgray. After 10 rounds of budget cuts where this program remained intact, which "speaks to how valuable the program is," said the youth department's chief information officer, Andrew Doba, outreach and drop-in centers were slashed in December because the department's "focus has been to provide beds." The council was able to restore that funding.

Now, though, because of the state budget, the city plans to cut 14 beds out of approximately 200 in the FY2012 budget.

Meanwhile Diamond has supported the idea of having young mothers with children under 10 share apartments. Because this is currently illegal, city law must be changed to allow for this. The city Independent Budget Office reports this plan "would affect 2,560 homeless families â€¦ saving $4.5 million in city funds in 2012 and $9.1 million in future years."

Other than apartment sharing, if the city has an alternative to Advantage, it is a familiar one: shelters.

In his letter and in testimony, Diamond said the cuts in state support and resulting reductions in Advantage and other programs would compel the city to ultimately build 70 new homeless shelters.

While shelter costs are shared between the city, state and federal governments, the city bears sole responsibility for housing programs, such as Advantage, according to Diamond. "We need more of a shared responsibility," he said in an interview.

Markee, though said that already exists. "The state’s position was (and has been) that the City of New York, like other localities in New York State, should use some of its own housing resources (like public housing) to address the problem of homelessness. Then the state will help," he explained in an email. And, Markee added, the city always has the option to pay for Advantage in its entirety.

The city spends about $3,000 a month to keep a family in a shelter.

A recent Independent Budget Office analysis of the Mayor’s Preliminary Budget confirmed shelter use would probably increase with the elimination of Advantage. "It is likely that some â€¦ would be unable to pay their rent and would return to the shelter system if the program ends," the report said.

The office examined two different scenarios for 2012. If 30 percent of households now receiving Advantage had to return to emergency shelter, the analysis projected, spending on shelters would increase by $279 million or 40 percent above the amount now budgeted for fiscal year 2012. Of this, the city would be responsible for $115 million. The Independent Budget Office's other scenario had 70 percent of households return to shelter, ratcheting shelter spending up $455 million -- a 66 percent increase -- with the city bearing $188 million.

Palma, though, said she has not seen where the money for the shelters will come from. "Wouldn't it be cheaper to invest in permanent housing?" she asked.

To advocates, the latest shift in efforts to deal with homelessness represents a failed philosophy and marks the latest in a series of unsuccessful tactics.

The elimination of Advantage may be about more than money. Certainly the program did not dramatically decrease homelessness in the city. Last year, the Coalition for the Homeless issued a report documenting what it saw as the failure of programs such as Advantage, calling them "a revolving door back to shelter."

In general, Berg said, the administration suffers from a "fairly distorted notion." They think, he continued, that "at the root of the problem is behavior. â€¦ They see people in a vacuumâ€¦that homelessness is a personal failing," and do not consider the state of the economy.

Advantage and its predecessors failed because of poor planning, Palma said. When the city was creating "programs for the most vulnerable â€¦ it wasn’t including [the relevant] stakeholders at the table."

Palma emphasized, "The city has been intent on keeping people out â€¦ and creat[ing] obstacles."

As bad as Advantage was, Palma said, offering nothing is worse. "There is absolutely not a replacement in the pipeline," she said. Though the state is giving the city $15 million dollars to fight homelessness, Palma added, "it won't be to create a [new] rental subsidy program."

What it will be for, though, remains unclear.