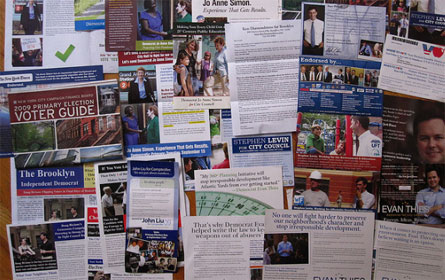 Democratic elections are built on a covenant of trust. That is why disclosure of money in politics is fundamental to the democratic process. Information about how and where a candidate raises money can provide clues about the way he will act behind closed doors, and arm citizens with the knowledge to hold him accountable for his public actions once he is elected. Without disclosure, voters may feel as if they are unable to make a truly informed choice at the polls.

The U.S. Supreme Court has consistently recognized that the public's interest in disclosure is important enough to require that candidates and others show the public how they raise and spend money. Public disclosure helps potential voters evaluate candidates for office, empowers the public to act as watchdogs, and ensures that all participants in the electoral system play by the rules.

Disclosure of fundraising by the candidates is important, but it is not sufficient. A complete view of money in the political system also requires that other entities, including political action committees, 501(c)(4) groups, corporations, and unions, disclose the money they raise and spend to influence elections. Most candidates know who funds the independent television ads and glossy mailers that sing their praises and denounce their competitors. Without robust disclosure, the general public does not.

The Supreme Court's decision in Citizens United cast the need for strong disclosure laws in sharp relief. Even as it opened the door to unlimited campaign spending by corporations and unions, the Court suggested that disclosure of the new spending would “provide shareholders and citizens with the information needed to hold corporations and elected officials accountable for their positions and supporters.” The aftermath of Citizens United, of course, revealed a different story. Multiple holes in the federal disclosure laws were quickly exposed and exploited, as upward of $100 million in “dark money” was spent during the 2010 midterm elections without any disclosure of its sources.

Our own analysis of the past two city elections have shown an increasing amount of these independent expenditures in New York, a trend we expect will continue. Though New York City's public matching funds system has long provided a model for jurisdictions seeking to moderate the influence of big money, a gap in disclosure requirements has kept the details of independent spending hidden from public view.

In the wake of Citizens United, New Yorkers voted in November 2010 to close that gap, approving an amendment to the City Charter to require public disclosure of independent expenditures made “to influence the outcome of a city election or referendum.”

To administer the new disclosure mandate, in September we issued proposed draft rules on disclosure for public review. They are designed to meet the aims outlined by the Commission and validated by Supreme Court precedent: to help members of the public evaluate messages aimed at influencing their votes; to help the public hold candidates accountable for their supporters; and to help ensure that candidates are complying with City law.

For disclosure to be meaningful, it should be as inclusive as possible. Voters who pay attention during election season know that most campaign messages do not rely on straightforward words like “vote for” or “defeat.” Disclosure requirements limited only to expenditures for messages like these that constitute “express advocacy” would keep most independent political spending in the dark.

Our proposed rules take a more realistic view. Though it may mention a public policy issue, a mailing sent before an election declaring that “Candidate X is extremely out of touch with New York City” or “Candidate Y is wrong for Brooklyn” may have no reasonable interpretation other than as an attempt to influence the outcome. These are effective campaign messages. In many cases, they are written to evade the express advocacy standard and escape scrutiny. Any meaningful disclosure requirement would allow the public to see which interests are paying to broadcast them.

Similarly, the nature of some organizations requires a thoughtful approach. "Super PACs" or 501(c)(4) groups like American Crossroads or Priorities USA are formed specifically to influence elections. Other organizations exist to advocate for a cause (like the National Rifle Association) or for the interests of their members (like a labor union). Some of these groups may get involved in elections, but they also work to educate their members or engage in grass-roots lobbying around specific issues. Our proposed disclosure rules aim to govern spending on campaign materials while allowing groups to fulfill their mission without additional layers of regulation. We have received many comments on this issue, and we will consider further changes before adopting the final rules.

In 2013, disclosure of independent expenditures will provide New York City voters for the very first time with a complete view of the money that is raised and spent to influence the outcome of city elections. Any voter will be able to go online and view financial information for city candidates and the independent groups who support or oppose them in a single place. In the next mayoral election, New Yorkers can trust that all spending by and for the candidates will happen in public view.