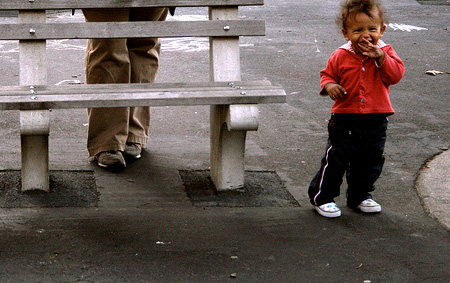 photo (cc) a rose from charlie

With a pert smile, S. kept a tight watch over her baby boy's crib in her modest, brightly painted Bronx apartment. It was a mundane scene, but in light of what she had gone through a few months earlier, S., who asked to remain anonymous, kept her joy closely guarded.

Last year, S. saw her baby taken from her after a heated argument with her son's father ended with police intervening and taking her into detention. Soon, S. recalled in an interview, she found herself isolated at the precinct, while child welfare authorities placed the baby in the father's care. S. couldn't make sense of the decision: The Administration of Children's Services had not only overlooked the father's criminal record, she said, but also ignored an offer from S's mother to take temporary custody.

This is the third and final article in a series on the connections between the criminal justice and child welfare systems in New York City. Previously:

Going to Jail, Losing a Child -- When a mother goes to prison, she may have to give up her child as well as her freedom, and many families investigated for mistreating a child have had a member in prison. The two major institutions involved with protecting children interact in many families.

The Long Road Out of Foster Care -- Mothers who go to jail risk losing their children to the foster care system. Even if the families finally reunite, it can take years to repair the breach.

One Fanily's Story (video): Brenda Gittens talks about her journey through addiction and the child welfare system at a support group for mothers whose children have been removed. Her son Jacob's story was profiled in “The Long Road Out of Foster Care.” Jacob produced this video as part of an ongoing project of documenting his family's history. You can view it here.

In criminal court, S.'s case was quickly dismissed and the judge released her from detention. But it took weeks for her to wade through the family court process and scrutiny from children's services. Her contact with her baby was limited to supervised visitations; she even had to nurse her baby under the watch of an agency worker, S. recalled. "I was being looked at ... as a monstrous individual," she said.

Still, in a system where children may languish for months or years in foster care, S.'s separation from her son ended relatively quickly. Her rare example speaks to new strategies in the social service community to help distressed families cope.

In contrast to S.'s story, many troubled families get caught up in government systems. As parents and children try to deal with an array of interrelated problems -- such as mental illness, drugs, family violence, poverty and racial discrimination -- they get stuck in the bureaucracies that are supposed to hel them. But some advocates now recognize this web of crises and are trying new ways to enable families to untangle it.

S. got her son back, thanks to the Bronx Defenders, a public defender office that helps low-income families navigate the legal , welfare, housing and immigration systems. A lawyer, social worker and parent advocate teamed up to help S. deal with family court and criminal court simultaneously. This enabled her to arrange a visitation schedule and and support services, and regain custody soon after.

Kara Finck, managing attorney of the Bronx Defenders Family Defense Practice, said that in many cases, a child will be placed in care upon a parent's arrest, even if the charges are not related to the child's treatment. And even if the charges are later dismissed, their family court case will drag on, since the Administration for Children's Services will pursue its investigation of the parents' conduct independently. As their work continues, the child may remain with a relative or in foster care indefinitely.

If "a technicality in criminal court means you can't see your child for three months, and your child's three months old -- that's twice their life," Finck said.Over a family's lifetime, interwoven social and economic hardships can drive parents and children apart as they deal with police, courts, child protection agencies or some combination. Still, law enforcement and social service agencies may often operate separately without communicating -- despite research showing that in many cases, parents in the child welfare system have had past involvement with the criminal justice system or get arrested after losing their children. The bureaucratic dissonance, advocates say, can traumatize families, and could be avoided if agencies were more sensitive to the various burdens parents must juggle.

To harmonize those systems, groups like the Bronx Defenders have developed a holistic strategy for legal services. Attorneys know the ins and outs of the child welfare, legal and immigration bureaucracies, as well as how those institutions intersect when, say, a parent gets arrested in an immigration raid and her child winds up in foster care.

"The biggest thing that we're seeing within the system is this awakening that these children are present, and they bring with them a kind of extra burden," said Dee Ann Newell, a coordinator of http://www.sfcipp.org/rights.html national campaign to establish a Bill of Rights for children of incarcerated parents. "The stigma and the shame and the silence are for me the three S's that these children cope with, in addition to the fact that they have all these preceding risk factors."

A Web of Services

Since parents may see child-protection interventions as intrusive and humiliating, some groups use a "wraparound" approach focused on community bonds and group decision-making. Everyone, from siblings to grandparents to teachers, have a stake in planning a child's custody arrangement, for example, or a parent's drug treatment plan.

Carol Shapiro, a research scholar with Columbia University's < a href="http://iserp.columbia.edu/"> Institute for Economic and Social Research and Policy, said that agencies could improve outcomes if they just stopped treating clients as "people that need to be fixed, and instead, building on their assets. ... We respond much better to things we feel good about."

When she led the New York-based nonprofit Family Justice (which has since been incorporated into the Vera Institute of Justice), Shapiro put this concept to the test in San Francisco with Communities of Opportunity. In neighborhoods where poor families frequently encounter law enforcement and child welfare, the program immerses at-risk parents at the center of a network of services including probation authorities, school officials, and health and social service agencies.

Back in Brooklyn, the Women's Prison Association helps formerly incarcerated mothers cope with the challenges of transitioning back into the community. Clients are typically eager to reunite with their children, but must wrestle with unemployment, lack of housing or emotional instability. Federal laws limiting the time a child can stay in foster care further complicate the process of regaining custody.

The association's transitional housing facility, Huntington House, gives homeless, formerly incarcerated women a space to prepare for reunification with children who have been placed in foster care. The program places mothers in apartments shared by other clients, where they receive personalized employment and treatment services. After children return to their custody, mothers move into family-style apartments. Staff continue supporting the entire family until they are ready to move on to independent housing in the community.

"We have a built-in way to avoid the trap of housing being the last barrier to getting your children back," said executive director Georgia Lerner.

The group also works uses an intensive "home-based service model" to help women at risk of losing custody. Case managers visit women at home to give them what they need to keep their households running, whether it's support for staying clean, working with probation authorities, keeping up with court dates or signing up for food stamps.

When working with formerly incarcerated women, Lerner said, part of the job is acknowledging that reunification is not the only possible goal and regaining full custody may be out of reach for some women. The Women's Prison Association may instead help a parent devise an alternative custody setup, such as living with a relative under legal guardianship. The central aim, Lerner said, is to protect the parent's role in determining the healthiest care arrangement for the child, and to empower mothers to "make the best decisions and to be full, informed participants in the decision."

Many advocacy groups also believe police and other government agencies must change the way they treat parents and the children whose safety they are trying to protect.

The Osborne Association, a New York-based nonprofit that works with families affected by the criminal justice system, has drafted guidelines to help state and local law enforcement deal with children of arrested parents. The clinical language hints at the emotional tension of a police encounter: Officers are advised to "consider arresting, handcuffing and questioning of parents out of the view of their children," and to be conscious that "children may feel safer about the situation when compassion is shown to the arrestee." The San Francisco Children of Incarcerated Parents Partnership, a coalition of community groups, service providers and government representatives,has published a Children of Incarcerated Parents Bill of Rights as a reference for families, service providers and government agencies. The core principles include the right to regular family visits, the right to be "considered in decisions about a parent," and the right to a "lifelong relationship" between parent and child.

"When a parent is incarcerated, there's sort of an assumption that that that relationship is not as valuable as other parent-child relationships," said partnership coordinator Nell Bernstein. "And of course when a family is involved with child welfare, there's also an assumption of 'this is a bad parent.' Put those two together, and this is a family that is at tremendous risk of dissolution."

The Bill of Rights website features testimony by Ahmad, who was born during his mother's incarceration, adopted as a young child and reunified with his birth family as a teen. The turbulent journey taught him that the child welfare system ignores what matters most.

"All the system saw," he said, "was a drug-addicted mother. 'The baby could do better without her.' They wanted to protect little Ahmad. Why didn't they care about his mother? ... What would have helped me most is compassion for my mom. We have to bring the mom back, so the mom can be a mother to the child."

Michelle Chen is a freelance writer and a native New Yorker. This article is part of a series exploring the connections between the criminal justice and child welfare systems in New York City. The project was supported by a fellowship from the Center on Media, Crime and Justice at John Jay College of Criminal Justice.