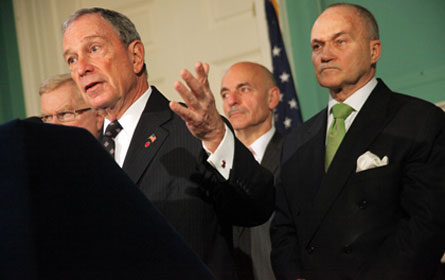 We must balance the protesters' First Amendment rights with the rights of the residents, workers, and businesses of Lower Manhattan. We must protect the protestors' right to peaceful assembly and the local community's right to a safe and secure neighborhood.

Today's actions include reports of excessive force by the NYPD, and reports of infringement of the rights of the press. If these reports are true, these actions are unacceptable. The council will seek answers to questions surrounding these reports and clarifying information regarding the arrest and treatment of Councilmember Ydanis Rodriguez.

In a spirit of cooperation, we must work to ensure that the protesters are allowed back into Zuccotti Park as soon as possible and are allowed to exercise their right to protest while not impeding on the rights of others."
--Christine Quinn, speaker, New York City Council

"Protecting public safety and quality of life for downtown residents, and guaranteeing free expression are not exclusive of one another. Mayor Bloomberg made a needlessly provocative and legally questionable decision to clear Zuccotti Park in the dead of night. That some media and observers were prevented from monitoring the action is deeply troubling.

"I know of no one -- protesters included -- who desires a permanent occupation of lower Manhattan. But provocations under cover of darkness only escalate tensions in a situation that calls for mediation and dialogue. I call on the mayor to find a sustainable resolution -- as other cities have done -- that allows for the exercise of free speech and assembly, with respect for the rights of all New Yorkers to peaceful enjoyment of our great city."
--Bill de Blasio, public advocate

"Going in and forcibly removing the protestors in the dead of night sends the wrong message. City Hall should have continued to talk with the protestors in the light of day if it wanted them removed, instead of evicting them in the middle of the night. There seems to be no compelling reason for this action at this time. The protestors have a right to be heard."
--John Liu, city comptroller

"I am greatly troubled by reports of unnecessary force against protestors and members of the media, including the use of “chokeholds” and pepper spray. I am also troubled by reports of media being forcibly kept away at a distance from these events. American foreign correspondents routinely put themselves in harm's way to do their jobs, in some of the most brutal dictatorships in the world. And their NYC colleagues deserve the freedom to make the same choice. Zuccotti Park is not Tiananmen Square. I call for a full explanation of police behavior in this evacuation.

The Need for a 'Reasonable Solution'

Community Board 1 has been clear that we oppose the use of force in this situation and oppose a forcible clearing of the park. We believe that there is a solution that allows the protection of OWS's First Amendment rights and also respects the quality of life for residents and small businesses. As we have consistently said, these two are not mutually exclusive and we urge the city to meet with OWS and work toward a reasonable solution. We are also concerned that the media was apparently prevented from being in the park during the eviction and cleaning. CB 1 staunchly supports the First Amendment right of the press to cover news events without interference from government.
--Julie Menin, chairperson, Community Board 1

"Although this action should have been taken weeks ago, we thank Mayor Michael Bloomberg for taking this difficult step to protect the public health and safety of our community. As a community group, we continue to consider all of our options, including litigation, if the mayor or the owner of the park, Brookfield Properties, ever again fail to enforce the clear rules of the park and the laws of the city, which are designed to protect the health and safety of our neighborhood."
--Linda Gerstman, spokesperson, Downtown Community Coalition, a group of downtown residents formed in response to the protests

Mayor Bloomberg’s forced cleansing of Zuccotti Park nearly two months into an unsanitary and sometimes dangerous encampment was just what the doctor had been ordering.

The amorphous agglomeration known as Occupy Wall Street had transformed a space intended for open community access into a round-the-clock shantytown — and they claimed that the First Amendment guaranteed their right to do as they pleased. This is not constitutional wisdom. This is self-important, self-indulgent bilge.
--Editorial, Daily News (For full text, go here.)

A Show of Force

The demonstrators were roused from their sleep, had their personal belongings, including tents, computers and other equipment trashed, and were kicked out of the park. The media were deliberately kept at arm's length and prohibited from being on scene or filming the eviction from helicopters above, a chilling violation of freedom of the press. These moves are reminiscent of the actions of petty dictatorships, and contrary to America's proud tradition of unfettered First Amendment rights, free of interference and censorship. This Administration has shown that it cares more about exercising power than protecting citizens and the freedoms we cherish.
--Assemblymember Linda Rosenthal, Democrat of Manhattan

'No One Can Evict an Idea'

In two short months, Occupy Wall Street has focused the world's attention on the deep frustration felt by working people about an economy that no longer works for the middle class. The 99 percent have seen good jobs disappear while the rich get richer and the big banks make billions with impunity. Mayor Bloomberg may have cleared the park for now, but Occupy Wall Street's message cannot be silenced. No one can evict an idea whose time has come.

"Now more than ever, CWA members will join the massive day of action on Thursday, Nov. 17. â€¦ The 99 percent are standing up against corporate greed and against a government that more and more puts the interests of the 1 percent ahead of the middle class."
--Chris Shelton, vice president, District 1, Communications Workers of America

"Occupy Wall Street isn’t a place - it's an idea, a movement that has brought national and international focus to the danger to our economy and our nation that we face because of growing income inequality. The UFT is happy to continue providing logistical support for the Occupy Wall Street in our building, and we will be joining the OWS protestors in their continuing efforts around New York City to bring economic fairness and opportunity."
Michael Mulgrew, president, United Federation of Teachers