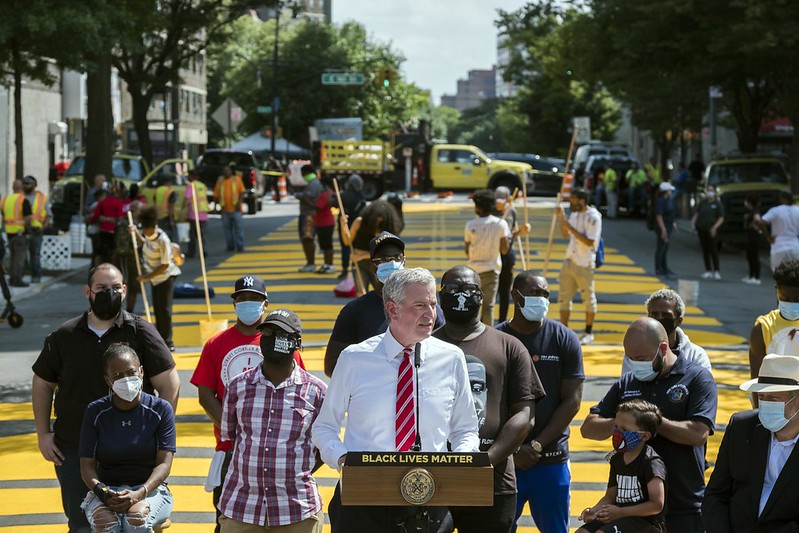 The mayor in the Bronx (photo: Ed Reed/Mayor's Office)

Mayor Bill de Blasio’s racial justice commission, which he officially created in March to confront and eliminate structural and institutional racism in the city and doubles as a New York City Charter revision commission, will release proposals for the 2022 general election ballot at the end of this year, just as the mayor ends his second term and leaves office.

The racial justice commission, which will hold its first public input hearing on Thursday, is a first-of-its-kind commission anywhere in the country and the second charter revision commission convened by the mayor in his two terms in office (another separate commission was also previously created by legislation passed by the City Council). Once the commission goes through its process it will vote on a set of questions to put to city voters for them to approve or disapprove proposed changes to the Charter, the city’s central governing document.

“This is unlike any approach you've ever seen in the history of New York City or honestly, in any major city in America, any state in America,” de Blasio said when he announced the commission, which he had first promised last year amid a massive wave of Black Lives Matter protests. “We've never had a model for actually addressing structural racism, institutional racism, identifying it, acknowledging it, formally apologizing for it, weeding it out, eradicating it, making the policy changes, changing the laws, doing the things that actually will have a lasting impact.”

The eleven-member commission is chaired by Jennifer Jones Austin, CEO of the Federation of Protestant Welfare Agencies, an anti-poverty nonprofit. “Our mission is essentially identifying in the City Charter those provisions, those laws that serve to perpetuate systemic racism and changing them or adding provisions that help bring about opportunities for greater access, for greater equity,” Jones Austin said in a phone interview.

The question before the commission, Austin said, is “Who holds power in this city, especially when it comes to making decisions for all New Yorkers?” Over the last eight days, the commission has held three “Transforming Foundations” virtual panels of experts, with one final session scheduled for August 3, to educate the public on racial equity issues including disparities in health and mental health, education, housing and infrastructure.

The virtual panels have been public facing but Thursday’s hearing on Staten Island will kick off the commission’s participatory process in earnest. “The purpose of these meetings is to ensure that people, everyday people like you and me, have an opportunity to share their views about what is necessary in this city to achieve racial equity,” Jones Austin said.

The commission will then hold several hearings across the city before it issues its preliminary report in the fall. That preliminary report will narrow down the commission’s focus and will be the subject of several more hearings before the commission issues its final report with a series of ballot proposals in December. Those proposals will then be presented to voters as a single or series of yes/no questions on the November 2022 ballot for their approval or disapproval. If a majority of voters approve of any or all changes, they go into effect as designated in the proposal, there is no further approval needed.

But the timing raises serious questions given de Blasio is setting this commission up to make proposals just as he leaves office and a new mayor is sworn in on January 1, with the ballot proposals and their implications then looming over the new mayor, City Council, and rest of city government for all of 2022. Any changes then approved will have to be implemented by that new government.

What happens with the racial justice charter revision commission after this December may be up to the next mayor, most likely Brooklyn Borough President Eric Adams, who won the recent Democratic primary for mayor and is expected to easily win the fall general election against Republican primary winner Curtis Sliwa and others. Jones Austin said the commission is reaching out to both major party mayoral nominees to get their feedback on the commission’s work.

“This commission, we're going to set it up that they can continue their work through this year and if they choose to into next year, and I think whoever the next mayor is, is going to value this work, and certainly look at these extraordinary leaders who are part of this commission,” de Blasio said when asked in March why he announced a process that would fall to the next mayor to implement. “[I] would advise in advance, since we don't know who the next mayor is going to be, I would advise them to take this model and keep running with it because this is work that we need to do until the mission is done, and I wouldn't be surprised if that's worth putting several years of effort in to,” he added.

A spokesperson for Adams did not respond to a request for comment.

Joseph Viteritti, a professor at Hunter College who worked for the city’s 1989 and 2010 charter commissions, raised concerns about the truncated timeline for the current commission to complete its work. “I think the more important issue around these is you want commissioners to have adequate time to do studies,” he said. “That's something that I think continually has been lacking in charter commissions, because they've been slapped together with very short timelines.”

One question that could possibly be raised before the commission is whether it should reexamine the recently implemented system of ranked-choice voting in primary and special elections. It was put in place through a ballot referendum that came out of the 2019 charter commission created by the City Council, not the mayor. Though it was overwhelmingly approved – in a low-turnout, off-year election – several elected officials, including Borough President Adams, raised largely unfounded concerns that it could disenfranchise voters of color. City Council Member I. Daneek Miller, an Adams ally who was among those members who unsuccessfully sued to delay the system from being used, has even proposed legislation for a new RCV ballot referendum in an “on year” such as the gubernatorial election in 2022, though that legislation appears unlikely to be passed this year.

After the Staten Island hearing, the commission will hold its next public input session on August 4 in Brooklyn.