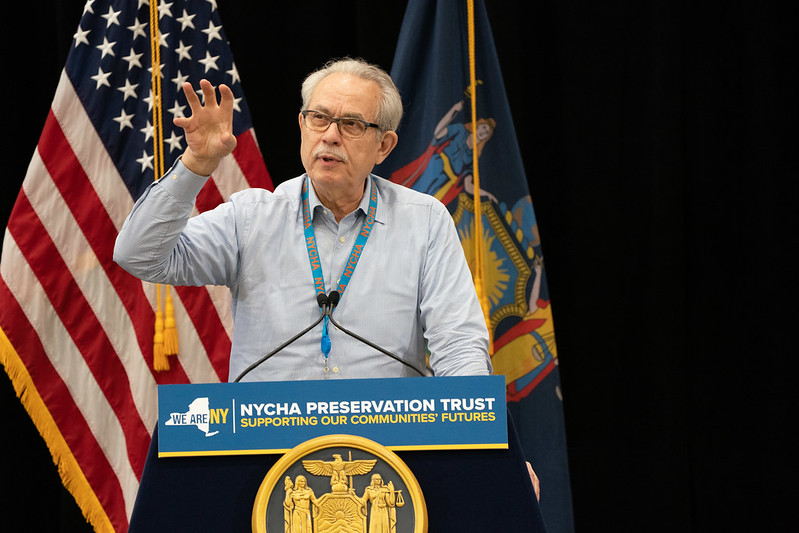 New York City Housing Authority (NYCHA) Chair and CEO Greg Russ spoke at some length Thursday morning about the recently-passed New York City Public Housing Preservation Trust, which promises a new fundraising mechanism to help repair 25,000 units of housing within the NYCHA portfolio, and how it figures into the larger picture of efforts being made to rescue the city’s crumbling public housing.

The event, part of the CityLaw series hosted by New York Law School, featured an introduction by Ross Sandler, law professor and director of the school’s Center for New York City Law, and also featured questions from Anthony Crowell, dean and president of New York Law School, and other participants.

"Today is a major win for all New Yorkers who call NYCHA home," Governor Kathy Hochul said last month about signing the bill, which she did at a celebratory Brooklyn event attended by Mayor Eric Adams, Russ, state and city legislators, and others. "This legislation will unlock additional federal funding and lead to billions of dollars in renovations—after decades of federal disinvestment—and provide for critical improvements for 25,000 apartments in NYCHA developments across the city.”

"This is a momentous day in the history of public housing in New York City and across the nation…," Russ said at the bill-signing. "The trust gives NYCHA the ability to raise billions of dollars in capital funds to be invested in its properties, and provides residents a true voice in the future of their homes.”

Mayor Adams has cited passage of the state bill creating the trust as one of the major initial victories of his tenure, which began at the start of this year. The legislation stalled over the past two years and was updated by the bill sponsors -- Assemblymember Steve Cymbrowitz and Senator Julia Salazar, both Brooklyn Democrats -- after input from many stakeholders, as part of the path to passage.

Also in June, Mayor Adams also announced that the transformation of NYCHA would be one of the five major pillars outlined in his administration’s new “Housing Our Neighbors” plan. Pieces of that pillar include amplifying resident voices, improving maintenance systems, streamlining resident services to reduce administrative burdens, and recapitalizing 62,000 units of NYCHA housing by 2028.

Founded as a Great Depression era housing program in 1934, NYCHA was created to help alleviate the pressures of the housing crisis at the time, and is considered to be one of the first United States agencies to provide residents with affordable and publicly-funded housing. The initiative also came before the 1937 Housing Act, which provided federal subsidies to local housing agencies in order to improve the quality of housing and living conditions for low-income families throughout the country.

Over time, federal support for NYCHA has become scarce, and the state and city have not made up the difference, with conditions at New York City public housing deteriorating into what is estimated to be a $40 billion backlog on capital repairs to ensure the 162,000 apartments home to more than 400,000 New Yorkers are in a state of good repair. NYCHA has also been home to rampant mismanagement and a lack of ownership from elected officials who often see the public authority as a political hot potato.

“NYCHA is a prime example of what happens when you put up a really sturdy property—one that in the beginning is designed well, services well—and then you go 60 years without putting deep investment into it,” said Russ, who was appointed to his position leading NYCHA in 2019 by then-New York City Mayor Bill de Blasio, not long after a new federal monitor of NYCHA was established due to the authority’s failures on child lead exposure and other issues. “It's one of the reasons that our current state of public housing is so dire; that there hasn't been this regular investment in real estate and the real estate of public housing. And that has been a problem, not only in New York, but throughout the country.”

The new trust is promised to allow for the investment of billions of dollars to restabilize participating NYCHA properties via funds raised by through the issuance of bonds and resulting capital for maintenance, renovations, and improvements to the properties. The repairs will combat health, safety, and basic quality of life issues like lead, asbestos, and mold, broken heating and elevator systems, and more.

According to the state law allowing its creation, the trust will allow residents to have the ability to vote on whether they wish to opt-in to the trust program or not, as well as be able to participate in future board elections and member selections. Residents must also be included in decision-making processes for which vendors will complete renovations at the developments, part of the legislation’s promise to provide more transparency throughout the process of repairing NYCHA housing.

Russ said the “twin effort” to rebuild NYCHA as an institution and its component apartments is also important in that it will help create opportunities for jobs and job training, along with allowing residents the time to focus on things other than the burdens of maintenance and dilapidated housing.

“One of the things about having units in the condition we have, is it robs individual family members and others of the chance to take some of the energy that they need to survive in that unit and then refocus it on their own pathway,” Russ said, emphasizing that the work to renovate and maintain existing NYCHA units will hopefully create the space for families to take care of themselves in livable, uncompromised units.

During the Q&A portion of the online event, Russ was asked by an attendee about the expected timeline of implementation of the trust, when its board will go into action, and when renovations on the units will begin.

Within the next three to six months, Russ said that all NYCHA residents can expect to receive hard copies of basic information on the trust, along with a copy of the legislation itself. Residents will also receive information on voting to decide if their properties will participate in the trust programming to access capital for repairs, as required by the law.

Russ said he also hopes to have more information available within the same period for the election process to the trust board, which will be made up of nine members in total, five appointed through NYCHA and four by city government.

Repairs and rehabilitation of the NYCHA properties that participate in the trust program are expected to begin in 2024, though Russ said they could start toward the end of 2023.

Another attendee asked if there will be rent increases to come along with the changes, but Russ said that the rent formula for NYCHA eligibility will remain the same, meaning that residents will continue to pay no more than 30% of their adjusted incomes toward rent, and that apartments will continue to be restricted to low-income residents.

Still, Russ said it is likely that rent adjustments will be made in some cases for units that pay fixed rates for various reasons, but that NYCHA wants to make sure changes are modest. “We're not looking to sock people with big rent increases in any form,” he said.

Crowell then joined Russ for further discussion, including on long-term challenges NYCHA has faced with funding.

“We have undercapitalized this program, and over-regulated it in some ways…And I think those two things together, lack of capital and lack of flexibility, have made the program really difficult to manage, and have contributed heavily to where we are today, in this city and other cities around the country,” Russ said about the lack of investment faced by NYCHA over the years.

Crowell also asked Russ about what further commitments will be seen by the current administration and the federal Department of Housing and Urban Development (HUD) in order to continue to preserve public housing institutions like NYCHA.

Russ acknowledged that HUD helped to support the process of passing the trust by sending letters to the State Assembly and Senate, which he called “unprecedented” and something he’s never seen the department do.

But, looking at a nationwide approach to public housing programs, Russ said that the country’s current administration needs to address the shift toward project-based voucher portfolios that is occurring, and how the programs will be impacted by the upcoming election.

“In the near term, we'd have to think about what kind of investments could be put in those budgets that could get passed before we have a new congressional group to deal with,” he said, alluding to the upcoming congressional elections that will determine if Democrats can hold on to their slim Senate and House majorities.

Still, Russ said he and the rest of the agency are looking forward to future opportunities to continue to work with HUD and other government agencies.

Sandler closed the conversation by bringing attention to an earlier Citizens Budget Commission meeting he had attended, where Russ discussed the future prosperity of NYCHA, and his goal to restore trust in the institution.

“His goal was this: can NYCHA be believed? And I think the transparency and the conversation like this is extremely helpful in making that happen,” said Sandler. “And if you can get people to believe what NYCHA says, then you will have accomplished a huge amount and made this a better city.”