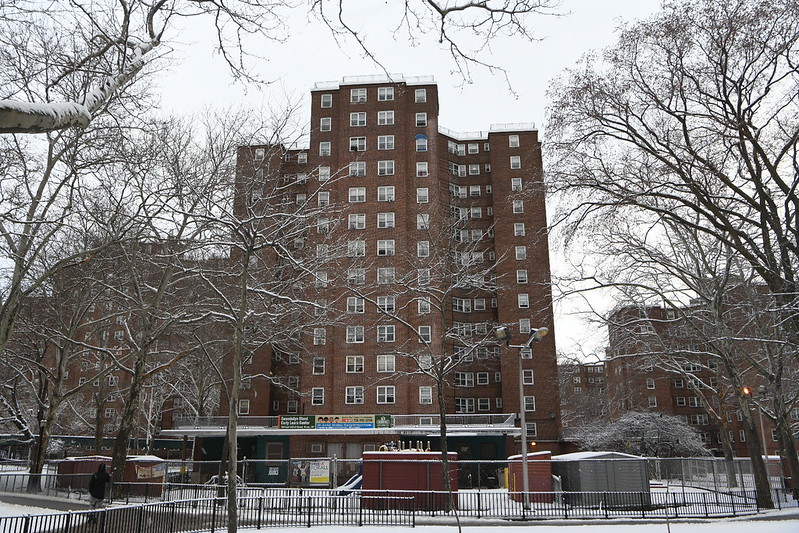 NYCHA left out in the cold again (photo: Governor's Office)

As the Democrat-led federal government moves toward passage of another massive spending package, billions of dollars in much-needed funding to repair crumbling public housing, particularly at the New York City Housing Authority (NYCHA), has again been left out.

The U.S. Senate on Sunday passed the Inflation Reduction Act, a major spending bill that will invest hundreds of billions in climate action and clean energy, cut health care costs and raise taxes, reducing the overall federal deficit. But the bill excluded investments in public housing that were previously included in President Joe Biden’s Build Back Better proposal, which the Inflation Reduction Act is considered by some to be a slimmed-down version of.

The Inflation Reduction Act passed the Senate on a party-line vote with every Democrat voting for and every Republican voting against it, and is expected to pass the Democrat-controlled House of Representatives this week as well. It is being hailed by many, especially climate activists, as a massive victory for the country and by many pundits as politically advantageous for Democrats ahead of this fall’s congressional elections and the 2024 presidential race. The package includes hundreds of billions of dollars in funding, all offset by other parts of the plan, largely going toward the transition from fossil fuels to greener, renewable energy.

The legislation came out of an agreement between Senate Majority Leader Chuck Schumer of New York and Senator Joe Manchin of West Virginia, with changes then insisted upon by Senator Krysten Sinema of Arizona. Manchin and Sinema were the main obstacles to getting more of the full Build Back Better agenda passed in the Senate, with concerns about overall spending, the national debt, and inflation.

Though the $1.75 trillion Build Back Better proposal passed the House of Representatives, it stalled in the Senate. If it had been successful, it would have been a boon for public housing entities like NYCHA, which have seen decades of federal disinvestment. It included as much as $170 billion for housing, including $65 billion for public housing across the nation.

In September of last year, Schumer made the case for a major federal investment in public housing. “There is a humanitarian crisis going on in public housing developments across New York City,” he wrote in an op-ed in City & State. “Due to decades of disinvestment, many of the New York City Housing Authority’s properties have fallen into such a state of disrepair that the only solution is through big, bold, and transformative action by the federal government.”

NYCHA has struggled for years due to a lack of funding and though its operational finances were brought into better standing by former Mayor Bill de Blasio’s administration, it still has a capital backlog of roughly $40 billion in required maintenance and repairs. Much of the city’s public housing is crumbling around its roughly half a million residents across the five boroughs, with rampant issues related to basic structural damage both exterior and interior, leaky roofs, mold, broken doors and elevators, faulty heating systems, and more.

U.S. Rep. Nydia Velázquez, a Brooklyn Democrat, also acknowledged NYCHA’s needs during her vote for the Build Back Better Act in November.

“[F]ederal disinvestment in public housing has forced many residents of public housing across the country to live in accelerating substandard living conditions. In my home city of New York, residents suffer from consistent lack of hot water, insufficient heat during the winter months, rodent and insect infestations, broken elevators, and widespread and recurring lead and mold problems,” she said. “This legislation includes the largest single one-time investment ever made to HUD’s Public Housing Capital Fund will go a long way to clearing the backlog of repairs around the country.”

Velázquez introduced a bill early in 2021, the Public Housing Emergency Response Act, that would allocate $70 billion in public housing funding across the country for physical repairs and upgrades via that capital fund, including $32 billion for NYCHA. But, it has not moved, nor has it been incorporated into any package able to pass both houses of Congress.

While city and state officials have been making some moves toward bringing in billions in capital repair revenue and getting repairs done at some public housing developments, the need far outstrips what has been done thus far, and few see a real solution without the federal government stepping in with at least tens of billions of dollars in direct funding.

In this year’s $101 billion New York City budget, Mayor Eric Adams dedicated about $5 billion in additional funding to affordable housing over ten years, for a total $22 billion housing program that includes dedicated capital funding for NYCHA -- roughly $1 billion per year. Adams had previously pledged to invest as much as a total of $4 billion annually in affordable housing, including $1.5 billion for NYCHA, but did not follow through.

Adams has repeatedly called on the federal government for greater assistance for NYCHA. In May, speaking at a news conference in favor of state legislation to create the NYCHA Preservation Trust that was later passed to help the authority raise more money for capital repairs, Adams said, “One thing that's clear, we need to stop playing with this. We're not getting money from the federal government this year. They're not. They already told us, ‘We are not concerned with NYCHA residents.’ They did not pass that $35 billion that we needed, so we must do it on our own. Here's a way to do it, the Trust. Let's get the Trust passed.”

An Adams spokesperson declined to comment for this article.

In June, the state Legislature passed that bill, creating the New York City Public Housing Preservation Trust that would then convert up to 25,000 NYCHA units, out of a total of 176,000, into federal Section 8 housing units eligible for federal housing vouchers worth hundreds of millions of dollars each year. Crucially, the trust will also be able to issue bonds to raise billions more for repairs and maintenance.

Elected officials and advocates expressed disappointment that Congress may yet again fail to provide desperately needed funds that could help the more than 535,000 New Yorkers, mostly low-income people of color, who call NYCHA home.

City Council Member Alexa Avilés, who chairs the Committee on Public Housing, praised Congress for addressing climate change in the IRA, but criticized the failure to fund housing. "Reconciliation offered a golden opportunity to fight for housing investments and public housing...But the need isn’t going anywhere," she said. "As far as I’m concerned, the US Senate – Joe Manchin and Kristen Sinema most of all – owe public housing residents the full $65 billion."

“It is beyond disappointing that Congress has left out public housing once again,” said Rachel Fee, executive director of the New York Housing Conference, in an email. “Even with the passage of the Preservation Trust, NYCHA can utilize federal resources to make immediate repairs that will improve living conditions for residents and make buildings greener.”

“There was little expectation that funding for NYCHA would be included in the Inflation Reduction Act,” said Jeffrey Maclin, a spokesperson for Community Service Society of New York, a nonprofit group. “However, if there was a silver lining to the failure of Build Back Better – which proposed investing billions to restore NYCHA’s infrastructure – it was recognition that we cannot solely rely on Washington to rescue NYCHA. That helped spur state creation of The NYCHA Preservation Trust, which represents a comprehensive strategy for preservation of our public housing in New York.”