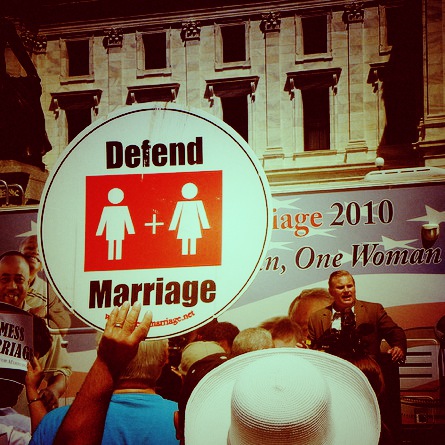 NEW YORK — The National Organization for Marriage, which is dedicated to limiting marriage to couples of the opposite sex and has enjoyed success in most states, is not giving up on New York, the biggest state to currently allow same-sex couples to marry.

The group is claiming the scalps of several legislators who voted for the bill in 2011 and lost primaries — and is pushing to knock off more in the November general election.

Most observers don’t see how same-sex marriage can be stopped in New York — 58 percent of registered voters supported it in a Siena poll in April 2011, including 45 percent of Republicans. But NOM hasn't given up. Far from it.

“If they passed it, they can reverse it," said Brian Brown, president of NOM, in an interview with Gotham Gazette. "Hopefully, [Senate Majority Leader] Dean Skelos will wake up and smell the coffee." Gov. Andrew Cuomo is also seen as an obstacle: "We’re going to need a better governor," Brown said.

But he conceded that the latter would "take some time" — more than the two years the group touted after the bill passed last year.

“We also hope the legislators will follow their own platitudes and give their constituents more say,” he said, arguing for the state Legislature to permit people to vote directly for constitutional prohibitions on same-sex marriage laws. Twenty-nine states have already done so, and 12 more ban it in law.

Meanwhile, NOM is putting its money where its agenda is. In the primaries alone, it spent well over $300,000 to defeat candidates who voted for same-sex marriage. Such a large expenditure for a group outside New York is unusual. The organization declined to respond to questions about how much it expected to spend for the general election.

Assemblyman Daniel O’Donnell, who shepherded the marriage equality bill through his house, said flatly, “The Assembly is not going to repeal." He emphasized that they "passed [the bill] five times" starting in 2007 before the Senate passed it last year. And Cuomo, who championed the new law and has seen his national prominence grow because of it, would surely veto any attempt to undo it.

But that doesn’t mean that some of those who voted for the bill have not paid a political price that may have repercussions for the movement to bring marriage equality to a vote in states such as Rhode Island, Maryland and Oregon, where activists on both sides are trying to sway legislators.

Of the four Republican Senators who voted for marriage equality:

Among Democrats who voted aye:

Campaigners for same-sex marriage are quick to point out that Huntley was under indictment (and pictured right before the elections in the city's tabloids wearing handcuffs); Rivera under an ethical cloud; and Alesi under fire for filing a personal injury lawsuit that many deemed frivolous.

But few would dispute that the marriage issue was high profile in the Grisanti, Saland, and McDonald races.

Mayor Mike Bloomberg, a late commer to the marriage equality cause (he came out for it in 2005 — the day he successfully appealed a court order to start issuing licenses to gay couples), donated heavily to the Republicans who voted for it and some of the Democrats (reserving his latest million-dollar donation to keeping Republicans in charge of the Senate). Cuomo offered his support to the four Republicans. Even Speaker Christine Quinn (D-Chelsea) said last year: “I don’t want to see them lose their seats.”

The Republicans also benefited from plutocrats such as Paul Singer, who has a gay son, and libertarian David Koch, who are fine with legislators voting for same-sex marriage as long as they are part of Republican majorities that do their bidding on their core agenda of deregulation and low taxes.

LGBT groups such as the Human Rights Campaign and the Empire State Pride Agenda also raised money for their newfound friends, but their ability to help win primaries for Republicans challenged from the right was complicated by the fact that none of the incumbents sought open endorsements from these groups and few of their members are active in the Republican Party in these districts.

Even the Log Cabin Republicans of New York State — an openly LGBT group — did not do formal endorsements of Saland and McDonald. They did endorse Grisanti and pro-marriage equality Republican Assemblywoman Janet Duprey, who won her primary.

HRC did not respond to a query about the level of troops they mobilized on behalf of marriage equality supporters in New York.

Lynn Faria, the acting director of the Pride Agenda, said, “We got involved in phone banking our supporters, donating staff time and direct financial support and helped the campaigns connect with our donors.”

She also said they had "more than 20 volunteers and a dozen seasoned Pride Agenda staffers on the ground" for the primary elections. They made an $11,000 donation to McDonald, $1,000 to Grisanti, and none directly to Saland, though “many of our supporters and board members did,” she said.

But compare that with NOM's efforts.

Brown said the organization "worked closely with folks disillusioned with Grisanti and McDonald and Saland."

"We will continue to do that. We spent a quarter million in the McDonald race. Some of it was issue ads. We highlighted his vote on same-sex marriage. On Saland we spent $50,000 to 100,000," he continued. "That race took people as a huge surprise. It was an uphill battle. Saland had been there for so long. No one expected Neil De Carlo to make it close, but he ran on it and made his position clear. We did automated calls. Email to our members. And that was the biggest issue in that race.”

The Pride Agenda did not run independent ads in these districts to help their Senate supporters, nor does it seem any LGBT group did.

Gregory T. Angelo, chairman of the Log Cabin, said that out of their 1,900 members in the state, they had “a couple of dozen on the ground” in these campaigns. They helped significantly with fundraising, but noted that while McDonald spent “an incredible amount of money” and lost, Saland’s close call may have had to do with the fact that “he had not had to fight in a primary in the past” and “did not do a lot of spending during the primary,” relying instead on “grassroots” and “a smart and aggressive absentee operation.”

Assemblyman O’Donnell said he was "disappointed and concerned about people who voted yes losing their seats."

"I am also concerned about groups that raised money on this issue not helping the people who got it passed,” especially Assembly Democrats who led the fight, he said.

Brian Ellner, a New York gay activist who worked with the Washington-based Human Rights Campaign in 2011 on the bill and helped raise big bucks especially for the four Republican Senators who voted for it, pointed out that "two of the three Republicans running who supported equality and fairness were re-elected."

"The one who lost was defeated by 100 votes on a record-low turnout. It demonstrates clearly you can do the right thing and survive," he said.

There is some question of how much McDonald even wanted to win. A poll conducted by Singer’s PAC showed McDonald with a 54 percent approval rating from all voters.

But when McDonald announced his support for the marriage equality bill in June 2011, he famously said, “You get to the point where you evolve in your life where everything isn't black and white, good and bad, and you try to do the right thing. You might not like that. You might be very cynical about that. Well, fuck it, I don't care what you think. I'm trying to do the right thing. I'm tired of Republican-Democrat politics. They can take the job and shove it. I come from a blue-collar background. I'm trying to do the right thing, and that's where I'm going with this.” That kind of refreshing candor is usually reserved to former politicians.

NOM’s Brown is also predicting that Grisanti "is gone." "He’s going to lose the general,” he said.

Asked if he realized that their support for Conservative Swanick might deliver the seat to pro-gay Democrat Amodeo and help with a Democratic majority in the Senate, Brown said he didn't "really care."

“These Republicans betrayed their constituents and their Republican Party principles," Brown continued. Indeed, the Republican National Convention once again adopted a platform calling for a federal constitutional amendment limiting marriage to man-woman couples throughout the United States.

While both NOM and the LGBT groups are spinning the results of the primaries as victories for their respective sides, Paul Schindler, editor of the Gay City News who has covered this issue from its inception, said, “NOM came nowhere close to doing what they said they’d do — make heads roll. But the notion that no one can lose their seat for this vote is just not borne out. McDonald clearly did. Saland came close. And Jim Alesi probably made the decision to get out over it.

“NOM wants to overstate it and our side wants to keep saying you won’t lose. My concern is that community leaders need to be willing to take a hard look at this. We buy into the idea that the polls are moving in our direction and it [marriage equality nationally] is inevitable. But we lose all the referenda on it. We’ll know a lot more about those concerns on November 7th” — when four more states hold referenda on same-sex marriage.

Ellner is working on a social media campaign called The Four to win marriage equality in Maine, Washington and Maryland and to fend off an anti-gay marriage amendment in Minnesota.

In each of those places, statewide organizations are working for and against the referenda. National groups such as NOM are working to win them for man-woman marriage and HRC and Freedom to Marry are aiding the efforts to open marriage to gay couples.

O’Donnell said he believes New York’s passage of marriage equality was “a tipping point” for the country. The adoption of the law here was said to have heavily influenced President Obama decision this year to come out for same-sex marriage — a position he had held as a candidate for state Senate in Illinois years ago but abandoned when he ran for statewide and national office.

Even as the political struggle over same-sex marriage continues as a driving theme in local elections, it is also still playing out on the national level.

Obama’s Justice Department was in federal appeals court in Manhattan on Sept. 27 with the American Civil Liberties Union arguing for federal recognition of the marriage of New Yorker Edie Windsor, 83, widow of Thea Spyer. It is one of several cases the US Supreme Court has before it finishes this term. The case will determine if legally married gay couples should get federal rights denied them by the 1996 Defense of Marriage Act, and whether the denial of marriage rights to Californians by Prop 8 in 2008 was constitutional.