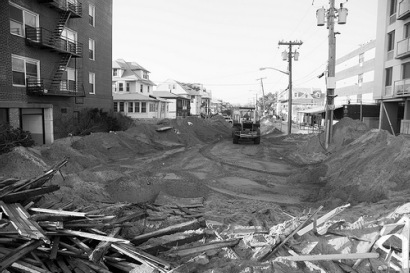 These are not commandments from an overbearing mother; these are party lines in a surprisingly competitive and lively nonpartisan special election being held tomorrow to fill a Queens City Council seat.

What makes the race even more odd for being so sought after is that whomever wins the race will have to jump back on the campaign trail soon after delivering a victory speech. The next citywide elections are just around the corner, with the primary set (at least for now) for September. The Queens seat was vacated when James Sanders Jr., successfully moved up to the state Senate after defeating indicted incumbent Shirley Huntley.

A Liberian, a Jamaican, two Haitians, a disgraced former councilman and an Orthodox Jew are among the eight candidates battling for the Council seat.

The winner of the special election in the 31st district will also be faced with representing some of the neighborhoods hardest-hit by Hurricane Sandy, including Far Rockaway, where thousands were left without power and train service was knocked out for weeks.

The district, tucked into Queens' far-flung southeast corner, ropes in the neighborhoods of Rosedale, Laurelton, Springfield Gardens and an eastern chunk of the Rockaway Peninsula.

Local leaders expect that demographics will weigh heavily in the decision of who gets elected.

Bishop Charles Norris, the founder of a large church in Jamaica, Queens, is a political power broker of sorts in the area and a former resident of Far Rockaway.

He has made it absolutely clear that the old New York anomaly of a white elected official representing a majority black area is unacceptable to him and others. He said he fears that the majority black district will be deprived of social and economic services at the expensive of a vocal, and more politically-active, minority. “I would hope that the other people in that race would see the light and do the math. If all of them stay in the race, none of them are going to win,” he said.

It was already a difficult year for the district when in late 2012 police say a driver drunkenly swerved off Brookville Boulevard, a single lane roadway near John F. Kennedy Airport, and plunged into marshland on Dec. 30, killing a pregnant woman who was a passenger in the vehicle.

That accident is what motivated Marie Adam-Ovide, the district manager of Queens Community Board 8 and a Haitian-born 41-year-old resident of Laurelton, to run for the seat. “How come no one ever thought there needed to be railing or protective barrier on that boulevard?” she asked. “A woman ended up dead. I realized then that Brookville Boulevard was something, among many things, that needed looking into.”

Adam-Ovide, a relative long-shot in the race who has spent most of the nearly $7,000 that she has raised in private funds, according to the website of the city's Campaign Finance Board.

There is a disparity, she explained, between neighborhoods like Jamaica Estates and Fresh Meadows and the minority areas of the district, which she said don’t receive the services and attention that they deserve. She lamented the trash lining large thoroughfare like Merrick Boulevard. In contrast, Community Board 8’s Union Turnpike last year received a thorough cleaning up from the DOE Fund, thanks to funding from the local councilman, James Gennaro.

The gregarious Sanders received mixed reviews from the candidates running to replace him. Adam-Ovide implied he neglected her community when he decided to run for State Senate, “concentrating instead on where he gets bigger bang for his buck.”

Saywalah Kesselly, the oldest candidate in the race at 52, was more direct, labeling Sanders “a dismal failure.” Kesselly, like Adam-Ovide, is not originally from the United States. Unlike Adam-Ovide, he hails from Liberia, and is running on a platform of bringing a “holistic” approach to local schools.

After Sandy, education may be the biggest stated priority among the candidates. P.S. 156 in Laurelton has been targeted for “truncation” by the Dept. of Education, meaning the DOE will be phasing out the middle school grades — six through eight — while keeping the others.

“I want to bring holistic learning centers here with extended days, weekend hours and after school programs that will help our young people,” said Kesselly who, with $12,330 raised, is near the bottom of the pack. “We have a high unemployment rate that needs to change. We need job training and business development. There are young people here who are drug dealers and if we redirect them, they will be the best businessmen and women in the country.”

Kesselly, a past member of various nonprofits, is the executive director of the African Center for Community Empowerment, a nonprofit founded in Far Rockaway to solve problems that have plagued the neighborhood like gun violence. Insisting, like many candidates do, that he is a “not a politician,” he said he would consider not running in the primary if he lost the special election.

Donovan Richards, Sanders’ most recent chief of staff, is unlikely to step aside for anyone. Only 29, Richards entered politics when a friend of his was murdered in South Jamaica, Queens. At an anti-gun violence rally a week after his friend’s funeral, he met Sanders and, soon after, Richards became his protégé. In 2008, Richards ran an uphill race against incumbent Assemblywoman Michele Titus and lost.

Richards is in a stronger position for the Council race, counting the backing of the Working Families Party, the United Federation of Teachers and 1199 SEIU, which independently spent several thousand dollars in support of his campaign, according to filings. He is also the top fundraiser in the pack with almost $60,000 from private contributions.

Diving into the Sandy relief efforts in Far Rockaway, Richards said he noticed a difference between the aid and attention granted to the eastern, minority-heavy section of the peninsula and the white western portion, like Breezy Point.

“I slept in shelters with my constituents and on the ground on rocks and I can tell you there was no presence of FEMA, the Red Cross or LIPA for the first fifteen days after the storm,” he said. “I saw how people were left to fend on their own. I take nothing away from what’s happened to people in Breezy Point, the whole peninsula was hit hard, but resources should have been more equitable.”

Richards argued he is the best person to replace Sanders because he knows how to navigate the City Council bureaucracy. Lacking a learning curve, he will be able to immediately, he said, work with government agencies and relief groups to ensure the Rockaways fully recovers.

If Richards, with his raft of high profile endorsements, is the favorite, his biggest threat may be the man who ran and lost against Sanders in 2009: Jacques Leandre.

The 42-year-old native of Haiti is a charismatic presence in the community, an attorney who founded the aforementioned youth football program in Rosedale. According to campaign finance records, as of Feb. 17, Leandre has been able to raise about $32,000 in private funds — a far cry from Richards’ total of nearly $60,000.

But Leandre has the experience of a campaign under his belt and the community name recognition to make him a top contender for the seat.

“I think the most pressing issues for the district are education and elderly services, or lack thereof,” Leandre said, explaining his platform. “We also need to rebuild the Rockaways. For me, the task is moving the community forward and bringing some innovative vision and ingenuity to the job. I want to expand on the work that’s been done not only by him [Sanders] but by predecessors as well.”

Leandre’s candidacy might have been given a boost last week when he appeared on many local television stations as the impassioned attorney defending a 19-year-old black man who had been beaten by police in Flushing, Queens on Jan. 8. Police charged the man, Robert Jackson, with marijuana possession and resisting an arrest, among other charges, but civil rights leaders have alleged the police used unnecessary and brutal force.

Leandre also garnered headlines for challenging the petitions of six candidates in the race. All of the challenges failed and candidates who were sued banded together to blast Leandre.

Selvena Brooks, a public relations specialist, was among the candidates who came together against Leandre, accusing him of “a cynical, anti-democratic exercise, and a waste of the court’s time and taxpayers’ money.”

Brooks, the former spokeswoman for Senate Democrats, is running on the Rebuild Now! party line. Brooks has called for a rebuilding of education that would restore cuts to vocation and technical training programs, investment in new infrastructure projects and a coordinated relief effort for Sandy-ravaged areas, including opposition to property tax hikes on afflicted homeowners.

“We would have liked to have seen more done in the community for recovery efforts,” the 29-year-old Brooks said. “We’ve been here in trenches working with local clergy and ensuring people in the Rockaways get the help that they need. There are many are still hurting. People are living in hotels across the city; it’s unacceptable to live in your own city and not get the services you need.”

Pesach Osina, who did not respond to repeated requests for comment, is a former staffer of energetic Rockaways Assemblyman Phil Goldfeder who also happens to be Orthodox Jewish.

A native of Brooklyn, Osina has lived in Far Rockaway since 1999, according to his campaign biography. The neighborhood is home to a growing Orthodox Jewish enclave that is a revival of communities that had dwindled in the 1970s not far from the black and Hispanic sections of Far Rockaway.

Allies of Osina contend that his candidacy is desperately needed because funding for community programs and social services has been virtually denied to their institutions. Writing in 5 Towns Jewish Times newspaper, Osina’s campaign treasurer, Eli Shapiro, argued that their community programs received less than one percent of the money allocated to the district over the past five years.

Michael Duncan, a native of Jamaica (the country), served as Sanders’ chief of staff in the 2000’s but angered Sanders when he decided to challenge him in 2009. Duncan, like Leandre, was expecting Sanders to be term-limited, but a controversial and overwhelming vote by the City Council allowed elected officials to seek third terms.

A veteran of PTA boards and Rosedale resident, the 49-year-old Duncan said he led the successful fight against the arrival of a so-called “hot sheets” motel in Springfield Gardens. Residents feared it would attract prostitution and other illicit activity and now the property is being turned into a strip mall.

“I’ve had four more years to build more bridges and more relationships in the district,” Duncan said of his 2009 loss. “Based on my service to the people in this community, I’m the person to represent this district.”

The only former elected official in the race did not respond to requests for comment. Allan Jennings represented a Jamaica and Ozone Park-based district last decade and was a notorious presence in the City Council, having been censured for sexually harassing staffers. He has run for numerous offices sense. Jennings’ campaign committee is not registered in the district. He has raised a grand total of $25 for the race.