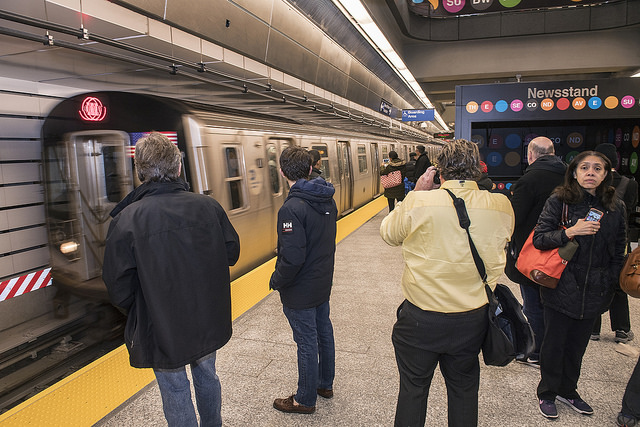 Two years ago, Mayor Bill de Blasio released a comprehensive plan for the city that included funding to study the expansion of a subway line on Utica Avenue, Brooklyn, one of the most crowded transit corridors in the city. The plan roused speculation among transit advocates and elected officials that funding for the much-needed subway line might eventually be in the pipeline, but with little movement on the study, some are beginning to doubt whether officials are truly committed to the project.

The Utica Avenue subway line would extend the 3 and 4 train from Eastern Parkway southward down Utica Avenue, a stretch of Brooklyn that includes East Flatbush, Flatlands, and Marine Park, and is home to about 168,000 residents. The extension has been a topic of discussion for more than a century, first proposed in 1910 when residents of Brooklyn cited “business and residential needs” as a key factor motivating their desire for a dedicated subway line. In 2015, Mayor de Blasio’s One NYC plan designated $5 million towards studying the feasibility of the subway line, a result of the capital funding agreement between the city and state.

But elected officials and residents have heard little about the planned study -- which was scheduled to be conducted in the current fiscal year ending June 30 -- and are beginning to voice their complaints about a lack of communication from the state-run Metropolitan Transportation Authority and the New York City Department of Transportation.

“I definitely wasn't consulted, I do know about the study, but I wasn't told about it.” said Council Member Jumaane Williams, who represents the East Flatbush district where the line would be built. Williams said he had to contact the DOT directly after he learned about the study in 2015, and ask for an update himself. “My hope is that maybe with this new study, they're trying to get us more involved...but the reality is I don't think many of us are aware,” he said.

A spokesperson for the DOT said in an email, “The DOT and MTA launched the study process last year.” The spokesperson did not respond to multiple emails requesting details on the timeline, but stressed, “An extension along Utica would bring great opportunities to more communities and was a priority of the City during MTA capital plan negotiations.”

MTA spokesperson Kevin Ortiz said that the agency was coordinating with the DOT, but that much of the onus fell on the city. As Ortiz explained it, the study had yet to begin. In an email, he said, “This is a city allocated project, so we need a better idea of what the city wants out of the study. So we are working with them to refine the scope to meet their needs and envision hiring a consultant to conduct the study later this year.” In a followup email, he referred questions to the DOT.

State Assemblymember N. Nick Perry, whose district includes Williams’ constituency, said he has been given scant information on the proposed study. “I know there’s been a little noise about this, but I haven't heard anything more,” Perry said. “So far it's still something in the pipeline and it may be quite a long pipeline.”

The Crown Heights-Utica Avenue subway station, from which the potential Utica line would extend, has almost 9 million riders a year, making it the 37th most popular station out of 472. The extension would run down Utica Avenue to Kings Plaza, cutting across a district that has few trains in the area. “People complained about having to walk a couple of blocks on Second Avenue,” Council Member Williams said. “There are no trains in many parts of my district within many blocks.”

Recognizing the dire transit needs on Utica Avenue, the DOT last year launched the B46 Select Bus Service, which runs along the Utica corridor and carries 44,000 people every day. The route was identified as a priority in 2009, and realized in 2016 after several meetings with Brooklyn community boards. The route extends six miles from DeKalb Avenue to Kings Plaza, covering a similar region to the prospective Utica Avenue subway.

But the buses, according to Council Member Williams and Assemblymember Perry, present their own problems. People in vehicles get penalized for violating the restricted bus lanes, which are closed to cars and trucks from 7am to 4pm. “It's obviously not good for working people's pockets to get $115 tickets, so I'm trying to figure out how they're measuring the success of the bus lanes,” Williams said.

Perry believes the ticketing may be taking a toll on commerce in the district as well; truck drivers attempting to make deliveries along the street get fined too. “Right now they get tickets...and some of them can't afford the cost of doing business,” Perry said. “Folks are looking to move off Utica Avenue, and that's an economic hub of this community.”

Even with the implementation of the B46, Perry pointed out a similar issue with the DOT, a lack of communication with the affected commuters and residents. “It seems to me that they snuck it through really, because they spoke to a select group of people and by the time the information got down to the folks who were really going to be impacted they were already in their implementation mode,” Perry said.

De Blasio’s decision to devote $5 million to the plan in 2015 may have mollified politicians and residents at the time, but some transportation insiders have a different take on the matter. Jon Orcutt, the director of communications and advocacy at TransitCenter, and the director of policy for the DOT from 2007 to 2014, said that the Utica Extension study was one of a number of studies that get funding, but rarely make it beyond the desk of the MTA.

“If you go back through MTA capital programs, there are lots and lots of studies like this...in some ways the MTA sort of buys peace with elected officials by studying things that they say they want to look at,” Orcutt said. “They may be studying them for even longer than they need to be studied.”

To go from talk to action, said Mitchell Moss, director of the NYU Rudin Center for Transportation Policy and Management, there needs to be a concerted effort by the community, the city and the state. “The important thing is to have advocacy from all levels,” he said.

Moss pointed out that the state’s priorities have been elsewhere on larger projects. For the last few years, the MTA had been scrambling to complete construction on the Second Avenue subway line, which was a priority for Governor Andrew Cuomo. After perennial delays, which drew constant complaints from residents of the East Side who bemoaned the lack of mass transit facilities, the line finally opened on deadline to the public on January 1.

Political will for the Utica line, in comparison, has been relatively muted. Council Member Williams said he was “not sure why this has stalled.” He continued, “I think many times there are parts of this city that are not paid attention to as much as others, and I think we've fallen into that bucket for quite some time. Obviously it's time to change that.”

TransitCenter’s Orcutt thinks the mayor hasn’t prioritized or advocated for the Utica Extension, which he believes is necessary to push it forward. “Bloomberg got the 7 Extension... but they went and made a case with the Governor and went all in for it and it happened,” he said. “I don't think there's anywhere near that kind of push or pressure to get the Utica project going.”