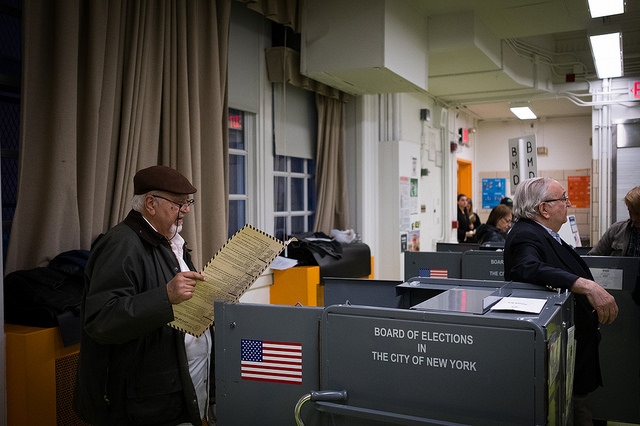 A recent report by New York City’s Board of Elections details shockingly low voter turnout in the 2016 congressional and state primary elections. The new numbers come amid increased attention to New York’s suppressive voting laws but little action from state lawmakers who could implement reforms like early voting, same-day registration, automatic voter registration, or even consolidation of primaries.

Because it was a presidential year, New Yorkers voted in three primaries -- presidential (April), congressional (June) and state (September) -- and the November general election.

The BOE report shows middling turnout for the presidential primaries, despite -- or because of -- New York’s strict party registration rules, and somewhat strong turnout for the November general election. The two other primaries show abysmal numbers, however.

The November 8 general election, wherein Hillary Clinton and Donald Trump topped the ballot, there was a 62% turnout rate among active eligible voters. Active voters are a smaller pool than eligible voters, which includes unregistered voters, and slightly smaller than if inactive registered voters would be included. The city turnout was slighter higher than the national turnout of 59.7%.

Primary elections were a different story entirely: for the presidential primary in April 2016, the city saw a 35% turnout; for the June federal primary, 8%; and for the September state and local primary, 10% turnout.

The report, simply titled “Annual Report 2016,” was released on the BOE’s website, although it does not indicate a date of publish and multiple representatives at the BOE could not provide a specific date of its publication. Along with information about the board’s president, Maria Guastella, and its borough commissioners, the report also includes data beyond just 2016 voter turnout.

The city Board of Elections has been the focus of criticism for many years, especially of late, for mismanagement or even malice; after a mistaken voter roll purge led to thousands of active voters being removed from the rolls, many votes in the presidential primary were declared invalid, in a situation Attorney General Eric Schneiderman referred to in harsh terms. “Democracy itself is under attack,” he said upon joining a lawsuit over the purge.

The BOE report on 2016 details actions undertaken by the board to increase turnout and streamline the election process, such as a public education campaign on city elections conducted in five different languages (English, Spanish, Chinese, Korean, and Bengali are listed), along with voter registration drives at community events and pre-registration information sessions with high school students. There were 4,477,091 active registered voters in the city as of November 1, 2016, with Democrats (3,343,041) outnumbering Republicans (501,976) by almost seven to one.

There were also 909,611 registered voters unaffiliated with any party; 123,677 voters registered with the Independence Party; 20,956 with the Conservative Party; and 16,651 with the Working Families Party; along with several thousand more registered with smaller parties.

In each election held in 2016, turnout was higher in Manhattan than in the other boroughs. In the June federal primary, Manhattan saw 14% turnout; Brooklyn and the Bronx each saw 5% turnout and Queens saw 4%. Staten Island didn’t have a federal primary in 2016, owing to the fact that neither incumbent Rep. Dan Donovan nor his Democratic challenger faced a primary challenge. Manhattan’s higher turnout for the congressional primary is at least somewhat due to the fact that there was an open seat race: Charles Rangel, the longtime Harlem congressional representative, retired, leading to a crowded, open race for the seat. Over half of primary votes in Manhattan in 2016 were cast in Rangel’s 13th district, now represented by fellow Democrat Adriano Espaillat.

Low voter turnout is nothing new for New York City, or New York State, of course. New York’s legislative districts are severely gerrymandered to the point that most legislative races in the state are noncompetitive. A report from the Prison Gerrymandering Project shows that in the Republican-controlled New York State Senate, districts in the city, which are mostly represented by Democrats, are overpopulated and therefore dilute the city’s voice in the Senate, whereas upstate districts more likely to be represented by Republicans are underpopulated and thus have an amplified voice relative to population size. The same is true of the Assembly, except in favor of city Democrats rather than upstate Republicans.

Beyond gerrymandering, New York has regressive voting laws. The state does not allow no-excuse early voting, an electoral feature in 38 states, including many with notorious voting laws such as Florida, North Carolina, and Texas. It also doesn’t allow no-excuse absentee voting.

The Assembly, in this past legislative session, passed a voting reform package including early voting, automatic voter registration, and electronic poll books, which was endorsed by Mayor Bill de Blasio, who held two telephone town halls on electoral reform, but the package stalled in the Senate, with no action being taken in the body before the legislative session ended last week. Governor Andrew Cuomo, who outlined an electoral reform package in January, did nothing publicly to push the cause thereafter.

Although voter apathy, or simply a lack of awareness, could’ve contributed to the extremely low turnout, the city’s primary elections have been criticized as suppressive as well. The state had three separate primary elections in 2016 rather than consolidate the federal and state primaries favored by voting rights advocates. State legislators have debated this issue, with the Assembly voting to consolidate primaries in June while the Senate has pushed an August date.

New York also has a long six-month window between the required date to register with a party and the party’s actual primary, though this is only the case for those already registered who seek to enroll in a party or change party identification (newly enrolled voters can register within a few weeks of voting). In the presidential primary, wherein two unconventional outsider candidates, Donald Trump and Bernie Sanders, drove large numbers of people to the polls who hadn’t voted before, some of whom were registered by not with a major political party, many hopeful voters learned that they couldn’t actually vote because they didn’t declare a party affiliation six months in advance. So-called independents, or “unaffiliated” registered voters, are blocked from voting in party primaries.

Francis Barry, the Director of Public Affairs and a former speechwriter for Mayor Michael Bloomberg, wrote in Bloomberg that New York “is the worst state for independents, bar none.”

Voting rights and government reform advocates and many legislators have called for an overhaul of the state’s election law. Most agree that the state should institute early voting, same-day registration, consolidated primaries, automatic registration, and other reforms. Some argue for open primaries where any registered voter could vote in a primary election of their choosing.