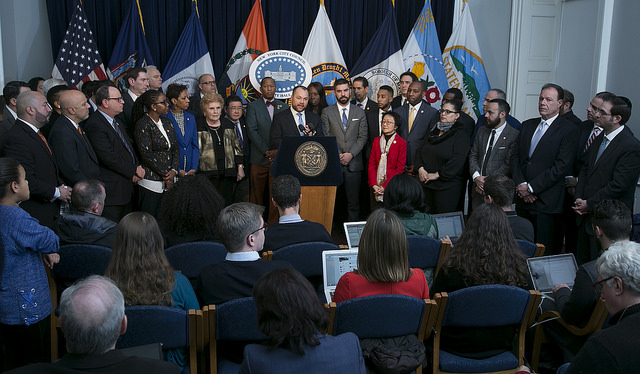 The new class of the New York City Council took greater shape on Thursday with the appointment of chairs and members to the 40-plus committees and subcommittees that oversee the broad legislative, land use, and oversight roles of the 51-member body. Most returning Council members were reassigned to lead different committees while some remained in the positions they’ve served the past four years. New Speaker Corey Johnson also chose to create a few new committees to boost staff levels in certain areas and to better address specific issues that were subsumed under broader committee purviews.

In their new roles, many of the committee chairs will have to navigate a slate of issues, which in many cases will likely lead them into direct confrontation with Mayor Bill de Blasio’s administration. This holds particularly true for the powerful land use and finance committees, both of which have new Council members at the helm. Speaker Johnson has also pledged broader independence from the mayor than his predecessor, indicating that members will be allowed, and even encouraged, to take the administration to task. He has pledged an enhanced oversight and investigations committee to lead the way in that regard.

Council Member Rafael Salamanca Jr. of the Bronx was appointed chair of the land use committee, which is tasked with overseeing and reviewing land use applications, zoning amendment,s and landmark preservation in the city. Since the committee has the final say on any development projects that require city government approval, it plays a prominent role in determining the success of the mayor’s affordable housing program, in particular thus far by approving comprehensive, and controversial, neighborhood rezonings in communities such as East New York and East Harlem.

The city is exploring similar rezonings -- to create more affordable housing while also injecting economic energy and other benefits into neighborhoods -- in the Bay Street corridor on Staten Island, Jerome Avenue in the Bronx, and Flushing, Queens, among other communities. “Our city is at a crossroads, including my community in the South Bronx,” Salamanca said in a statement Thursday. The City Council, he said, “should be on the front lines on shaping the planning, development and all other land use actions in a way that listens to and addresses the concerns of all New Yorkers.” Freshman Council Member Francisco Moya is heading up the subcommittee on zoning and franchises which falls under Salamanca’s purview.

The finance committee, led by its new chair Council Member Daniel Dromm of Queens, also has a tough task ahead as it heads into budget season. Dromm will lead the Council’s negotiations with the administration over the $86 billion-plus city budget. The mayor is expected to release his fiscal year 2019 preliminary budget proposal later this month and the administration has been bracing for cuts in federal funding, threatened by the Trump administration, and a widely expected economic slowdown after years of continuous growth.

Last year, the Council advocated for increased savings and reduced agency inefficiencies even as they called for new funding for Council priorities. “I intend to use this position to move a progressive budget forward working closely with Speaker Corey Johnson who I thank for giving me this opportunity to serve,” Dromm said in a statement.

The Council’s budget hearings will no doubt also touch on the city’s $96 billion capital budget. Numerous Council members called last year for increased transparency in how capital projects are funded and managed, insisting that the city needs to reduce financial waste and cut down on project delays.
Johnson has now gone so far as to create an entirely new subcommittee to oversee the capital budget, chaired by Council Member Vanessa Gibson. “Many members, including myself, have been frustrated by the capital process itself,” Gibson told Gotham Gazette outside the Council chambers on Thursday. She said the new committee will allow expanded oversight of capital spending, particularly by individual city agencies. “At the end of the day, we just wanna say to the public, to New Yorkers and to all of my colleagues that we are spending your money wisely,” she said.

The transportation committee continues to be led by Council Member Ydanis Rodriguez, who has been a vocal supporter of the Move New York congestion pricing plan, which would impose tolls on the East River bridges to raise funds for mass transit infrastructure and reduced fare MetroCards for low-income New Yorkers, while also lowering tolls on other bridges.

De Blasio has opposed both congestion pricing and the “Fair Fares” campaign, insisting that fair fares should be funded by the state and that congestion pricing is a “regressive tax” that hurts outer borough commuters. He has instead proposed a so-called millionaires tax, which Rodriguez also supports, that would accomplish both goals - subsidized MetroCards and new transit revenue. However, like congestion pricing, the tax would have to be approved by the state Legislature where it has already been rejected by Governor Cuomo and the state Senate, portending perhaps that the fair fares fight will be fought locally yet again. Cuomo appears on the verge of pursuing some version of congestion pricing.

In keeping with Johnson’s promise to stand up to the de Blasio administration, the Council now has an expanded Oversight and Investigations committee, led by Council Member Ritchie Torres of the Bronx. The committee is expected to have a full-time investigation staff made up of professional investigators, former prosecutors, and journalists. In an interview with the New York Times, Torres indicated a number of different issue areas he would approach for added oversight. “The abuse of placards. The use of eminent domain. The disposition of public land. Deed restriction. The disbursement of city subsidies. All of it is on the table,” he said.

On Thursday, Torres told Gotham Gazette that the New York City Housing Authority’s lead contamination issue, which has been a black eye for the de Blasio administration, was a “continuing concern” for him. “I have not set the investigative priorities of the committee just yet, but given my former position as chairman of the public housing committee, given my interest in the subject, NYCHA is going to be figuring prominently in my oversight priorities,” he said.

Torres’ role will crossover with the work of other committees, such as the Committee on Public Housing, which he led last term and will this term be led by Brooklyn Council Member Alicka Ampry-Samuel. The public housing authority needs $25 billion for infrastructure improvements, with few forthcoming state and federal funds this year. The authority’s numerous public failures continue to haunt the administration and invite criticism from the Council and community activists. And although the city has put a NYCHA overhaul plan into motion and seen some successes and promising developments, problems are not likely to abate any time soon.

“As chair, I will ensure that critical issues are addressed, from heat, to lead, to security issues,” Ampry-Samuel said in a statement. “I look forward to visiting every housing development in the city and the opportunity to hear from the residents and the resident leaders.”

Johnson also chose to expand the role the Council plays in scrutinizing the city’s criminal justice system. Council Member Rory Lancman of Queens was chosen to lead the newly formed Committee on the Justice System, which has oversight of city courts, district attorneys, legal service providers and the Mayor’s Office of Criminal Justice.

Manhattan Council Member Keith Powers will be heading the Committee on Criminal Justice, which has oversight of the Department of Correction and Department of Probation. Both committees will play a prominent part in the plan to close the Rikers Island jail complex, which is contingent on reducing the city’s jail population to less than 5,000 -- it is currently just under 9,000 detainees -- while also creating borough-based jail facilities. Lancman told Gotham Gazette he expects to “aggressively oversee and try to reform” the city’s justice system. “You’ll see a very robust agenda coming out of my committee,” he said.

Lancman and Powers’ committees were carved out of the earlier Committee on Fire and Criminal Justice Services and the Committee on Courts and Legal Services, which Lancman led last term. Powers, who is new to the Council like Ampry-Samuel and others, said that move “recognizes that Rikers Island and the corrections system is really its own issue that needs to be tackled in the next coming years.”

“There are a lot of thorny issues,” Powers said of the closure of Rikers, “and I think a big part of it is really making sure that we put on the right timeline and that we make sure we manage all the different constituencies that are involved here.”

New York City Health + Hospitals, the cash-strapped municipal hospital system, continues to be a big area of concern for the Council and in particular Johnson, who led the health committee for the last four years. Johnson created a separate Committee on Hospitals to oversee the system, appointing new Manhattan Council Member Carlina Rivera as chair.

Council Member Mark Levine, chosen to be the new health committee chair, noted a number of issues he will address, including the opioid crisis, racial disparities in health outcomes, animal rights and the threat of bioterrorism. He has promised to push for a single payer healthcare system in the city -- a priority for the speaker -- and told Gotham Gazette he expects “there will be times when the Council and the administration are on different sides of an issue,” and that its incumbent on members to advocate for the Council’s priorities. “That’s the job of a good committee chair,” he said.