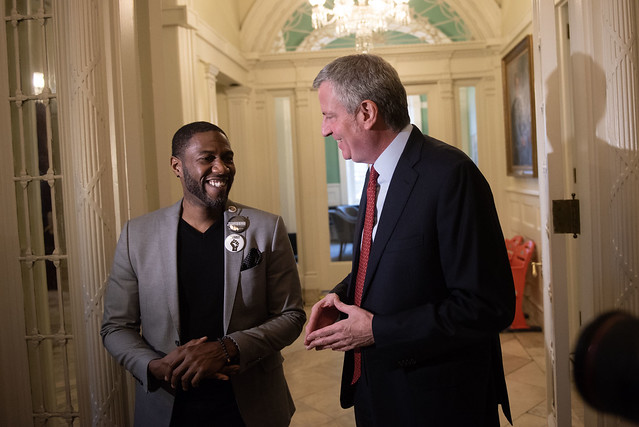 Fulfilling a promise he made in his successful campaign for public advocate, Jumaane Williams introduced legislation on Wednesday that would require the city to conduct an assessment of expected racial and ethnic impact brought on by proposed neighborhood rezonings, in order to ensure that the city is complying with the federal Fair Housing Act, and combat segregation and displacement.

The Fair housing Act, passed in 1968, is meant to protect against discrimination in the sale, purchase, and renting of housing, or in trying to obtain housing assistance, and it also requires jurisdictions receiving federal assistance to take affirmative steps to integrate housing. New York City, Williams said at a news conference Wednesday morning, has failed on that front.

The public advocate was joined by Bronx City Council Member Rafael Salamanca, who chairs the powerful land use committee and has co-sponsored the bill, and members of Churches United For Fair Housing (CUFFH), a grassroots advocacy group that has called for such ‘racial impact studies’ to help inform neighborhood rezonings, which typically occur to change land use rules to allow greater housing density and usher in new city investments in a given community. City Council Member Antonio Reynoso, who represents areas of Brooklyn that have seen significant gentrification and is negotiating a possible Bushwick neighborhood rezoning with the city, also expressed support for the legislation.

“Rezonings are one of the primary drivers of gentrification, which leads to displacement, which leads to racial segregation,” Williams said, harshly critiquing Mayor Bill de Blasio’s affordable housing plan, which has relied on upzoning neighborhoods to create more density with a legal requirement -- Mandatory Inclusionary Housing -- for developers to build affordable housing.

Most of the rezonings pursued by the administration have been in low-income communities of color and advocates say that has exacerbated gentrification while also refusing to ask more affluent and white communities to allow more housing in their neighborhoods. Williams, who voted against MIH when he was in the City Council, has called for a moratorium on all neighborhood rezonings.

Williams’ bill would mandate that any land use application that goes through the Uniform Land Use Review Procedure (ULURP), which requires an environmental impact statement and is reviewed by the City Planning Commission, must also include a racial impact study. The ULURP process occurs for many proposed new developments, from neighborhood rezonings that impact broader communities and are typically spearheaded by the mayoral administration to single plot rezonings that allow developers to build a bigger building than the current zoning allows.

“[E]ven the announcement of ULURP leads to rampant speculation that coincides with a rise in harassment and displacement,” Williams said. “The link between [neighborhood] rezonings and racial segregation is very clear. I don’t think anyone can argue with the results of it. Yet the city has failed to even acknowledge the problem.”

As an example, Williams pointed to the 2005 rezoning of the Williamsburg waterfront, approved under then Mayor Michael Bloomberg, which “transformed low-income communities of more color into enclaves for new wealthy and white residents,” Williams said. “A decade later, the waterfront area’s white population increased by 45% compared to 2% decline citywide, while the area’s Latinx population declined by 27% compared to a 10% increase citywide. This is just unacceptable. To combat racial segregation, we first need to study it.”

Williams also noted that Seattle has implemented a similar policy that takes racial justice into account while creating affordable housing. “Even Seattle doesn’t have the phrasing ‘A Tale of Two Cities’ and they are doing much more to address the tale of two cities, I believe than the housing plan here in New York City,” he said, invoking the campaign slogan that de Blasio employed in his first mayoral race in 2013.

At an unrelated afternoon news conference, City Council Speaker Corey Johnson did not take a position on the bill, saying he had yet to study it. But he acknowledged the rationale behind it. “I do think what it speaks to is the gentrification and displacement that we’ve seen throughout our entire city, all five boroughs, that anxiety, that fear, especially amongst long term residents about what’s happening to them,” he said.

De Blasio has insisted that his housing and planning policies are sound and use a combination of strategies to create new housing, including many affordable units, while also putting resources in communities with new parks, school seats, and other investments that often accompany rezonings. He has said that the neighborhood rezonings under his administration have been done in concert with local Council members who welcome new zoning rules, more affordable housing, and city investment. The mayor has also pointed to the city’s significant increase in tenant eviction protection during his tenure.

"This Administration is fighting displacement with record levels of affordable housing, free legal services, rent freezes, and programs to combat harassment," said Jane Meyer, a mayoral spokesperson, in a statement. "Through Where We Live NYC, we are developing new fair housing policies to fight discrimination and build more inclusive neighborhoods. We look forward to reviewing this legislation and working with our partners to promote equity and fairness."

Salamanca has his own concerns with the mayor’s housing plan as he has pushed for a 15% set aside in new affordable housing for homeless New Yorkers, which the administration has resisted. “We can continue to grow the city of New York, because there is a housing crisis,” he said at the morning news conference with Williams, “but we should be able to do that without displacing our communities, and that’s what this is about.”

He also refuted the notion that a racial impact study could add another layer of red tape to the already lengthy and burdensome ULURP process. “We’re not trying to change the timeframe as to how the ULURP process works,” he said in response to reporters’ questions, “but...what we’re adding is more resources, more information, to that [environmental impact study] so that Councilmembers can make the right decision.”

CUFFH was created ten years ago when advocates sought to fight the proposed rezoning of Broadway Triangle in Brooklyn. The group was part of a larger coalition that took the Bloomberg administration to court, arguing that the rezoning would violate the Fair Housing Act. The case was only settled in 2017 with the de Blasio administration.

But Alex Fennell, network director of CUFFH, said the city continues to fail to live up to its obligations under the FHA. “Being displaced is not a choice. And the current zoning process, rather than promoting fair housing encourages developers to profit from harassing, displacing and segregating out long time residents,” she said on Wednesday.

She added, “The racial impact study is the first step in undoing the harm caused by over a century of land use policy rooted first in overt racism, then shielded by colorblind language.”

The next step for the bill would be a committee hearing.

Note - This article has been updated with comment from a mayoral spokesperson.