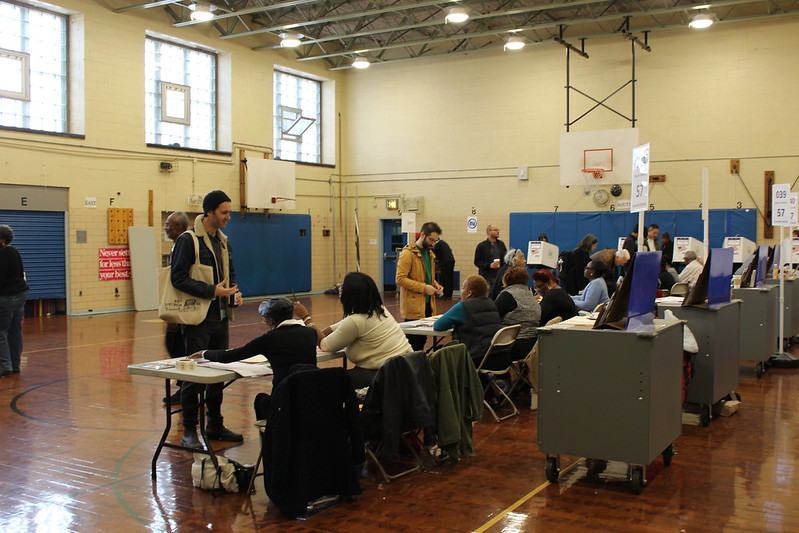 After about 60,000 New York City voters took advantage of the first early voting period in city history, albeit during an especially quiet electoral year, more than 650,000 others went to the polls on Election Day 2019, providing mostly expected results and approving multiple controversial ballot proposals to change city elections and governance. This year provided a helpful initial test run for early voting and all that goes with it, such as electronic poll books and a lot of poll-worker training, before what is expected to be an incredibly tense and busy 2020 election year, with especially high turnout for the presidential election, as well as those for Congress and the State Legislature.

After winning a special election earlier this year, Public Advocate Jumaane Williams, a Democrat, was reelected Tuesday to serve the rest of the term through the end of 2021. Queens Borough President Melinda Katz, also a Democrat, was elected Tuesday to become the next Queens District Attorney, a four-year term beginning at the start of 2020. Council Member Farah Louis, who replaced Williams in the City Council after winning her own prior special election, also retained her seat and can serve through at least 2021.

And the relatively small number of New York City voters who turned out this fall (about 15% of the city's 4.8 million active registered voters) -- from the inaugural early voting period and on Election Day -- also approved 19 specific changes to city elections and governance with overall “yes” votes on five ballot proposals. Those changes include instituting ranked-choice voting for party primary and special elections; bolstering the agency that investigates and prosecutes certain allegations of police officer misconduct; and making several tweaks to ethics, budgeting, and land use laws.

Adding to the intrigue was the 2019 Charter Revision Commission, which put the 19 proposals in five questions on the ballot. With all the questions approved by voters, the following changes are among those that will be instituted (some of the language is directly from the charter commission’s materials):

-Ranked-choice voting for party primary and special elections for the offices of Mayor, Public Advocate, Comptroller, Borough President, and City Council Member. This will begin on or after January 1, 2021.

-The time to hold a special election after a city office is left vacant is extended to 80 days.

-Alters the structure of the Civilian Complaint Review Board (CCRB) by adding two members, one from the Public Advocate and a joint appointment by the Mayor and the City Council, who would also serve as chair.

-Provides that the Council directly appoints its members to the CCRB.

-Requires the Police Commissioner provides a detailed explanation to the CCRB when deciding to impose discipline on an officer that differs from the level of discipline recommended by either the CCRB or the NYPD Deputy Commissioner of Trials.

-Allows the CCRB Board to delegate its subpoena power to its Executive Director.

-Allows the CCRB to investigate potentially false official statements made by an officer it is investigating and to recommend discipline, if appropriate.

-Provides a minimum budget to the CCRB sufficient to fund CCRB staff equal to 0.65% of the number of uniformed police officers, unless the Mayor determines that fiscal necessity requires a lower budget.

-Extends the post-employment appearance ban for elected officials and certain senior appointed officials from one year to two years for employees/officials who leave city service on or after January 1, 2022.

-Limits the political activity of COIB Board members by prohibiting participation in campaigns for local elected offices, and reducing the maximum amount of money that they can contribute to the amounts that candidates can receive from those doing business with the city ($400 or less, depending on the office).

-Requires that the Citywide M/WBE Director report directly to the Mayor and be supported by a mayoral office of M/WBEs.

-Requires advice and consent by the City Council for the Mayor’s appointment of the Corporation Counsel.

-Allows the city to use a “rainy day fund” to save money for use in future years, such as for addressing unexpected financial hardships. (Changes to state law will also be needed for this rainy day fund to be usable.)

-Sets guaranteed minimum budgets for the Public Advocate and Borough Presidents at or above their respective Fiscal Year 2020 budgets, adjusted in future fiscal years by the lower of inflation or the percentage change in the city’s total expense budget (excluding certain components), unless the Mayor determines that fiscal necessity requires a lower budget.

-Requires the Mayor to submit the revenue estimate to the City Council by April 26 (instead of June 5).

-Requires the Mayor to submit budget modifications to the Council within 30 days after the submission of any periodic update the city’s financial plan during the year.

-Provides a ULURP Pre-Certification Notice Period by requiring the Department of City Planning to transmit a detailed project summary of ULURP applications to the affected Community Board, Borough President, and Borough Board at least 30 days before the application is certified for public review, and to post that summary on its website.