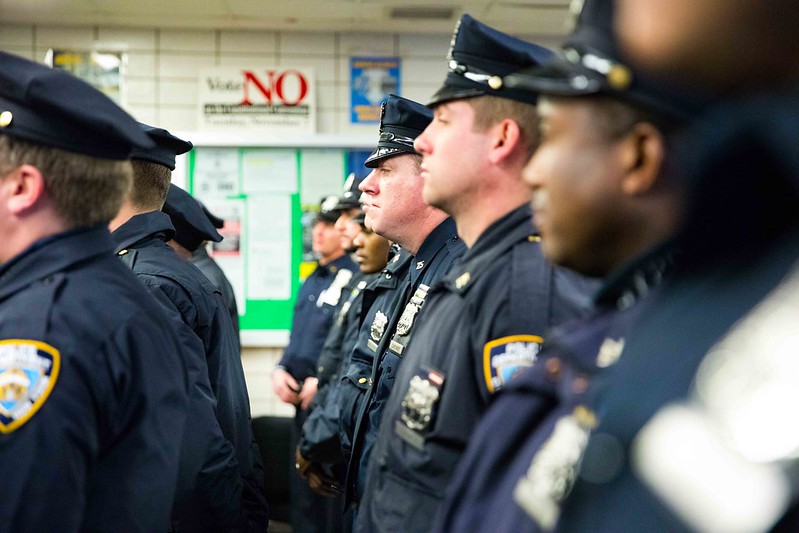 More than two dozen New York political clubs and civic organizations have come together to announce new demands on elected officials and candidates for office, attempting to sway the accelerating police reform conversation reignited by the killing of George Floyd.

The clubs will refuse to endorse candidates who accept donations from police unions or do not support major budget cuts to New York’s City and State police forces, among other planks, according to a letter being made public by the groups and shared with Gotham Gazette.

Protests have erupted across New York City and the country after a video surfaced of then-Minneapolis police officer Derek Chauvin kneeling on Floyd’s neck for over eight minutes, despite the man exclaiming “I can’t breathe” multiple times and eventually becoming unresponsive. For New Yorkers, it was all-too-familiar to the death of Eric Garner, who made the same cry while in a chokehold by then-NYPD Officer Daniel Panteleo and whose 2014 death contributed to the galvanization of the Black Lives Matter movement.

Now, major reforms are being passed through the New York State Legislature with a promise to sign them from Governor Andrew Cuomo, while Mayor Bill de Blasio has pledged to enhance the NYPD disciplinary process and reversed course to announce plans to shift funds away from the police department, and New York political clubs are drawing lines in the sand about the importance of supporting police reform.

“We all know that money is power and right now across the country we are seeing how police abuse their power,” said Winsome Pendergrass, a member of New York Communities for Change, in a statement. “We’re calling on our elected officials to reject campaign contributions from police associations. Our representatives need to look out for and invest in our communities, not be in the pocket of police associations.”

Other signatories of the letter include One Queens Indivisible; Yalla Brooklyn; The Jewish Vote; Our Progressive Future; Lambda Independent Democrats of Brooklyn; Rockaway Revolution; and others. The coalition is still seeking groups to sign on as it looks to build a critical mass to influence both government policy and electoral campaigns, wherein many of the organizations regularly make candidate endorsements and encourage their members to support chosen candidates get elected in various ways.

The letter sharply criticizes de Blasio, who has disappointed many fellow Democrats with his approach to policing and police accountability, and who repeatedly defended members of his NYPD recently when questioned about multiple instances of alleged brutality, including when officers drove cars into protesters or when police beat peaceful protestors with batons. He also initially opposed budget cuts many, including signers of the letter, have called for. As of Monday, he said he would shift some NYPD funding to youth services in the upcoming budget but did not specify an amount.

Referring to the police unions, the letter states de Blasio has “shown himself to be too craven to take a stand against these dangerous organizations and against police violence,” and, so, the political clubs “call on the rest of our elected officials and candidates for office to take action.”

In addition to denying campaign donations from law enforcement unions and supporting police budget cuts, the groups ask officials and candidates to commit to reallocating $1 billion of the NYPD’s nearly $6 billion annual budget to social services such as housing, rent relief, youth programming, food assistance, and others. It also asks them to advocate for de Blasio to fire and release the names of NYPD officers who have been accused of excessive force, covered their badge numbers, or committed other misconduct.

The signing organizations also ask officials and candidates to call on District Attorneys to drop all charges against protestors arrested for violating the curfew that de Blasio recently instituted and since lifted, and support other reforms.

The state Legislature, where both houses are controlled by Democrats, is moving a large package of such reforms this week, including the repeal of section 50-a of the Civil Rights Law that keeps law enforcement officer disciplinary records private and has been the bane of police reform and watchdog organizations for years. It also, among other things, would clarify one’s right to record police officers making an arrest, create a special office to investigate police killings, and prohibit the use of chokeholds by law enforcement.

“Criminalizing the use of the chokehold by police or peace officers and prohibiting law enforcement officers from using racial and ethnic profiling are essential steps in bringing sorely needed police accountability reform to New York State,” said State Senator Brian Benjamin, a Manhattan Democrat, in a press release. “These reforms will put New York at the front of the pack in trying to bring justice to the families of Eric Garner, George Floyd, Breonna Taylor, Ramarley Graham, Sean Bell and so many other families across this country who have been victims of police brutality.”

In their letter, the clubs call out the PBA and SBA for lobbying against such reforms and referencing a war on New York City and the mayor on Twitter.

“Police associations like the PBA and SBA have a toxic effect on our society and democracy,” said Fatou Waggeh, a member of the Muslim Democratic Club of New York, in a statement. “You can’t claim to support Black lives while associating with organizations that defend police violence. It’s time to pick a side.”