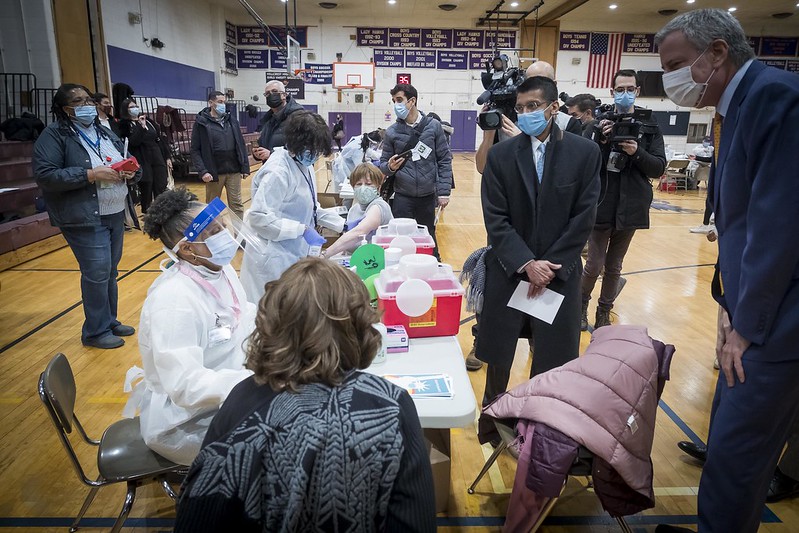 Mayor Bill de Blasio announced on Wednesday that New York City would launch covid vaccination sites at select schools across the city for 12 to 17-year-olds. The program is to start at four schools in the Bronx on Friday, June 4, and move to additional locations in the five boroughs, trying to vaccinate large numbers of kids by the end of school this month. The mayor should be commended for this initiative, along with City Council Member Mark Levine, chair of the Health Committee, who had been advocating for this effort.

The converging developments involving the return to full in-person learning this fall for the school system, and the expansion of COVID-19 vaccine eligibility to adolescents, were strong arguments to use the schools as vaccine sites. But the outreach power of the schools is enormous, and several million adults in the city, the vast majority of them Black and Hispanic, remain unvaccinated.

There are hundreds of junior high schools and high schools available -- with all their security, their gyms, cafeterias, and auditoriums for space, their freezers in their kitchens for storing vaccines, and their widespread proximity to the people in their neighborhoods, who drop their kids or work at schools or simply walk by them all the time -- that could be perfect locations for continued mass outreach. That is why city government should plan to vaccinate adults as well as kids at the schools and ramp this effort up as quickly as possible in order to help overcome some of the gaps in vaccination that we’ve seen.

Here is the city’s breakdown as of May 28 (with data updated through May 27): 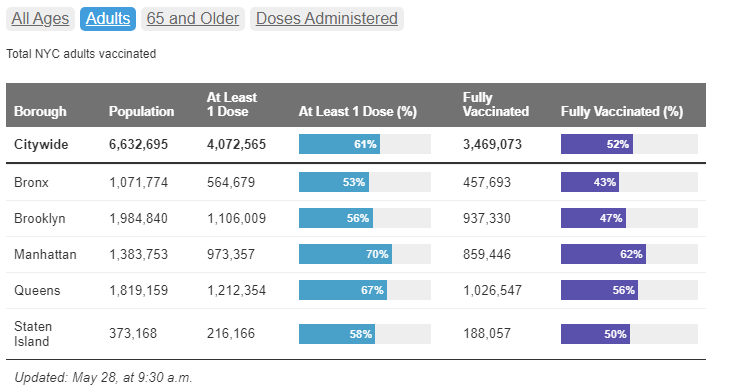 The city’s table shows more than 2.5 million adults still have not received one dose of the vaccine. Data in the city’s table also show that 7% of persons aged 0-17 have received the vaccine. Mayor de Blasio stated in his announcement this week that about 118,000 12 to 17-year-olds have already been vaccinated, about 23% of the city’s population of persons in this age group. That means about 400,000 12 to 17-year-olds are still unvaccinated, nearly all of whom will be in school in September.

Although the city’s overall vaccination rate is showing similar progress to the nation, it hides massive racial and ethnic disparities. This table, from the city’s data set just cited, shows how striking these disparities are:

Only 34% of Black adults have received one dose of the vaccine. That rate is 45% for Latino adults, 52% for white adults, and 76% for Asian adults. The city Health Department offers a caution on the data: some vaccination reports don’t identify a racial or ethnic background, and DOH records show about 11% of the vaccinated adults don’t have their race or ethnicity identified. It means that the actual vaccination rates for the different groups are somewhat higher, but the overall concern doesn’t change. Using the percentages of the city’s population broken down into different ethnic groups from 2019 Census estimates, and comparing those to the percentages vaccinated, I estimate that nearly 2 million of the roughly 3 million unvaccinated adults and adolescents are Black or Hispanic.

The Biden administration said it plans to ship vaccines to pediatricians. A Kaiser Family Foundation vaccine monitoring survey indicates about 40% of parents of adolescents aged 12-17 either have already had their children vaccinated or plan to do so soon. This survey suggests that a majority of adolescents will not be vaccinated in the very near future.

Again, the outreach power of the schools is enormous. Every school has records of the addresses and phone numbers of the families whose children are enrolled. The parents and other family members of the kids can be invited to get vaccinated at the school, and parent associations can be enlisted to encourage parents to use the schools for vaccinations.

The schools should also be available to the general public. The schools have the records of the kids who dropped out, and of the kids who just graduated. Many high school students are “overage” and many kids don’t graduate until they are 19 or 20 years old, and the lowest percentages of unvaccinated adults are the youngest adults, aged 18-24. Sixty-six percent of New York City public school students are Black or Hispanic. The schools should stay open into the early evenings to address one of the most significant hurdles remaining to get the population vaccinated — the work schedules of people who can’t get time off or need time after the workday is over.

Vaccination progress will continue as the summer rolls on;  thankfully the vaccines are widely available at pharmacies and many other sites. But with 3 million New Yorkers unvaccinated, developing the potential of the schools to reach the broad population of the city still unvaccinated is a self-evident proposition.