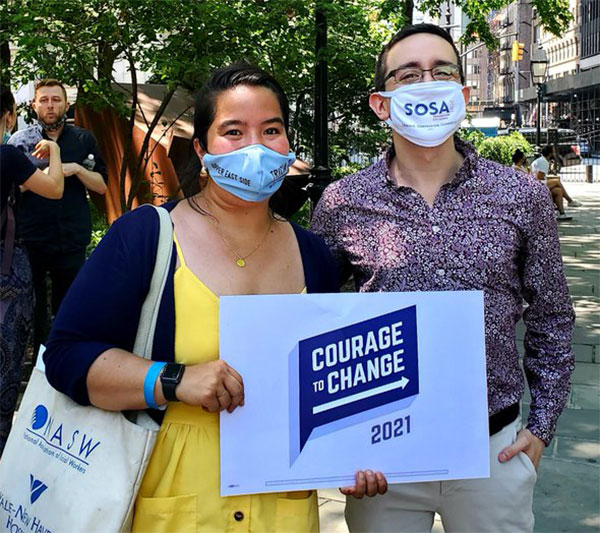 The 2021 citywide primary is the first test of ranked-choice voting (RCV), a system I’ve long supported. I fought to ensure RCV wasn’t delayed for this year’s election. Under RCV, negative campaigning has been de-emphasized as candidates compete to become the second or third choice of their opponents’ voters. RCV increases the amount of democracy in our elections and prevents extreme or widely-disliked candidates from being elected with a small plurality in a crowded primary. It encourages candidates to talk to every voter.

Early on in this race, I decided that as a candidate my approach would be different from the style in which I was trained to speak as a long-time political commentator. I had the space to make this change under the RCV system without compromising my competitiveness. The Trump era made our national discourse markedly crueler and angrier, the inevitable end of a social media dystopia. I don’t want to be a force for tearing my community apart further. I decided I’d consciously adjust my conduct to help promote healing of our divisions. I speak from experience as a staffer in the New York State Legislature when I say diplomacy and trust are essential to passing legislation.

I was humbled when my opponents recently singled out my campaign for its kindness when a PoliticsNY debate moderator asked us if we could say something positive about our opponents. It was easy to offer positive words about every person on my screen, because I’ve had the honor of learning more about each of them away from the cameras.

I knew when I entered the race that I was up against a series of machines. This is not an insult to the candidates who benefit, just a fact of New York politics. To put it bluntly, my campaign was a total longshot. From the earliest days, I was up against some well-liked, hardworking candidates who were going to have club and local elected support locked down. But I genuinely believe there’s room for an outsider voice like mine with policy solutions that aren’t always synonymous with the views of the Democratic Party at-large.

I have the right experience as a New York State Senate aide in the Democratic caucus who helped get legislation like the New York State DREAM Act across the finish line. I’m a professional speechwriter who knows the importance of strong messaging. I’m a longtime journalist who not only understands policy but political realities. Most importantly, I’m authentic. I garnered a reputation in the Senate halls for being an unusually transparent aide who could be trusted, because I always spoke my mind. I didn’t only treat my friends with honesty, but also my opponents.

So I decided to do something unusual, perhaps unprecedented, as a Council candidate. I actively befriended every opponent willing to engage with me in good faith. We’ve built genuine relationships over the course of this campaign. Coffees, phone calls, and fostering camaraderie between our teams. I see no value in villainizing people whose work I respect or creating tension between teams largely staffed by hard-working young people trying to do some good in the world. I’ve learned from my opponents. I hope they’ve learned from me. And I expect us to continue working together long after this race concludes.

I reject my opponent and former de Blasio-appointed Census Director Julie Menin’s campaign claim that no one else is experienced enough to bring us back from the pandemic crisis. I respect Julie’s hard work and have enjoyed my own conversations with her to a degree that would probably surprise both of our supporters. But I hope ranked-choice voting will make zero-sum arguments like these less prevalent in future elections. Voters deserve to know that each of us brings a style, vision, and proven skill-set worthy of consideration by our voters.

None of us will win on the first ballot round. This is just the truth of electoral math. Voters have too many qualified choices for any of us to pass 50% outright. In a new dynamic for New York politics, we need each other to win. This is a microcosm of the actual coalition building skills required to be a successful legislator.

The District 5 City Council race is setting a positive example to the entire city of how ranked-choice voting can change and heal our politics. No matter the outcome, New York wins.

***
Chris Sosa is a Democratic candidate for City Council in Manhattan’s 5th District. On Twitter @ChrisSosa.