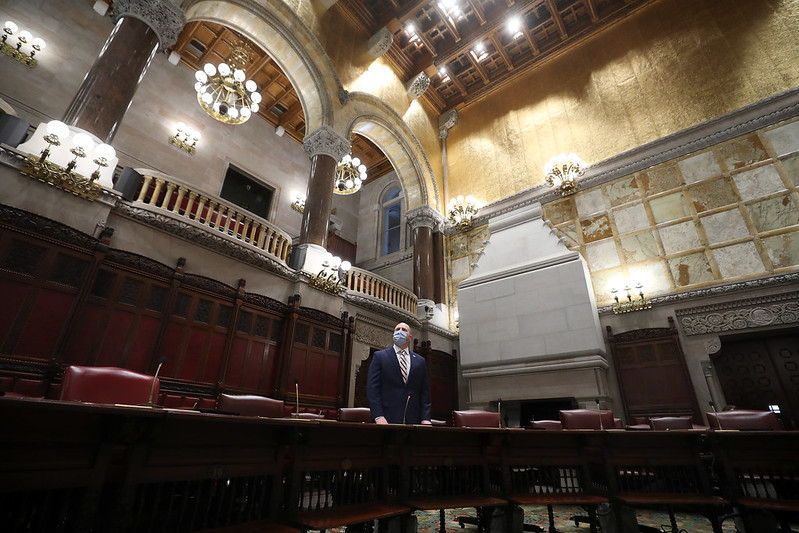 While Joe Manchin and Mitch McConnell compete to see who can block the most policy down in Washington DC, here in New York State our Democratic majorities in the State Senate and Assembly are proving that the government can be good. And that governing can actually solve problems.

Earlier this month, Albany’s 2021 legislative session came to a close and legislators should be proud for having made progress on a host of fundamental issues impacting millions of New Yorkers. The legislature raised $4.3 billion in new progressive revenue to fund major investments in public education and to fuel economic relief in the wake of COVID-19. We saw the historic passage of a first-in-the-nation excluded workers fund for New Yorkers who were denied federal relief. And we saw the long overdue legalization of marijuana, the passage of a host of new voting reforms to make it easier and more secure to vote, new regulations to rein in the gun crisis, and a halt to prolonged solitary confinement in our prisons. And this list is far from exhaustive.

Despite all this progress, Albany’s session coming to a close for the year on June 10 inevitably leads to a few fundamental questions. What didn’t get accomplished? And why does the session end at all? Especially with six months to go in the calendar year.

Let’s start with the second question given it clearly impacts the first. It’s true that in many states across the country, state elected officials work as a part time legislature. But here in New York, electeds are full-time employees. It’s also true that our state electeds do more than just legislate. They represent their communities and through constituent services, help solve locally relevant and deeply personal challenges for their constituents. But as seen in the list above, it’s the legislation that gives taxpayers the biggest bang for their bucks. In other words, we elect them to legislate.

And an arbitrary six-month session in New York is holding us back. Moving to a full-year legislative calendar with ample recesses to allow for critical in-district work would unlock massive productivity in Albany. While you certainly can’t look to Congress for great examples of productivity these days thanks to the Jim Crow filibuster and a GOP that’s primary goal is to prove government fundamentally doesn’t work, we should look to their calendar as the model for New York’s legislature. Or to California. California’s state legislature is paid a full-time salary just like New York’s and they work a full calendar year. Simply put, we need our full-time state elected officials to, well, work full-time.

And this isn’t just about creating more time to pass policy. It’s also about removing one of the most frustrating tools in our elected officials’ toolbox that puts a pause on progress. The June end of session deadline acts as an unnecessary and misused “cliff” year over year to block or to slow down important policies. “We just didn’t have the time to get it done” is a phrase we have become all too used to hearing from the middle of June through the end of the year. So this brings us to the first of the questions raised above. What didn’t pass this year?

Let’s take the climate crisis to start. There is no denying that every day we delay action on climate, the more likely it is our planet will be uninhabitable to our youngest generations. Back in 2019, the New York state legislature passed the Climate Leadership and Community Protection Act (CLCPA), a nation leading bill that set aggressive and necessary emission reduction targets for the state. But without further legislation to enact the guardrails, programs, and investments to achieve those targets, the CLCPA is just a promise. And promises won’t solve the climate crisis. This year, the Climate and Community Investment Act (CCIA) — which would raise $15 billion per year from corporate polluters and use it to create good, green jobs, invest in frontline communities, and build a renewable economy for New York State — was the legislature’s best opportunity to turn that promise into action. And yet it didn’t pass. In fact, it didn’t even get a vote.

So I guess it’s better luck next session? In the face of an existential crisis, our plan is to take a break for six months?

And make no mistake, this is just one of many examples where real issues go unresolved for months because of the legislative calendar.

For example: Despite being prioritized in the State Senate, five bills supported by the Sexual Harassment Working Group and the Adult Survivors Act, which would give victims a one-year look-back period to seek justice through civil cases, stalled in the Assembly. Assembly leadership used the clock-running-out excuse to justify the failure to pass these meaningful policies.

Last year, when in the face of a global pandemic that was wreaking havoc on our communities, and disproportionately so on Black and brown New Yorkers, the legislature was quiet from July through December. It’s true, many state legislators were working tirelessly in their communities supporting mutual aid and other constituent services, but their mighty power of policy was left totally unused.

To be clear, it’s not to say these issues are easy to solve. It would be crazy to suggest that legislators have an easy job or that massive legislation like the CCIA doesn’t take time to get right. But that’s exactly the point. There should be no “end of session rush.” Moving to a congressional style, full-year legislative session is better for all involved. Except for the bad actors who want the government to do less or fail more. But New Yorkers continue to show up at the polls to elect better officials each year. And better electeds with more time to legislate will surely bring us better outcomes.

It’s time for a full-year legislative calendar in Albany.

***
Ricky Silver is a co-lead organizer of Empire State Indivisible. On Twitter @es_indivisible.