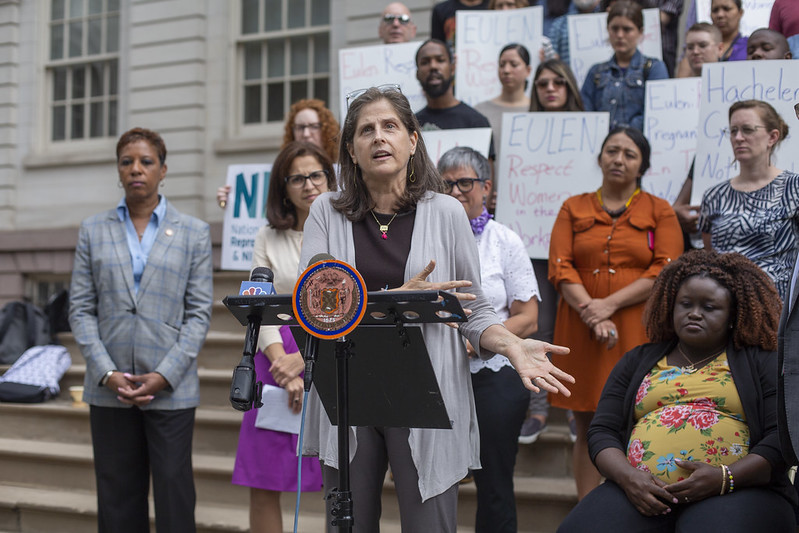 I am proud to support and fight for workers in the human services sector. The city’s 125,000-plus social service workers provide essential services to 2.5 million New Yorkers, especially seniors, children, people with disabilities, and our neighbors experiencing homelessness. Most recently, they have been absolutely central to New York City’s response to the pandemic, ensuring that the most vulnerable do not fall through the cracks.

Human services workers are predominantly women and women of color; many are single moms raising a family on one income. For the past eight years, the sector and its allies have fought to convince New York City (and State) government to fund service providers enough so they can pay their workers a decent wage, provide full benefits and a pension, and have enough overhead for programs to function. The battle is Sisyphean.

During the past 16 months especially, the City has treated the human services sector as a second-class partner. It required workers employed by non-profit providers to come to work (when many City workers did not, due to health and safety concerns); cut programs, which led to sudden layoffs during the height of the pandemic; allowed a cost-of-living wage adjustment (COLA) to expire; and failed to provide frontline workers with PPE.

Last month the City Council passed legislation that mandates that these non-profit providers abide by “labor peace” agreements in their workplaces -- in other words, providers cannot interfere with any effort on the part of their employees to unionize. I am unabashedly pro-union and voted for the bill’s passage, but the legislation obscures the real obstacle to better pay and conditions for human services workers: government.

Local government has gotten away with underpaying human services providers since they began as mission driven non-profits born from faith-based institutions. It’s been a great ride for government -- which has been able to maintain a much wider social safety net at bargain prices. The terrible truth is that both the City and State are responsible for leaving tens of thousands of human services employees in poverty.

The double standard cannot be denied. Our governor was lauded (rightly so) for backing a minimum wage of $15 an hour across New York. All businesses in the private sector complied. However, State contracts with human services providers were never increased to cover the $15 hourly wage for workers.

Similarly, our mayor has been praised (again, rightly so) for launching free universal pre-kindergarten. However, his administration continues to underfund non-profits providing UPK, making it impossible for them to pay competitive wages to match those of UPK teachers in public schools. Not surprisingly, the non-profits can’t retain UPK teachers because of the lower salaries, and children experience a revolving-door of teachers.

The legislation passed last month basically admits that we’ve lost the battle to get the City and State to support good wages and benefits for the workers who serve the most vulnerable New Yorkers. This is nothing to be proud of. Nonetheless, the legislation offers the hope of a different approach. We will build on the strength and wins of unionized labor, which has successfully negotiated higher wages for municipal workers, to bring wages up for those in the non-profit sector.

After my eight years fighting in vain to have the City fairly and fully fund human services contracts, I'm encouraged that we are bringing in the power of the union. But there are questions raised by this legislation that must be addressed.

The central issue pertains to funding. If unions are able to negotiate better wages and benefits for their new members, where does the money come from if the non-profit’s only source of income is government? Thus far, government has categorically refused to fully fund existing social service contracts, and now we are going to be asking them to increase funding for collective bargaining.

We need to make sure that this recently passed legislation does not ultimately create an unfunded mandate and more administrative burdens for providers who have already been pushed to the brink. The human services sector must be fully involved in the bill’s implementation -- and guaranteed full funding. And we need to be honest about the fact that the bill shifts responsibility for properly paying government-contracted human services workers to organized labor -- its passage is an admission our government leaders have failed these workers.

At the end of the day, government must stop taking advantage of our non-profit institutions, and providers and their workers must be paid fairly once and for all. This is the case whether they are unionized or not.