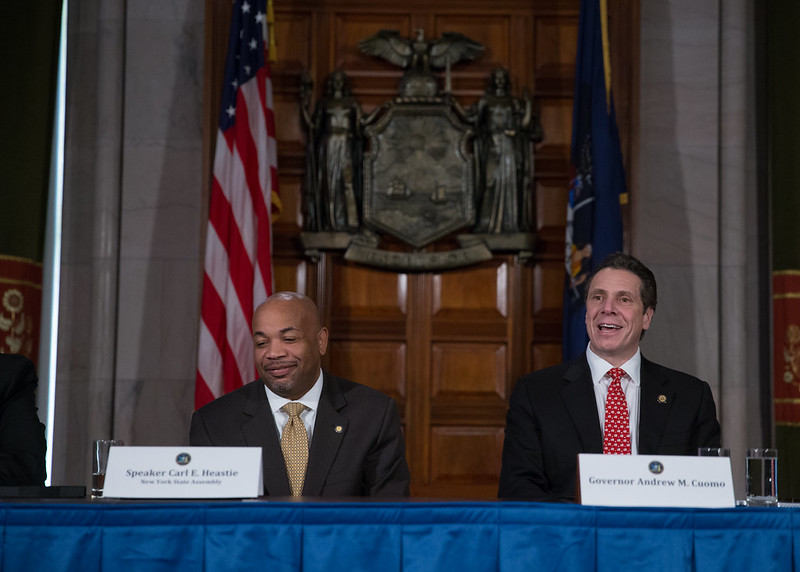 Friday brought sad but unsurprising news in Assembly Speaker Carl Heastie’s decision to call off impeaching Governor Andrew Cuomo. For survivors, lawmakers, and advocates who doubted the Legislature would impose real accountability, this decision confirmed their worst fears. While Cuomo’s promised resignation is a monumental fall from power and an important safeguard against future abuse, it provides little justice for those he attacked in the past.

There are lots of political reasons why officials might want to avoid impeachment, but Heastie’s surprising justification is largely a Constitutional one — and he’s completely wrong. Heastie said in announcing the plan to drop impeachment that the New York State Constitution “does not authorize the legislature to impeach and remove an elected official who is no longer in office.” Not only is this false, but the claim raises serious questions about the Speaker’s candor to his colleagues and the public.

Heastie’s support for this conclusion is a memo from unnamed authors, advising the Assembly on whether it could impeach Cuomo. One small problem: it answered the wrong question. Heastie’s memo conflates the power of the Senate and that of the Assembly, as well as confusing the power to punish with the power to impeach. As I responded when posting a line-by-line critique, “If my staff brought me a memo [this] bad…I'd be baffled.”

First, the document presumes Cuomo’s out of office, but (in fact) he hasn’t yet resigned. Sure, he gave a press conference, but as the Governor’s televised denials have taught us: just because Cuomo says it on TV, it doesn’t mean it’s true. Even worse, there is no evidence yet that Cuomo has submitted his resignation letter, and under New York law, he could rescind even a formal letter up until the day it takes effect.

Even if Cuomo were out of office, the Assembly still could act, and it should. There are open questions about whether the State Senate (technically sitting jointly with New York’s highest court as the Court for the Trial of Impeachment) could bar Cuomo from running in future elections, but the power of the Assembly is clear.

Under our Constitution: “The assembly shall have the power of impeachment by a vote of a majority of all the members elected thereto.” That’s not an excerpt, that’s the whole of what our Constitution says about impeachment of any official. If there’s a majority vote, the Assembly has the power to act. If Heastie wanted just an honest analysis of his chamber’s own powers, the memo wouldn’t have run six pages, it would have been a short paragraph saying “yes.”

Even worse, the Assembly memo then confuses things further on the Senate side. There is a point of genuine uncertainty about the Senate’s power to bar Cuomo from holding future office, but the authors turn it into something much broader. They say that simply because the court may not have the power to punish, it doesn’t have the power to hear the case at all.

If you strip away the legalese, this proposition is laughable. This would be like telling a judge that since you think you have a winning case, you just won’t bother showing up to court at all. Under precedent from around the country, it’s clear that the Senate could force Cuomo to stand trial, even out of office.

The last point is unclear, and one for the Senate itself to decide: can Cuomo be punished after resigning? Today, as he continues to control the levers of power, that question is merely a hypothetical. But even if he had already left, the answer would be unclear. Scrambling for any justification for inaction, the authors of the Assembly memo hang their hat on the narrowest of pegs: the word “and.” The authors claim that unlike the federal constitution, New York’s only allows office holders to be removed from office and barred from running in the future.

To the Assembly sources, this narrow reading means that Cuomo can’t be barred if he’s already out of office and incapable of being removed. Cute trick, the only problem is that our federal constitution (which is older than New York’s impeachment clause) has nearly-identical language that had been interpreted much more broadly at the time ours was ratified.

But while the grammar may be ambiguous, the injustice of Cuomo’s immunity is clear. There is no civil or criminal process in the state (other than impeachment) that could block him from holding office in the future. And other states have previously blocked their governors from escaping accountability by resigning at the 11th hour. To these states, the need for justice was more important than a narrow, formalistic reading of the impeachment powers.

Resignation allows Cuomo to depart on his terms, stage managing his exit at a moment he should be stripped of all power. Already, the Governor has started his post-resignation media strategy, reframing his defeat as magnanimity. In an interview with New York Magazine’s Andrew Rice and Laura Nahmias, Cuomo belligerently claimed: “I’m not gonna drag the state through the mud, through a three-month, four-month impeachment, and then win, and have made the State Legislature and the state government look like a ship of fools….”

Always the pugilist, Cuomo will continue to fight for his legacy long after he leaves the Governor’s Mansion. And with $18 million in his campaign coffers, Cuomo won’t be fighting alone. Ever the political tactician, even in exile, Cuomo is a force to be feared. He may not be a modern-day Napoleon, but he won’t be relegated anywhere as distant as Elba. Shipped away to the suburbs, eking out a living on his $50K state pension (and trivial $5 million book advance), Cuomo will find a way to rebuild his image and his empire – unless legislators act.

In the end, once Cuomo is finally gone, the Senate may be powerless to bar him from holding future office. But that day has not yet come. Until the moment Cuomo leaves, the Assembly that has so-long delayed accountability must finally, and forcefully, act.