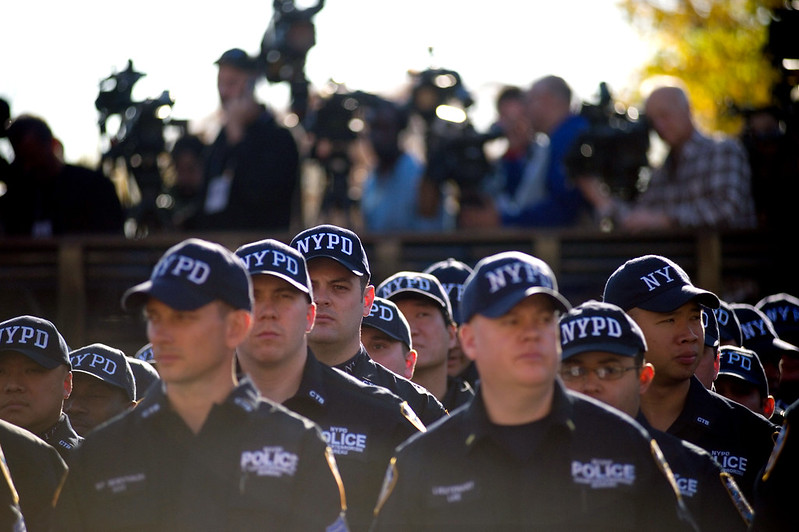 The tragic impacts of the September 11 attacks stretch far beyond the nearly three thousand people who lost their lives that day 20 years ago.

Over the last two decades, government forces have trampled on civil rights and liberties in the name of 9/11. Deeply entrenched aspects of our society like the ubiquitous surveillance state that follows us wherever we go, the military mission creep that’s infected our domestic law enforcement, and the unbridled police power that departments wield are all direct results of actions taken in the name of preventing another attack.

Arab, Middle Eastern, Muslim, and South Asian communities were the first to feel the repercussions of that fateful day. They were illegally mass-arrested, beaten, and killed in the days and weeks immediately following September 11.

Eventually, the abuses justified by 9/11 impacted all of us – though they still fall disproportionately on AMEMSA communities and other Black and Brown people. Many of the things we don’t think twice about today would have seemed unimaginable to Americans before the twin towers fell.

Here in New York, it’s now taken for granted that tens of thousands of cameras watch nearly every move we make. The same is true in cities and towns across the country.

The New York Police Department – the largest police force in the country – proudly touts its all-seeing Domain Awareness System as “one of the world's largest networks of cameras, license plate readers, and radiological censors, designed to detect and prevent terrorist acts, but also of great value in criminal investigations” [emphasis added].

Those last eight words reflect a key component of the 9/11 legacy. Attacks like the ones on September 11 are incredibly rare, but that doesn’t mean tools purportedly designed to stop them are used sparingly. Instead, nearly all of the weapons, laws, and agencies ostensibly created to stop attacks inevitably get wielded for other, much broader uses.

The military equipment deployed during two decades of endless war, for example, always comes back to the streets of America, most often in poor Black and Brown neighborhoods. Whether it’s mine-resistant tanks that rumble through our neighborhoods, drones that hover above us, Stingrays that spy on our cell phones, or x-ray vans that can see through our walls, the military’s tools of war are now used to brutalize and keep tabs on Americans.

Whole agencies that were created to defend national security are now deployed against people without any even alleged ties to violence. Immigration and Customs Enforcement, for instance, was created in 2003 to “better protect national security.” But that mission is hard to square with ICE agents raiding work places, staking out courthouses, and invading the homes of mostly Black and Brown immigrants who – by ICE’s own admission – rarely pose a threat to national security.

While new bureaucracies like ICE quickly broadened their mandates, police departments seized on 9/11 to accumulate more power and cloak their actions in increased secrecy.

Raising the specter of terrorism, the NYPD successfully convinced a judge in 2003 to weaken the rules meant to prevent the department from surveilling New Yorkers engaged in lawful activities.

Then in 2012, the Associated Press revealed that the NYPD had dispatched undercover officers into predominantly Muslim neighborhoods and used informants, known as "mosque crawlers," to monitor sermons, even when nothing illegal was taking place.

The NYPD put entire neighborhoods, hundreds of mosques, and numerous student groups under surveillance based on their demographics, not on any evidence of criminal activity. After six years of this unlawful spying, the NYPD admitted this work never produced a single lead or sparked one terrorism investigation.

After a lawsuit brought by the ACLU and the New York Civil Liberties Union, the rules preventing unlawful spying by the NYPD were strengthened and the unit responsible for snooping on Muslims was disbanded. But the message was clear: 9/11 fears can and will be used to justify police power grabs.

Blanket surveillance is not just invasive and ineffective, it’s actively harmful. Communities targeted by surveillance are publicly criminalized and vilified, which can lead to physical abuse by law enforcement, incarceration, deportation, and other life-shattering consequences.

The NYPD reacted to proposed legislation that would force it to reveal the invasive surveillance technology it uses to spy on New Yorkers by promising – without any evidence – that this information would be used by terrorists. Now this legislation is the law of the land, but the NYPD is still using the fear of terror to subvert it.

The NYPD also uses this rationale to cover up its tracking of protesters. The department is not alone. Across the country, law enforcement agencies know that evoking September 11 is a tried and true strategy for hiding what they’re up to.

What the aftermath of the 9/11 attacks has made abundantly clear 20 years later is that the freedoms and rights we trade away in the midst of an emergency are exceedingly difficult to claw back once that emergency has faded from the headlines.