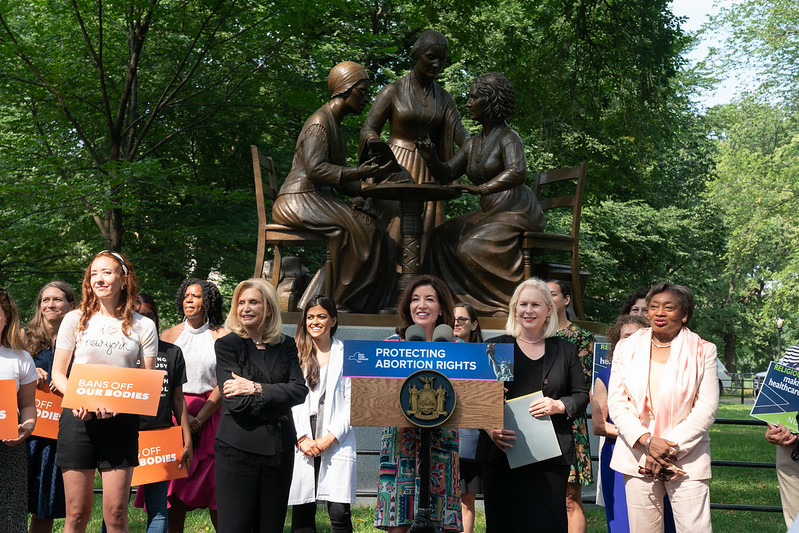 In response to the recent ban in Texas and upcoming Supreme Court case, Governor Kathy Hochul declared New York a safe harbor for abortion care at a rally on September 13. Hochul noted, rightly, that the state has an obligation to fully implement the 2019 Reproductive Health Act (RHA). To that end, she directed state agencies to launch public information campaigns directed at patients and providers about their rights and responsibilities under the RHA.

Senator Kirsten Gillibrand followed by voicing her support for the Women’s Health Protection Act, which would codify a right to abortion care into federal law, just as the RHA does in New York State.

These pronouncements of solidarity with people in Texas and other legally restrictive states are welcome first steps. As the right to safe, legal abortion nationwide hangs in the balance, however, reactive measures are no longer enough—if New York is to become a safe harbor for abortion, officials at every level of government must champion bold, proactive policies that pre-empt attacks from the powerful anti-abortion movement.

First, they must make abortion, and all forms of sexual and reproductive health care, accessible to all New Yorkers.

In 1994, SisterSong Women of Color Reproductive Justice Collective defined reproductive justice as “the human right to maintain personal bodily autonomy, have children, not have children, and parent the children we have in safe and sustainable communities.”

For decades, the fight for reproductive justice in City Hall and Albany has been relegated to a small handful of electeds and constituent activists. Access to abortion care isn’t simply a “women’s issue,” but City Hall and Albany continue to treat it as one. Marginalized New Yorkers, particularly the Black birthing people at the forefront of the reproductive justice movement whose communities are disproportionately affected by our collective inaction, know that abortion access is a social, economic, gender, and racial issue.

In New York City alone, there are at least 11 “crisis pregnancy centers,” which are fake health clinics that use lies and unauthorized medical practices to dissuade vulnerable birthing people from getting abortions. Anti-abortion extremists in Queens are now allowed, thanks to the 2nd U.S. Court of Appeals, to terrorize New Yorkers who try to access or provide reproductive health care in clinics.

While our city became the first in the nation to provide direct funding for abortion, the $250,000 that the City Council has set aside the last two budget cycles for the New York Abortion Access Fund isn’t nearly enough to cover the up-to-$3,000 cost of abortion care for low-income and uninsured New Yorkers, let alone out-of-state birthing people.

These are some of the many hurdles New Yorkers face in accessing abortion care, and abortion care is only one piece of the larger problem. Systemic racism in health care for pregnant and birthing New Yorkers, inadequate postpartum care and early childcare, stigmatizing, outdated sex-ed, the proliferation of gender-based and sexual violence—we could go on—are just some of the others. In the spirit of reproductive justice, we cannot talk about shoring up abortion access in New York without also talking about the persisting inequities in all facets of sexual and reproductive health care.

Now that we face an impending national crisis, one that many marginalized communities have already been facing for years, New Yorkers are looking for ways to join the fight. Using our collective experience, knowledge, and skill sets, we’ve put together a non-comprehensive action guide that outlines steps New York elected and government officials can take, at every level and in almost all offices, to truly make New York a safe harbor for abortion care.

The guide also includes graphics and call transcripts that everyday New Yorkers can use in their activism.

The anti-abortion movement has spent millions to help elect extremists who champion their cause in state legislatures and city governments across the country. Yes, greater gender representation, as seen in our first woman Governor, and New York City’s first women-majority City Council come January, could result in more substantive gender representation in New York politics as well. But simply electing more women to power doesn’t necessarily ensure those political leaders will focus on reproductive justice. As it stands, champions of reproductive justice are still largely on the outskirts of political power.

The country faces the biggest threat to Roe v. Wade in decades. It’s incumbent on New York to set the example for other progressive cities and states that could face an influx of out-of-state patients seeking abortion care. We must elect candidates to office who are committed to making that possible. If we succeed, we can show purple and red cities and states, particularly those on the verge of securing Democratic wins in their legislative or executive offices, that reproductive justice advocates can run and win.

***
Astrid Aune is a community organizer and 1L at CUNY School of Law. Elizabeth Adams is a Legislative Director at the New York City Council, formerly served as the Director of Government Relations at Planned Parenthood of NYC and was a candidate for City Council in Brooklyn’s 33rd District. Jessica Madris is a freelance reporter and writer covering gender policy, particularly at the local level, with an MPA in Urban Social Policy and Gender and Public Policy and experience in city government and politics, and a postpartum doula in Brooklyn.