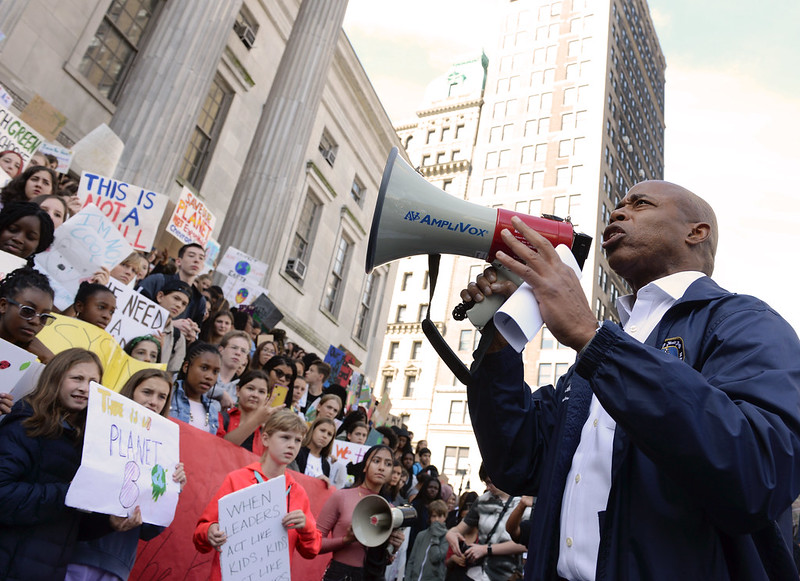 Earlier this month, Senator Joe Manchin appeared to scuttle the Biden Administration’s Build Back Better bill, which promised to be America’s largest ever investment into clean energy.  Just like that, local governments – which have been shouldering the climate leadership load for the last decade – could be losing their best chance to see active federal investment to avert the climate crisis now underway.

Luckily, cities like New York are already leading. This month, the City Council passed and Mayor Bill de Blasio signed a ban, with limited exceptions, on using fossil fuels in new buildings. Along with other actions, it makes a remarkable finale for the de Blasio Administration’s climate portfolio, which includes passing a world-leading climate and jobs law (aka Local Law 97), divesting $3 billion in city pension funds from fossil fuels and unleashing billions into clean energy, securing state approval for clean energy transmission into the city, enacting landmark environmental justice legislation, and investing billions into infrastructure and housing to make the city safer and more resilient.

As Mayor-elect Eric Adams prepares to take office, it’s important that New York City goes even further to continue transitioning away from fossil fuels while preparing for the ever-growing risks of storms, heat, and sea level rise that will continue to disproportionately impact our most marginalized communities. His administration now inherits world-leading policies and an incredibly talented climate team. But that won’t be enough.

Here are seven ways for the Adams administration to go even further and be the climate leader that the world needs.

1. Appoint a Deputy Mayor for Climate
The Mayor should improve climate governance by appointing a Deputy Mayor, with clear public accountability, to convene and lead a cabinet of agencies and offices that must work together to slash emissions, build resilience, secure environmental justice, and expand the dialogue with the communities and civic leaders who are critical to this work.

2. Expand Local Law 97 and Take Next Steps to Decarbonize the City
The Mayor should send a clear signal that he will enforce Local Law 97, which sets strict caps on the carbon pollution emitted by large buildings, providing certainty to building owners as they navigate the energy transition.

The city must also continue its efforts to secure clean energy transmission from hydropower, offshore wind, and solar. It needs to keep electrifying vehicles and expanding busways and protected bike lanes. And new actions will be needed, like electrifying our port facilities, rolling out citywide organics composting, and decarbonizing small buildings.

3. Promote Environmental Justice
It’s clear that historic choices and policies have meant that some communities, largely indicated by income and race, bear a disproportionate impact of pollution, flooding, heat, and other climate impacts. The Mayor should embrace the Environmental Justice for All report, now under development, to reverse this history, embed environmental justice into the city’s decision-making, and promote public health in our frontline communities.

4. Reduce Embodied Carbon
Many New Yorkers know that 70% of the city’s greenhouse gas emissions come from the city’s 1 million buildings. Less well known is the role that consumption (the products we buy, the foods we eat, or the way we build) plays in our global carbon impact.

The Mayor should direct his team to include these “Scope 3” emissions in its greenhouse gas inventory. And the city can take immediate steps to reduce these emissions, like adopting clean construction standards into the building code or upgrading procurement rules to reduce greenhouse gas emissions from purchased products and food.

5. Protect New Yorkers
As we continue to learn from extreme weather events, there is still much more to be done to protect New Yorkers from flooding, heat, and sea level rise. The Mayor should speed up investments into physical infrastructure like storm sewers and floodwalls or lighter-colored pavements, and nature-based solutions, like oyster reefs or bluebelts, across the five boroughs and continue baking resilience into our building and zoning codes.

6. Strengthen Long-Term Planning
The city’s planning efforts, built up over time by a variety of legislative mandates, are not always coordinated. The Mayor should release an updated strategic plan, due in April 2023, that lays out a new approach to the intersection of land use planning, capital budgeting, strategic planning, and the variety of other plans issued by the city. All of these can be better coordinated with community input to make all land use and capital budget decisions climate-smart.

7. Empower Local Partners for Global Action
As the home of the United Nations, Wall Street, media and cultural institutions, and a thriving set of civic leaders, universities, activists, and community-led organizations, New York City already has an out-sized influence in the world. The Mayor should further embrace these relationships and convene local and global partners to spur greater financial investment and cultural support for climate action.

The whole city, in fact the whole world, is rooting for the Adams Administration to succeed on climate because what happens in New York City matters everywhere. And regardless of what happens in Washington, there is no greater issue that matters to humanity than confronting our climate crisis and ending the age of fossil fuels. The world needs New York City to lead the way.