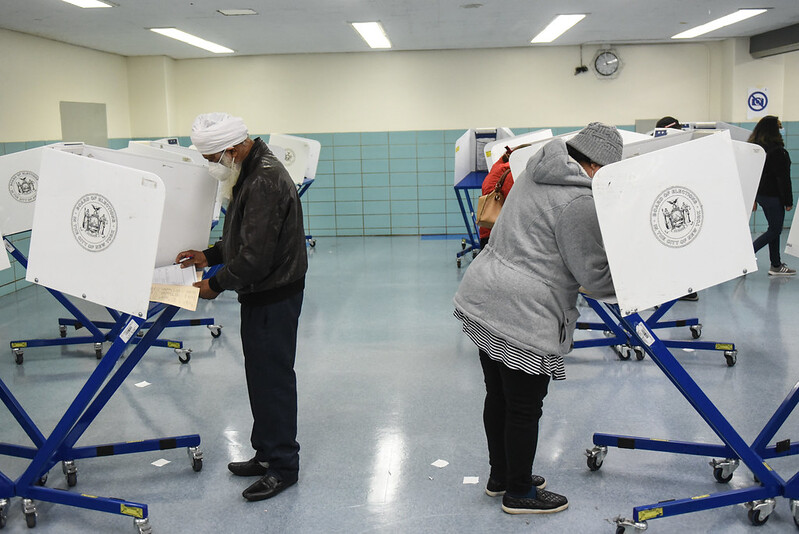 Approximately 23% of registered voters turned out for the 2021 New York City general election. This appallingly low number actually understates the extent of the challenge to political legitimacy because the outcome of all but a few races for City Council and Borough President were determined in the Democratic primary in June. In that election, approximately 25% of registered voters cast a ballot.

This pattern is typical of past elections as well, with only a handful of notable exceptions in the race for Mayor in which there was a viable Republican candidate. Indeed, in 2013, the last time there was a mayoral election with no incumbent running, 24% of registered Democrats voted in the primary and only 24% of registered voters turned out for the general election.

There are differing opinions about what is to be done to improve voter participation in New York City, and whether these tragically low numbers are even a problem at all. In a recent New York magazine column, “Why Low Voter Turnout Isn’t the Problem Everyone Says It Is,” NY1 anchor Errol Louis, whose work and voice I deeply appreciate, argued that many recent attempts to expand voting have been made, yet for municipal elections turnout remains low and that’s OK because it is those who care enough to vote who are participating.

“It’s possible that only 20 percent of New York voters are paying attention, educating themselves and taking time to vote on matters of importance,” Mr. Louis writes, and “If the majority are too busy, distracted, or apathetic to cast a ballot, so be it.”

While in some ways Mr. Louis’ arguments are appealing, there are important reasons why some citizens do not vote, including poverty, distrust, and pessimism about the possibilities of change, not to mention ongoing laws that make it harder to vote than it should be. It is our collective responsibility to do everything we can to encourage greater participation rather than passively accept low voter turnout.

Mr. Louis contends that low voter turnout has different roots from what is often supposed and rightly points out that some of the prior efforts to increase turnout have not really made much of a dent in the problem. But there are two changes that could make a big difference, and I urge Mr. Louis and others who care about New York political participation to consider them more fully.

First, Mr. Louis aptly notes that the most important reason for low voter turnout is the fact that New York City elections are held in odd-numbered years. In New York City, and throughout the country, voter turnout in odd-numbered years, when there are no state or federal elections to stimulate political interest and activity, is significantly lower.

Indeed, voter turnout for New York state elections is roughly twice as high as for New York City elections. There is a long, complex history to the change of city elections from even-numbered to odd-numbered years. At least part of the reason was the desire of Republicans and reformers to depress voter turnout and thereby weaken the Democratic machine. The upshot is that the city’s election calendar is now set in the New York State Constitution. However, that does not mean it can’t be changed.

To be sure, there is likely to be opposition, especially from city elected officials and their supporters who are accustomed to the current system. Nevertheless, there is a potential trade-off for them — an extra year in office. The simplest way to transition to even-numbered year elections would be to amend the State Constitution to that effect and to reschedule the 2025 City elections to 2026. Whatever disadvantage some might see in such a postponement is more than counterbalanced by the certain increase in political participation that it will achieve for many elections to come.

The second major obstacle to greater voter turnout is the system of closed party primaries. Given the fact that 70% of registered voters in New York City are Democrats, the results of nearly all municipal elections are determined in the Democratic primaries, from which 1.08 million independents and 566,000 Republicans are excluded.

A proposal to create an open primary was placed on the ballot by a New York City Charter Revision Commission in 2003, but it was rejected by the voters in a low-turnout, off-year election. Mr. Louis and others oppose open primaries (often called non-partisan primaries) on the ground that political party labels are useful and party activity lies at the core of politics. That criticism misses the mark.

In an open primary as conceived by the 2003 Charter revision proposal, candidates run with party labels and political parties get to organize and support candidates as usual. The State of California has had such a system for a number of years now, and it has not diminished the role of parties in any noticeable way. What it does accomplish is to increase voter turnout and ensure that the general election is as competitive as it can be (often between two Democrats).

Those opposed to open primaries point to two features. First, voters of all parties get to vote in the primary and thus have a say in who the final two candidates will be even though those candidates may be of a different party from many of the voters. For example, in New York City, where the final two candidates will often be two Democrats, independents and Republicans will get to participate in the selection of the (likely) two Democratic finalists. This seems entirely reasonable.

The purpose of an electoral system is not to further the interests of political parties or to privilege the votes of their members but to establish the best way to determine the will of a majority of the voters. The current primary system fails to do this; an open primary would be a significant improvement.

Second, open primaries do not guarantee that candidates of all parties will appear on the ballot in the general election. The candidates in that election will be the top two vote-getters in the open primary, which in New York City will often both be Democrats. This is as it should be. There is no reason why all political parties should be guaranteed ballot access in the general election if they cannot garner enough support to finish within the top two places in an open primary, especially where, as here in New York City, the result is usually an uncompetitive general election that produces low voter interest and turnout.

Candidates from all parties, as well as independents, who qualify for the ballot, could compete throughout the election cycle while the system of ranked-choice voting ensures that the winner has the support of a majority of the voters.

Moreover, unlike the calendar for New York City elections, the establishment of an open general election without a primary does not require either a state constitutional amendment or indeed any action by the State Legislature; like an open primary, it is within the home rule power of the City Council or a Charter Revision Commission.

In sum, if we are serious about increasing voter turnout and the competitiveness of our municipal elections, we should (1) move the elections to even-numbered years and (2) establish open primary elections or abolish primary elections, leaving it to ranked-choice voting to produce winning candidates with majority support in a wide open general election.