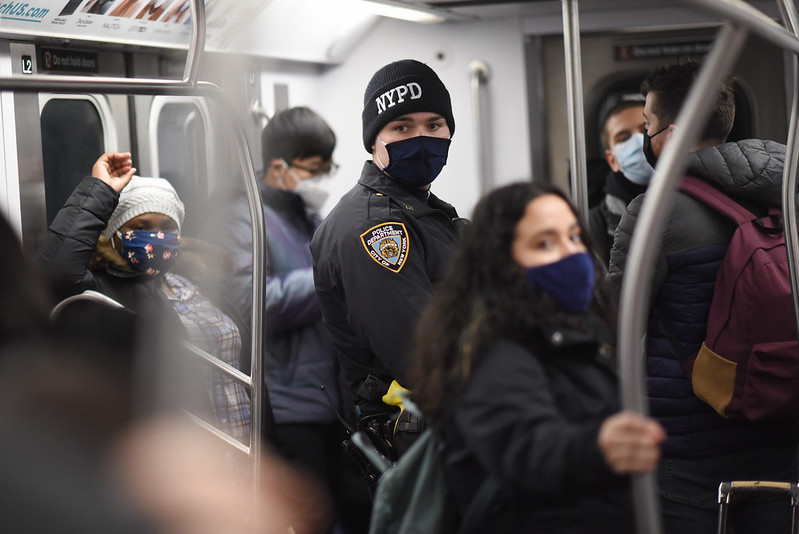 My friend and I had left the theatre on 42nd Street around 11 p.m. on a recent beautiful night. We walked peaceably to catch our usual #1 train at Times Square—the station where a young woman, Michelle Go, had been pushed to her death in front of a train by an apparently deranged, homeless man just days earlier.

The platform was packed but the train, also packed, came quickly. Almost immediately we sensed something was wrong, as people shifted uncomfortably and looked to the back of the car, where a man was yelling obscenities.

“Shut the fuck up,” came the man’s voice.

“Sleep tight, my someone

Our star is shining its brightest light…”

I pulled out a dollar, which she saw, stepping forward to take the money without pausing her song.

Suddenly he was there beside her, big, menacing, and mean: “Once and for all shut the fuck up or I’ll do it for you.”

She whirled and lunged “Touch me and I’ll rip your fucking face off.” Shocked and silenced, he froze, as did everyone. The car doors opened, my stop. She exited ahead of me and disappeared. A survivor, apparently.

Nothing is good about this story except that it could have ended far worse.

This is what we’ve come to—our subway system, the lifeline of New York, precarious, unpredictable, dangerous. Bizarre episodes occur regularly, reflecting disorder, and far more often than in the pre-pandemic past, ending in violence.

New York Needs Its Subways to Work
"When the subways work, the city works,” said the late planner, Alexander Garvin, on the fifth anniversary of the 9/11 terrorist attacks. The Bloomberg administration had put huge resources and concentrated effort into rebuilding downtown and its public transportation, and New York was thriving, despite many expert predictions to the contrary.

When the subways don't work, New Yorkers worry—and neighborhoods decline. And right now, the subways aren’t fully working, and New Yorkers know it. Ridership is down by more than a third over the month of January, coinciding with Omicron and unignorable violence, Or to think of the numbers in another way, daily subway trips fell from a pandemic-era high of 3.4 million in early December to only 2.57 million trips on Jan. 31—roughly half the pre-pandemic ridership of 5.5 million.

The NYPD reported 461 felony assaults in the subways in 2021, a level not seen since 1997, said the MTA. The system also had eight homicides last year, the highest number since data was first tracked.

Reported crime is up, as is the sense of disorder. Lieber says that the presence of homeless people in cars and in stations is also damaging. Their number is large – some 1,600 homeless people are living in the subway system, estimates Robert Mascali, a former city homelessness official and vice president for Supportive Housing at Women in Need.

Lieber told CBS2’s Marcia Kramer, “They are scaring our riders. They are having a disproportionate impact on not just riders’ sense of vulnerability, but on the conditions in the system.” To Kramer’s question, “How do you get them out of the subways?” Lieber answered inconclusively: “Our rules of conduct in the subway system say that if you’re engaged in erratic behavior, if you’re doing things that impact on other people you may not belong there.”

What is to be done? The MTA is in the difficult position of being forced to handle an immense social problem—homelessness—that is far outside its mission or area of expertise. Meanwhile, the responsible agency, the New York City Department of Homeless Services, has allowed the subway’s underground population to grow unchecked, said state Comptroller Tom DiNapoli. DHS and the MTA have paid the outreach contractor, the Bowery Residents Committee, an aggregate of $88.8 million since 2010. DiNapoli called the outreach services, which are supposed to help homeless people find shelter, “shoddy.” The lack of results has been obvious to regular subway riders for years, even pre-pandemic.

I take the subway nearly every day, even as friends and neighbors urge me not to, which they do partly because our #1 train, running the length of the West Side, seems to be especially vulnerable to chaos. Sometimes it’s disturbing but non-threatening—the man the other night in the frigid cold, sleeping covered by a marathon silver sheet, bare feet sticking into the aisle. More often it’s alarming—the woman sprawled across four seats, bellowing vulgarities at the entire car, selecting individuals for specific insults: “Hey fat girl, you think that you’re hot stuff in your Lululemon?”

These incidents and their seeming omni-presence these days do not leave New Yorkers feeling good about their city – or likely to ride the subway if they have other options. The Chief of NYPD Transit told the January MTA Transit & Bus Committee that prolific offenders who are repeatedly released back into the population right away are the major problem–and that “there need to be more serious consequences for crimes.”

We’ve Been Through This Before
As Joseph Raskin showed in his book, The Routes Not Taken, the details of constructing and maintaining New York’s subways were contentious and even contrarian from the very first days. But in addition to chronic crises there were several periods of profound crises – the 1980s being one of the worst and most recent. In 1983 “New York City's subway system was in chaos, rife with crime, derailments, delays, broken doors, track fires, and graffiti,” wrote William Finnegan in the New Yorker. Ridership had declined to under a billion in 1982, the lowest number since 1917.

Now it’s happening again but more dramatically — the system had far under a billion riders at 640 million in 2020 (official data for 2021 has not yet been released). Such a catastrophic plunge, largely due to the pandemic, has never occurred before.

Governor Mario Cuomo’s solution was to bring in Boston’s Robert Kiley as chairman of the MTA. Kiley understood his job as getting control of the system, which meant changing the culture from top to bottom, reorganizing managerial ranks, securing the yards where trains were kept overnight, and pushing zero tolerance for fare-beating and graffiti. While many of his reforms were fundamental and remain with the system today, he had one serious failure: by 1989 he still faced some quarter of a million passengers a day going over, under, and around turnstiles, said political scientist George Kelling.

Cuomo recruited William Bratton, another Bostonian, as head of the transit police, and he quickly ordered the arrest of fare-beaters. Bratton’s analysis showed that one in seven arrested fare beaters had an outstanding warrant for a previous crime — and one in twenty was carrying an illegal firearm. The Transit Police slogan became, “Disorder, fare-beating, and robbery are one problem. Deal with one and you deal with all.”

Many of Bratton’s ideas are now out of favor, but there’s no denying that after the Kiley-Gunn-Bratton years the subways functioned far better than they had in years. By the mid-1990s they were graffiti-free, safe, and packed with passengers. And they pretty much stayed that way until covid wreaked its destruction. Today’s path back is the path taken decades ago: restore order, and assure New Yorkers they’ll be safe. The problem of homeless people living in MTA facilities is far more severe now than then, spiking nearly 45% in eight important stations just over the summer, according to MTA chief safety officer Patrick Warren. And the challenges of so many New Yorkers working from home will continue.

What Can Be Done
A serious underlying problem is not the MTA’s to solve, and that’s the scandalously substandard quality of many New York City shelters. Mascali says that the number of single adults sleeping nightly in DHS shelters increased by a staggering 154%, from 7,700 in December 2009 to 19,596 in June 2021. Releases from state prisons directly to the shelters are largely to blame for the overcrowding and increase in danger.

Homeless people have repeatedly told outreach workers and journalists that they live in the subways because most shelters are unacceptably dirty and dangerous. But not all are, as the Upper West Side learned in the summer of 2020 when DHS overnight moved some 750 homeless men into previously private hotels. Two of the hotels became targets of neighborhood complaints about men loitering, drinking, fighting, shooting up, and having public sex – but the third, run by the Center for Urban Community Services (CUCS), went uncriticized.

Then-Manhattan Borough President Gale Brewer had called CUCS one of the best service providers in the city, and so they were. The manager took community calls and quickly handled complaints, which, by the end of the mens’ stay in July 2021, were almost zero. The men have returned to CUCS’ Delta Manor in the Bronx, a beautiful, new transitional facility with excellent programs, including athletics. If more Department of Homeless Services providers ran their facilities as well as CUCS, the MTA would be facing far less of a crisis – perhaps none at all.

And even though Mayor Adams can and should reorganize and restructure DHS and provide more drop-in centers, his reforms won’t happen in time to help the MTA. Instead, Governor Hochul and Mayor Adams are basically proposing two ideas: more cops and more outreach teams. On WNYC’s Brian Lehrer Show, Lieber said that the first step Mayor Adams has taken was to move police officers onto the platforms and onto the trains. Lieber said there would shortly be far more mental health professionals to provide services to those now using the subway as a dwelling.

The NYPD has increased police presence, ordering cops to make at least two subway station checks during their shifts, a law enforcement source told The Post. Gov. Hochul has pledged up to 20 teams of eight to 10 workers this year, including four teams by early spring.

What isn’t clear, however, is whether cops or mental health professionals will have enforcement authority to deter objectionable behavior or move dangerous people out of the subways. What if, as is likely, homeless people want to stay where they are, living in the subway rather than a shelter? Brian Stettin, policy director at the Treatment Advocacy Center, argues that “any strategy to tackle untreated severe mental illness must unapologetically recognize the need to provide involuntary treatment to individuals in crisis.” But this isn’t going to happen so long as what he calls “a phalanx of New York interest groups” oppose involuntary treatment. The major hope is that Governor Hochul’s additional outreach workers will persuade hundreds of homeless people to come in from the cold, temporarily in drop-in centers or longer term in shelters.

As a former NYPD captain and long-time student of crime, Mayor Adams has emphasized that public safety is “the prerequisite to prosperity.” He’s trying to strike a balance between “intervention and prevention,” which won’t be easy. But his mayoralty will only prosper if the subways prosper — once again safe, vandalism-free, and overflowing with New Yorkers.