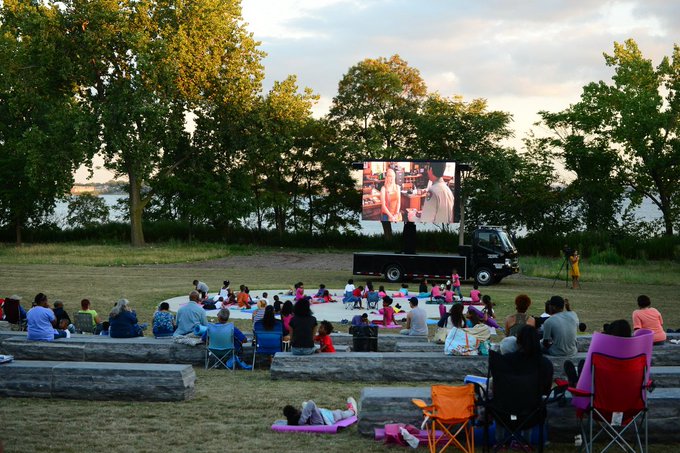 Movie in the park (photo: @NYCParks)

First of all, full disclosure. My wife and I have owned a home near Woodstock, NY for years. My wife was brought up surrounded by nature in Pennsylvania and thrives on feeding birds and chipmunks, and I was born on 50th Street and 8th Avenue and am energized by street life, asphalt, and the A train. We live in the West Village, and have for many years, including through the pandemic.

As has been well-publicized, a slew of New Yorkers, no longer bound by having to go into the office full-time or at all, have been gravitating to living in the Hudson Valley, the Hamptons, the Berkshires, and elsewhere. While many are moving back, many others are surely still considering a move out of the five boroughs for greener pastures. But if you move from the city, here’s what you’re going to be missing. You’ve been warned.

1) You’ll Be Walking A Lot Less
Living in the city is to love to walk and wander through its streets, its neighborhoods, its history and character. On a walk in Chinatown, one sees plaques of where writers were born and where historical documents were signed, and ends up on Doyers or Pell Street for delicious dim sum. In the suburbs, you won’t be walking anymore -- and if you do, it has to be planned, a drive to a hike. The main reason you won’t is in most of these locales, there are no sidewalks or shoulders on the road. If you walk, you could die. And because you’ll be driving everywhere, you’re going to be gaining weight and feeling lifeless. New Yorkers (of the five boroughs) weigh eight pounds less than the average American because they often walk miles daily, without even thinking about it.

2) Say Goodbye to Bodegas
In virtually every neighborhood in the city, whether Windsor Park or the East Village, there’s a bodega or small deli, oftentimes several, that has all of the basics you need, from ice cream to toilet paper. There’ll be no more bodegas in the suburbs or country-side. Now you’ll be driving to a supermarket and wandering the giant aisles where bagels and lox are considered foreign foods.

3) Every Street in the City Carries Memories
The East Village is where you used to drink egg creams at Gem Spa, the Upper West Side is where you made stops at Zabar’s, and DUMBO is where you went for pizza at Grimaldi’s. Or whatever your versions of this as a city traveler. Each neighborhood has its own aura, feeling, and joie de vivre. But upstate, it doesn’t work that way. Kingston is a small city, with a street called Broadway, filled with gas stations and Chinese take-out joints. A nice place for a weekend getaway.

4) The Suburbs Sleep
New York City’s subway runs 24/7, many pharmacies are open all night, and you can get a sit-down dinner at midnight with ease. That won’t be happening in the Hamptons or Berkshires. Some Berkshire restaurants have their final call at 8 p.m., and some stay open later, until 9 p.m. At 10 p.m., most everything is closed.

5) Whom You’ll Be Meeting
In New York City, I have friends who were originally from Davenport, Iowa, Allentown, PA, Nigeria, Kenya, and Australia. Upstate and in the Hamptons, you’ll be meeting, almost exclusively, ex-New Yorkers. And most of them will simply tell you over and over again how overjoyed they are to have left a crowded, dirty city.

6) Nature Can Be Tough
While nature is not the prevailing value that New York City offers, there is plenty of it in the five boroughs and worth exploring if you haven’t. The coyotes who have roamed the West Side Highway, the owls in Central Park, and the falcon who nests off of Washington Square are all New Yorkers. But in the Hudson Valley, the 600-pound bears will eat your birdseed, turn over your garbage cans, and hide in the woods when you’re barbecuing then try to steal your steak and burgers. And did I mention the ticks that cause Lyme disease? They’re everywhere. You’ve been warned.

7) Watch Out for the Drivers
On local roads upstate, in the Hamptons and Berkshires, drivers speed. They know every twist and turn, and tend to drive 50+ on a 30-miles-per-hour road. Moreover, they often don’t make full stops at stop signs because they’re in a rush, likely for ice cream at Stewart’s because there are no bodegas in walking distance.

8) Hamlets are Hamlets
In the town of Woodstock, which has about 7,000 or so residents, many people know one another and travel in similar circles and track each other’s movements. They know the people who own the local health food store, where they spend their winter, and what their children are up to. Everyone knows each other’s business. In the city of New York, with 8.8 million people, only your close friends know about you, and the remainder of the city’s denizens pays no attention to you and let you live your life gossip-free.

9) Adjust Your Sensibility
In the city, if you’re looking for a cup of coffee and there are five or six people on line, you’re not going to wait. You’re going to walk 65 steps and find the next coffee spot. In the Hamptons, Berkshires, and Upstate, you’ll wait. If you walk 65 steps, you won’t find another cup, you’ll find a parking lot.

10) You’re Giving Up Proximity
Most things in New York revolve around proximity. You get to know your neighbors in your building, the bodega owner and workers, and others in your community. You can walk to do many things and you can get public transit to do everything else. Anything you could want to do, from a museum to a show to a baseball game to a hike to a continuing education class to shopping to you name it, is not far off. If you live in a house upstate as most people do, often in the woods, with no neighbors around, proximity won’t operate. You’re on your own but for a lengthy drive.