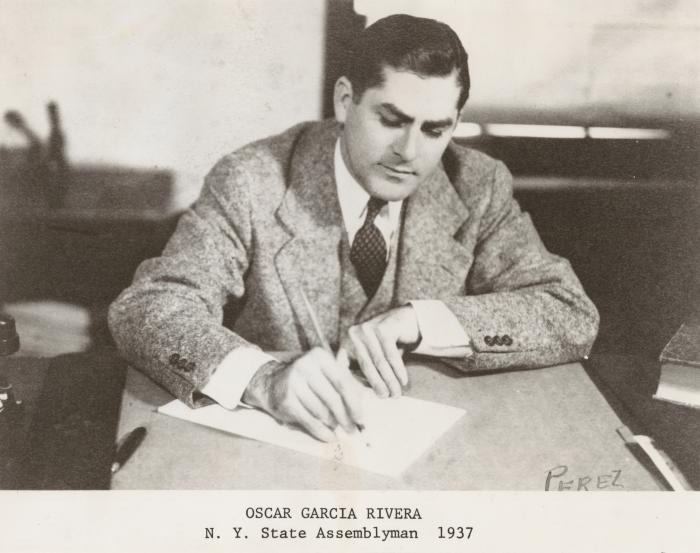 Oscar Garcia Rivera in 1937, the year he took office (photo: The Center for Puerto Rican Studies at Hunter College)

Tuesday, June 28, 2022, marked an important shift in Latino politics in New York, represented in part by Assemblymember Jose Rivera’s Democratic primary loss to George Alvarez. The significance of Rivera’s defeat goes beyond an election loss by someone who has been in office for four decades. Rivera represents the last of what can be deemed a third generation of Puerto Rican Latino elected officials, someone who was part of a generation that paved the way for the younger generation of current Latino political leaders.

Many of these younger leaders and members of the city’s broader Latino communities may have little understanding of the significance of Rivera’s life and career. This lack of historical perspective, important for understanding the trajectory of Latino politics in New York, one filled with long and difficult struggle, was made evident to me in a conversation I had with one leader who expressed bewilderment when I mentioned that Fernando Ferrer was the first Latino to win the Democratic nomination for the mayoralty in New York. The young leader had no idea who Ferrer was.

Rivera’s loss represents yet another confirmation of a gargantuan historical and demographic shift taking place in Latino politics in New York. To understand how we, as Latinos, have arrived at this point, we must have perspective on, and appreciation of, the events and people that led us here.

The need to tell our political story as Latinos has been burning inside me for years and has only intensified since that conversation with the young leader last year, in light of Dianne Morales’ run for the mayoralty, debate over representation at the statewide level amid two lieutenant governor vacancies, and other recent developments.

The following presents an outline of what has become a book I am writing on the history of Latino politics in New York. Rivera’s defeat, like his victory over an Irish incumbent 40 years ago, has a history. And it must be told. Here’s a snapshot of it.

The long and difficult struggle for Latino political representation begins 100 years ago with an unlikely cast of characters: cigar makers and numbers runners. By the mid-1920s, a large number of Puerto Ricans began to arrive on the shores of Gotham City. This first spurt of Puerto Rican migration was a direct result of the passage of the Jones Act in 1917, which forced on the island of Puerto Rico economic consequences that are still being felt today. Eight years after the Jones Act, an additional 40,000 Puerto Ricans arrived in New York, drastically increasing the community’s overall population from a mere 2,000 just a little over a decade before.

Most workers in the early Puerto Rican labor force were cigar-makers populating factories all over the city, including those like El Morito on 86th Street and 3rd Avenue in Manhattan, a location now surrounded by luxury high-rises and about a half-mile from East Harlem, which would become one of the early hubs of the Puerto Rican community.

The cigar-makers (tabaqueros) were a learned bunch. Bernardo Vega, one of the first to chronicle his life as a Puerto Rican migrant in New York post-1917, describes the type of colleagues he encountered at El Morito. There was Juan Hernandez, director of the workers’ paper, and Enrique Rosario Ortiz, Tomas Perez, and Matias Nieves, whom he describes as people active in the worker cause and in the wider Latino community. With such outstanding workers, it is no surprise to read from Vega that they hired lectors to read to all the workers for an hour in the morning and an hour in the afternoon. Morning reading sessions were devoted to the latest news of the day. Afternoon readings were headier and included political and literary tomes.

The tabaqueros were not only learned, they were also extremely organized. These organizational abilities and structures are what eventually led to political recognition. The tabaqueros were instrumental in fighting for workers’ rights, fair wages, and fair labor practices. They organized a number of small strikes, which culminated in a bigger strike in 1919.

While the 1919 strike did not necessarily lead to improved conditions, employers and others could not ignore the tabaqueros—these Latino men (overwhelmingly Puerto Rican) were brilliant, conscious of their own value (as Puerto Ricans and as a labor force) and highly organized. Many took notice, including an Italian-American politician who would eventually become mayor of New York City, Fiorello LaGuardia.

Interestingly, many of these tabaqueros were socialists, including Bernardo Vega and Jesus Colon, another key figure in early Latino politics in New York. The workers’ cause became an impetus for embracing socialist principles, which Puerto Ricans in New York had brought with them from the island.

All this led Bernardo Vega to initiate the first Puerto Rican chapter of the Socialist Party in New York. Other prominent early groups, like the Alianza Obrera Puertorriqueña, became hubs for the gathering of Puerto Rican socialists. One fascinating fact about the early Puerto Rican socialists is that they believed in the necessity of coalition-building for the cause of economic justice. Thus these same groups invited over 200 Jewish socialists to partake in conversations around workers’ struggles both in Puerto Rico and New York.

Puerto Ricans arriving in New York began to realize that in New York they would also face poor economic conditions, though perhaps not as severe as the conditions they had left behind. The economic struggles made early efforts to organize politically a daunting task. Effective organizing meant proper funding. Where would an economically struggling community turn?

Besides the tabaqueros, numbers runners (boliteros) were pivotal in what would become the early efforts in Latino politics in New York. The boliteros were among the early financial backers of the first Puerto Rican political clubs and organizations. One of these boliteros was Carlos Tapia, whom Nestor David Pastor would describe as the Puerto Rican Luke Cage. Tapia, with his linebacker size, was instrumental in the struggle for political empowerment and in defending Puerto Ricans against racism and police brutality. He would go on to co-found one of the very early Puerto Rican Democratic clubs in New York, the Betances Democratic Club in Brooklyn.

Tapia owned his own bodegas and restaurants and would go on to push these same clubs and organizations to cease receiving funding from the boliteros. By that point, in the late 1920s and early 1930s, Puerto Rican political organizations had garnered enough experience and channeled enough energy to gain the attention and support of some of the Democratic County organizations in the city.

Right alongside, and often in front of, these men were pioneering Puerto Rican women who also dedicated their lives to the social and political empowerment of Puerto Ricans. Noteworthy among these women is Antonia Denis. Unfortunately, not much information remains about Denis’ life and work.

All of the early pioneers are gone and very little documentation remains of the efforts of Denis and others. What we do know is that Denis was instrumental in the start of the Betances club as well as other political and cultural organizations and that she was known to be a one-woman voter registration and voter turnout champion.

Denis also was a pivotal figure in the early efforts to commemorate Puerto Rican culture and contributions through cultural festivities like the Puerto Rican Day parade. Fortunately, some audio recordings of interviews exist at the Center for Brooklyn History; they document Denis’ work, and she can be deemed the first instrumental Puerto Rican woman in Latino politics in New York.

Garcia Rivera, a St. John’s Law School graduate, would go on to serve in the State Assembly, representing the 17th Assembly District in East Harlem, now the 68th District.