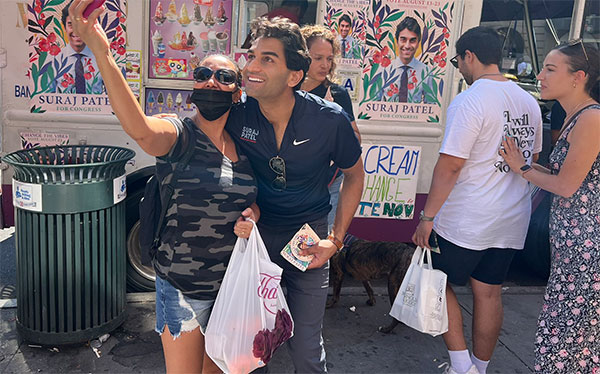 This month, Suraj Patel is poised to lose his third consecutive New York congressional primary. Though I won’t be voting for him, as an Indian-American politico Patel’s candidacy this time around has meant more to me than I anticipated.

I first encountered Patel as part of a freelance project for The Juggernaut about “The South Asian Americans Claiming Political Capital.” For the assignment I cataloged and interviewed a new wave of South Asian Americans running for office across the country in the wake of Trumpism. Patel was running for a second time against New York political icon Rep. Carolyn Maloney.

At the time, Patel was one of the more polished candidates I spoke with. Still, his campaign reeked of a millennial emptiness. It was as though in a post-Obama, post-AOC, progressive landscape with an openly xenophobic president at the helm, Patel had decided the timing was right to run — ready or not.

For example, in one article I came across from his first race, in 2018, Patel appeared determined to paint Maloney as a white nationalist when she pointed out that his donors included “a huge amount of the name Patel” and people from Suraj’s home state of Indiana (where Patel’s family operates a successful hotel development business). Patel claimed the comment was a racist dog-whistle, while Maloney’s camp insisted it was merely a comment to point out Patel’s out-of-state family support. As no stranger to othering microaggressions, to me the episode appeared contrived to fit the zeitgeist.

Worse, looking further into Patel, most of the coverage of his campaigns seemed to paint him as somewhat off. With so few Indian Americans represented in mainstream politics, I’ll admit some borderline communal embarrassment. Patel was called out for a campaign tactic that used fake online dating profiles on platforms like Grindr and Tinder to recruit supporters. Maloney then ran an ad painting him as “creepy.” His critics seized on an inappropriate Facebook exchange from several years prior that he had with a friend about a young female athlete.

After an incredibly close race in 2020, Patel filed a lawsuit to challenge the vote count naming the Board of Elections and Maloney as defendants. It was an arguably noble effort, but appeared tone-deaf as the coronavirus pandemic raged on and national democracy hung in the balance. Perhaps an unfair perception, but Trump even weaponized the controversy to support his false claims about voter fraud.

When Patel unveiled failed New York City mayoral candidate Andrew Yang as an early high profile endorsement for this year’s bid, I was ready to expect more of the same. Yet, over the past few weeks, to my surprise, I’ve felt pride watching Patel make his case to voters.

Through my window I see his campaign poster on a vacant storefront across the street. “Change the vibes,” it reads with a floral pattern that mirrors the campaign’s new energy. It is clear Patel has found his own voice in this campaign. Instead of being called creepy, this go-around Patel has developed something of a fan-base. “Not that it matters but MY GOD is Suraj Patel hot,” tweeted one admirer. His voluminous hair became the subject of positive internet attention after the first primary debate. Media celebrated his recent Hallmark-esque engagement, bridge photoshoot and all.

Form aside, Patel’s substance has also shifted for the better.

He comes off less entitled to a congressional seat simply because he is young, brown, and worked for Obama and more genuine in his connection with the community. His Instagram story is an example. It constantly features Patel engaging local business owners with a vibrancy that is missing from the Maloney and Nadler campaigns. In one example, Patel hops into the ice cream truck of a struggling local vendor to make his campaign pitch.

He also interviewed with and earned the endorsement of popular Indian-American social media influencer Zarna Garg. Aligning with Garg, a New York City-based comedian billed by CNBC as “the zany, outspoken voice of the Indian-American woman,” reflects the agility of Patel’s latest campaign. No longer over-reliant on progressive buzzwords, Patel has also found a way to show why his representation would matter — instead of just telling.

“I grew up folding The New York Times at my family’s bodega, it was the honor of a lifetime to sit for this interview for the first time ever,” he tweeted, sharing the transcript of his meeting with the Times editorial board (which endorsed Nadler). Growing up on stories of how my grandparents, small business owners themselves, came here from India with just $25 in their pockets the sentiment struck a chord.

The Times editorial board interview came not long after a reported piece in the same paper that showcased Patel’s energy, enthusiasm, and work ethic.

Patel acknowledges that one benefit of his perennial candidacy is that he has been able to learn from experience. In a recent interview on Gotham Gazette’s Max Politics podcast he reflected, saying of past campaigns, “we took on all these issues that were in vogue at the time that perhaps weren’t actually my core issues…trying to run as this institutional sort-of progressive thing you’re not.” This time, he said, he’s running on his lived experience and his many substantive ideas for tackling problems faced by New Yorkers and Americans.

Patel also notes he has gained perspective from his past failures. “Losing is a remarkable teacher,” he told podcast host Ben Max, editor of Gotham Gazette, “...as a person who hasn’t really lost much in life up until that point, the humility-gain from that was instrumental.”

To those who might criticize Patel's live-and-learn approach to running for office, it's worth considering that candidates from underrepresented backgrounds like Patel's often lack the mentorship or institutional supports that white and well-connected candidates benefit from.

I’m not voting for Patel in this primary because I don’t agree with his ideas, nor do I think he has made the case for replacing both Nadler and Maloney, two members of Congress with seniority. Yet, it means a lot to me — and others who look like me — that this third time around he has run a campaign he can be proud of and charmed New York City.

***
Kaivan Shroff serves as senior advisor to the Institute for Education, a D.C. non-profit. He is a political commentator and alumnus of the Hillary for America Digital Team with degrees from Harvard Law School, Harvard Kennedy School, Yale School of Management, and Brown University.