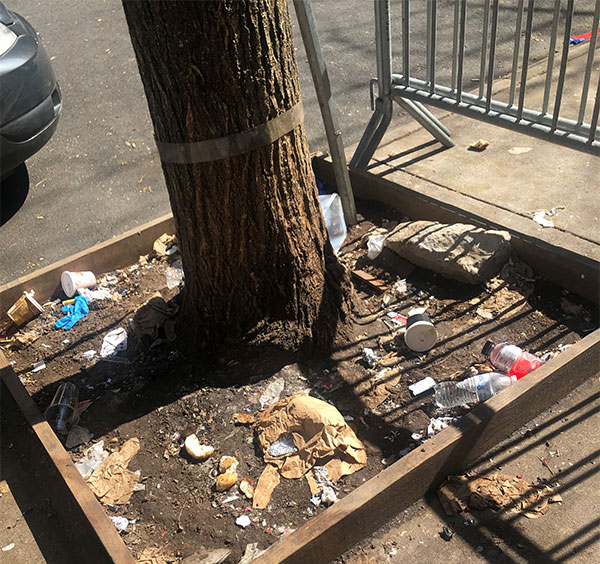 Rat vigilantes on the Upper West Side are placing exposed rat poison in the tree beds, endangering children and pets.

Two Upper West Side dogs, Waffles, a one-year-old rescue coon hound mix, and Beti, a six-year-old terrier mix, are the latest victims; upon ingestion, they were rushed to the vet for treatment and have both since made full recoveries.

While Upper West Siders have called on local government for a more aggressive response to rat sightings on streets, under restaurant sheds, and in street tree beds, those that take matters into their own hands and leave exposed poison in tree beds are putting their two- and four-footed neighbors at risk.

Rat poison poses an incredible danger to pets and children and should be containerized to avoid harm. Common rodenticides include warfarin, chlorophacinone, and Pival, which act as anticoagulants, intended to cause death by internal bleeding, according to the New York State Center for Environmental Health. If ingested by a pet, the animal should be taken to a veterinarian immediately to induce vomiting and apply other interventions to restore the animals’ homeostatic balance. (Vitamin K acts as an antidote; it can take up to 30 days for pets to completely rid themselves of the blood thinning toxin.)

There are about 693,000 trees lining the streets of New York City, which provide various environmental, economic, and health benefits. Currently, 22% of the city is covered by the urban canopy, which totals about 7 million trees, and advocates like Forest for All NYC are calling for 30% coverage by 2035, which I support. According to American Forests, New York City needs to add 1.5 million trees to the existing canopy to achieve equity in tree cover across the city.

According to a volunteer survey of every street tree bed in City Council District 6 conducted by my office in the second quarter of 2022, about 255 street tree beds showed signs of rat burrows, 4.9% of the 5,248 tree beds surveyed.

As New York City works to expand and protect the urban canopy, city leadership must establish clear guidelines for who is responsible for managing the tree beds, a critical piece of climate infrastructure.

Property owners are responsible for keeping the sidewalk adjacent to their property free of trash and debris; the city’s Department of Transportation (DOT) is charged with keeping sidewalks safe and accessible for all and ticketing offenders. The Department of Parks and Recreation (DPR) maintains tree beds it plants with trees for two years after planting, after which property owners become responsible for maintaining the bed. The Department of Health and Mental Hygiene (DOHMH) has a small budget for rat mitigation in tree beds, but mitigation in all tree beds is not in their purview.

So when there is a hazard or pest in a tree bed, who is responsible for addressing it?

The street tree bed ownership challenge is a bureaucratic quagmire. There’s no clear administrative body that handles the rat burrows in tree beds. That’s why I’ve written to the commissioners of DOHMH (responsible for rat mitigation overall), DOT, and DPR asking for clarity. It’s the first step toward attacking the rat problem holistically. In the meantime the vigilantes going after rats on the Upper West Side should stop taking matters into their own hands.

When rat bait is placed out illegally by individuals who are not licensed to apply pesticides, it should be reported to the New York State Department of Environmental Conservation Police at 718-482-4885.