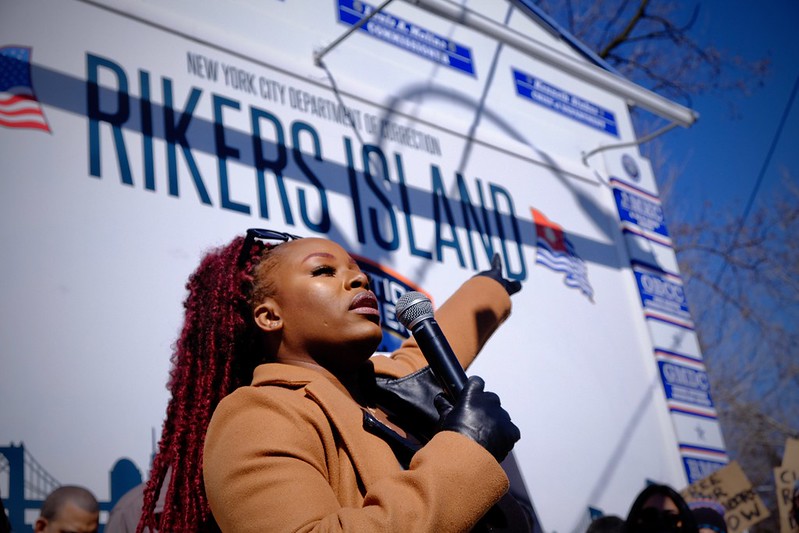 Stephanie grew up without a stable family and ended up in an abusive relationship with a boyfriend. A cycle of physical and emotional violence continued for years, leading to Stephanie giving him drugs while he was in prison, which resulted in her incarceration.

When she was released and returned to the city, Stephanie’s boyfriend raped her, and she became pregnant. Afraid for her life, she went to a domestic violence shelter. Stephanie’s parole officer claimed that she didn’t provide her change of address and that she tested positive for drugs, which she denies.

In 2018, she ended up at the Rose M. Singer Center (Rosie’s) on Rikers Island. Pregnant, and suffering from sleep apnea, Stephanie was in a life-threatening medical situation. After three months the court agreed that Stephanie could leave Rosie’s and instead be placed with SHERO, which provides transitional housing and services to women, gender-expansive people, and their families.

Like Stephanie, 93% of women diverted from Rikers Island have experienced domestic violence: physical, sexual, or emotional abuse, according to a recent report by the Women’s Community Justice Association and the Rikers Commission. Nationally, an estimated 77% of women in jail have experienced intimate partner abuse

With 16 deaths on Rikers already this year, there is an urgent need to decarcerate. As we honor Domestic Violence Awareness month, one way that New York City can address the Rikers crisis is to ensure that domestic violence survivors are diverted from jail and instead given the community-based resources they need to heal.

It should start with strong preventative services that help those suffering from domestic violence avoid criminal legal system involvement in the first place. That includes access to physical and mental health care, legal services, and affordable places to live. Economic independence is also crucial, but those with criminal records face barriers to hiring, professional licensing, and housing. Passing city and state laws that remove these unfair restrictions would help more families who have endured abuse to thrive financially and avoid the devastating cycle of incarceration.

The next step is to get domestic violence survivors off Rikers and into community-based alternatives. There should be holistic screening for physical, sexual, and emotional abuse, and other factors, such as mental illness, by peer specialists who have lived experience with the criminal legal system. These considerations should be used by judges, prosecutors, defense attorneys, and others involved at every stage of a case.

In 2019, New York passed the Domestic Violence Survivors Justice Act, which has judges take into account a history of abuse when determining sentencing. Having domestic violence considered earlier in the case, including for bail and charging decisions, would help to get more survivors off of Rikers more quickly.

Finally, there should be better access to programs like SHERO, which has diverted Stephanie and over 300 women and gender-expansive people from Rikers since it launched in 2017. It costs $60,000 to $70,000 annually for a program slot at SHERO, compared with $550,000 to incarcerate someone at Rikers.

While at SHERO, Stephanie gave birth to a healthy baby. “I had my own apartment and case managers that listen and care about me,” she said. “This is a community of women who support each other. I’m in culinary school and working towards my dream of becoming a chef.”

New York City must do more to protect and support domestic violence survivors whose trauma and experiences leads them to Rikers Island. Strong community-based resources that prevent incarceration and a focused effort to more quickly divert those at Rikers into alternatives would improve safety and justice.

***
Michelle Feldman is the Policy and Campaigns Director for Women’s Community Justice Association, which advocates to end mass incarceration for women and families in New York. On Twitter @WomensCJA.