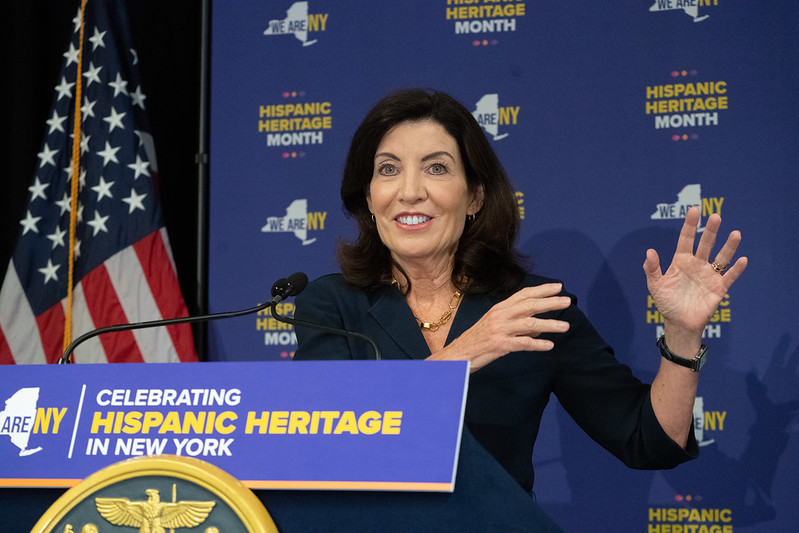 She once adamantly opposed the idea of giving drivers’ licenses to undocumented immigrants; she even went so far as to threaten their arrests and deportations. No Latinos were on the original list of speakers for the convention of the State Democratic Party, of which she is the de facto leader. The Nueva York Initiative the party established as an effort to woo Latinos would, they said, only generate a “multi-year, six-figure investment.” A paltry six-figure amount is not nearly enough to make a dent among Latino voters. Though a lieutenant governor with a Latino-sounding name was appointed, Antonio Delgado is not actually a Latino. And when new party executive leadership was selected not too long ago, no Latinos were on the list.

With an abysmal record on Latino matters, can Governor Kathy Hochul win the Latino vote in this year’s election? The short answer is “yes—but.” She may win their vote, but it’ll likely be with a smaller margin than that of any of her Democratic predecessors.

Much has been said about the non-homogeneity of Latinos, and that is certainly true. Latinos come from a variety of Latin American countries, with differences in culture, language accents, and the like. Yet despite this wide-ranging diversity, Latinos in New York tend to vote Democratic and for the most part align on issues of importance. For example, a UCLA study showed that 78% of Latinos in high Latino-density election districts in New York voted for Joe Biden in the 2020 presidential election.

At the statewide level, Latino voting preferences tend to follow the same Democratic line. By my own estimations, Andrew Cuomo’s support among Latinos in his elections hovered between 62% and 65%. Most public polling data tended to show slightly lower levels of Latino support, as this Siena College poll taken close to the 2018 election demonstrates.

Among the public polls that included Latinos in their crosstabs, Cuomo would tend to poll in the high 50s to low 60s. We must bear in mind that most public polls have a tendency of missing the mark on Latino support since they fail to correctly sample Latinos within their surveys. For instance, polls that undersample Latinos increase the margin of error in the Latino demographic and create particularly imprecise data.

These inaccuracies notwithstanding, Hochul has been polling at lower levels than Cuomo among Latinos. This October Siena poll had Hochul at 56% among Latinos.

An October Marist poll had Hochul at 55% with Latinos, where an October SurveyUSA poll had Latino voter support for Hochul at 45% with an additional 19% of Latinos polling undecided. Again, despite the undersampling of Latinos, these Hochul numbers suggest that her level of support among Latinos is still lower than Cuomo’s.

Yet I suggest that these Hochul numbers do not necessarily represent Latino defection from the Democratic Party or from Democratic candidates and thus a pull to embracing conservative candidates and ideologies. Current voter registration data does not suggest significant Latino defections from Democrats to Republicans. Furthermore, recent election results, like Eric Adams’ victory last November, also do not show any evidence that Latino voters in New York City (75% of Latino voters statewide reside in the City of New York) are leaving the Democratic Party or its candidates in droves. Latino support for the Democrat Adams resembled support for previous Democratic mayoral candidates.

Furthermore, the recent polling on the 2022 general election may also bear this out. Latino support for Senator Chuck Schumer’s reelection is at 57% (versus 45% for Hochul) in the SurveyUSA poll, 63% in the Siena poll (to 56% for Hochul). The Marist poll is the only public poll that has Hochul receiving a higher percentage of the Latino vote than Schumer (55–53%). When it comes to support for President Biden and Democratic congressional candidates, Latino support is consistently in the 60% range, also higher than Latino support for Hochul.

So, what gives with Hochul?

Several factors may account for Hochul’s lower numbers among Latinos than her predecessor. On one hand, most public polls indicate that crime remains the key issue for Latino voters, more so than economic concerns. It may be the case that Latinos are not happy with Hochul’s handling of crime, which typically hits communities of color harder than other demographic groups. Lee Zeldin, Hochul’s Republican challenger, is running the typical GOP election playbook and hammering Hochul on the significant crime problem in New York.

Second, the lower level of Latino support may be a consequence of Hochul’s election strategy, one which many have deemed an equivalent to the Rose Garden strategy made popular by William McKinley in the late 19th century and Jimmy Carter in the 20th. Hochul has refrained from the type of sustained retail politics that Latinos appreciate and by which they are motivated.

Lastly, Latinos may be getting tired of a political party that seemingly has only paid lip service to the needs and demands of its communities, from public safety and small businesses to education and housing. And even when the party and its leaders make attempts to reach into Latino neighborhoods, they respond with paltry attempts like that of the Nueva York Initiative and its minor “investment.”

Yet, Latinos across the nation and in New York have consistently and faithfully pulled the levers for Democratic candidates, including Governor Hochul in June’s Democratic primary. Many Latinos would say that they have not left the Democratic Party or its leaders; the party and its leaders have left the Latino constituency

Hochul has her work cut out for her in Latino neighborhoods across the state. The last two weeks of the race will be critical for her election efforts, particularly as campaigns shift into get-out-the-vote. Will Latinos see their governor?