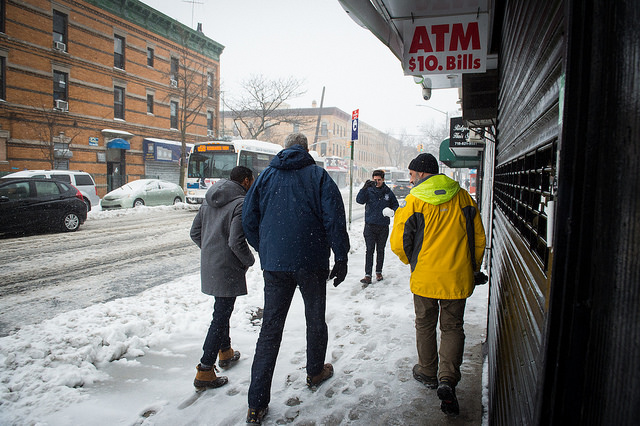 Is the number of people homeless on New York City streets skyrocketing?

There were 3,892 unsheltered homeless people on the streets or outside in public places on the cold night this past February when New York City conducted its annual street homelessness count, according to the City’s own statistics released this month. That’s a jolting 39-plus percent increase in one year over the 2016 street homelessness count of 2,794.

New York City’s HOPE Count (Homeless Outreach Population Estimate) is an annual one-night count of unsheltered people experiencing homelessness on New York City streets, or in public places. The City readily notes it’s really an estimate. It is the point-in-time (PIT) census type count required by the federal Department of Housing and Urban Development from all communities in order to qualify for certain federal funding for homelessness service programs.

These PIT canvasses count both people who are sheltered and unsheltered. In most communities the great majority of people experiencing homelessness are unsheltered. In New York City, though not in any other major city, there is a an enforceable legal “right to shelter” for most people in need, so that the great majority of homeless people in New York City -- more than in any other U.S. community -- are sheltered. The city can provide a completely accurate “daily census” of people in the Department of Homeless Services shelters each and every day. Counting people who are living rough on the streets or in other public places is a very difficult proposition.

Any large scale “count” in a city like New York is a massive undertaking. New York City annually mobilizes between 3,000 and 3,500 volunteers to work with city staff in counting in over 1,500 defined areas, all over one night. They even have a “decoy” program, employing people to be on the streets in the role of unsheltered homeless people over the time of the HOPE count to see how many of the decoys (call them a sort of control group) do or don’t get counted, and use the ratio of counted to uncounted decoys to assist in making the estimate.

These kinds of counts were invented in New York City. Experts have called the New York City effort “the gold standard” of the point-in-time count. This, of course, is not to say the HOPE Count is actually accurate.

One of several major problems in the way the count is conducted is that it intentionally limits itself only to counting those on the streets or in public places. But every New Yorker knows many unstably housed people often spend very cold nights in what might be called semi-public enclosed spaces. Think people who hang out overnight in a 24-hour McDonald’s or Dunkin Donuts. And remember, the point in time count is typically scheduled on a January night which tends to be extremely cold. In fact, at least twice in recent years the point in time count was pushed back to the first week in February due to snow storm predictions, but still was held on bitterly cold nights.

For the last several years the Bronx Health and Housing Consortium has conducted their own fascinating count on the very same night as the city’s HOPE Count -- but counted inside in some of the emergency rooms in the Bronx. Consortium President Henie Lustgarten, an organizer of the project that began in 2014, spoke about how the project works.

This volunteer project operating just in a few emergency rooms of hospitals that agreed to participate has developed an ingenuous methodology. In each emergency room they survey they count two groups of people as “homeless.”

First, anyone who registers for emergency treatment indicating they have no address or that they live in a shelter (but wouldn’t be in the DHS census for that night because they aren’t in shelter that night) is counted as homeless.

In 2015, for example, surveying just five Bronx emergency rooms, the Bronx Health and Housing Consortium count was 120. The complete HOPE count for the Bronx that year was 69. The numbers and percentages vary, but consistently the Consortium emergency room count has been greater than the HOPE Count of street homeless people in the Bronx.

So the population of unsheltered people experiencing homelessness in New York City probably didn’t increase by 39-plus percent this year. Unfortunately, the real number is almost certainly more than the 3,892 people estimated in the 2017 HOPE Count.

***
Jeff Foreman, who resides in Queens, is Policy and Advocacy Director for nonprofit Care for the Homeless. On Twitter @JeffForeman2 and @CFHNYC.