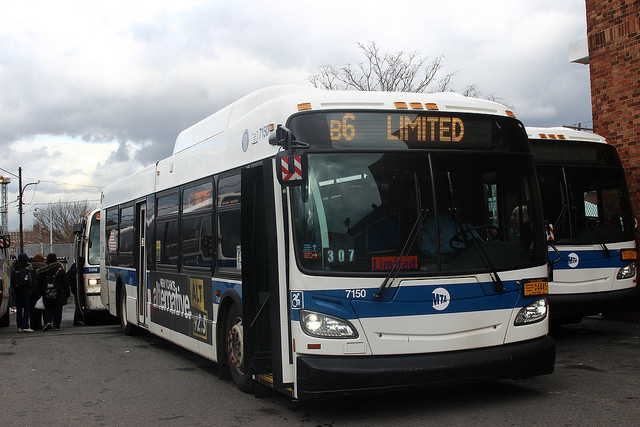 The new congestion pricing surcharges on taxis and on-demand ride services below 96 Street in Manhattan are designed to address congestion in midtown, but they generate more controversy than impact. They might raise a few hundred million dollars a year for the MTA to fix the subway. But they won’t do anything to reduce congestion or air pollution. Meanwhile another big ticket MTA budget item has gotten little attention but will have a huge impact on New York City's emissions, air quality, and public health: bus procurement.

The MTA plans to spend over $300 million this year and $1.38 billion over the next four years to buy about 1,700 new buses. Some 1,300 of them – roughly a billion dollars’ worth – are slated to be diesel-fueled, and therein lies the rub. Diesel vehicles were powerful and efficient for the 20th century, but they are big polluters. Much better 21st century alternatives exist.

Analysis by Energy Vision recently submitted in testimony to the City Council shows that diesel buses and trucks on our streets generate a disproportionate share of adverse impacts on New York City’s climate, air quality, and health. Across the City’s municipal fleets, its 10,000 medium- and heavy-duty trucks consume 60% of the fuel, emit 63% of GHGs, and are a major emitter of health-damaging nitrogen oxide (NOx) and particulates (PM). Thousands of MTA diesel buses compound the problem. According to Dr. Philip J. Landrigan, head of Global Health at Mt. Sinai, eliminating diesel buses and trucks from our fleets would reduce New Yorkers' childhood asthma, heart disease, lung cancer, strokes, and health care costs.

New York City has ambitious goals for achieving the best air quality of any major U.S. city by 2030 and for cutting GHGs 80% from its municipal fleet vehicles by 2035. This year Mayor de Blasio announced the City would go “fossil free” by divesting its pension funds from fossil fuel stocks. Realizing these ambitions is vital for the climate, our health, and our kids' futures. But there is little chance of that if the City and the MTA continue to purchase more heavy-duty diesel trucks and buses.

The MTA will buy 110 new natural gas buses this year, which is significant. But its fleet of 5,700 buses already includes over 4,500 diesel buses, plus the 1,300 new diesels it plans to buy over the next four years.

The City Department of Sanitation (DSNY), which operates the largest refuse fleet in the country -- more than 2,200 collection trucks -- runs virtually all of it on biodiesel, which is 80% ordinary diesel fuel. It has just 42 natural gas trucks, and it buys hundreds more diesel refuse trucks every year.

We can do better. New York is now far behind other world-class cities in weaning itself off diesel.  London has already stopped procuring diesel vehicles for its fleets as of this year because of their health and climate impacts. Eleven other major cities are pledging to follow its lead, including Oslo, Rome, Beijing, and Shanghai.

In fact, New York City is one of those 11. The MTA and the City can and should start phasing out diesel vehicles now.

The questions are, what alternatives should replace them and how fast could they ramp up? The MTA is piloting electric buses, which are quiet and have zero tailpipe emissions. But they cost a whopping $300,000-$400,000 more than diesel per vehicle. The City is aggressively deploying light-duty electric vehicles and charging infrastructure, but electrification of its heavy-duty trucks is not yet a commercial option, especially for refuse trucks, since they don’t have enough power to both collect garbage and plow snow.

There’s a better way to decarbonize New York’s heavy vehicles. The MTA and the City could do what other cities are doing: buy more natural gas (CNG) buses and trucks equipped with efficient engines that cut emissions and can run on renewable fuel.

The new “Near Zero” natural gas engine, certified by the U.S. EPA, has taken clean burning to a new level. It cuts health-damaging nitrogen oxide and particulate emissions 90% below the EPA’s most stringent standard. Near Zero buses and trucks are only about $50,000 more than their diesel counterparts. They are just as powerful and serviceable and are 50-80% quieter than diesel engines.

They can run on conventional CNG, but even better, they also run on biomethane or Renewable Natural Gas (RNG). RNG is chemically similar to conventional natural gas, but it is not a fossil fuel. It’s made from a renewable resource: organic waste, such as food waste from homes and businesses, the sewage that goes to wastewater plants, agricultural manures, and more. Instead of drilling, RNG is produced by collecting and refining the methane biogases emitted by those organic wastes as they decompose, in special tanks called “anaerobic digesters.”

The resulting fuel isn’t just clean-burning; it is the lowest-carbon fuel available. When made from food waste or animal manure, it is actually net carbon-negative over its lifecycle. In other words, making it captures more greenhouse gases (which would otherwise escape into the air as the waste breaks down) than are emitted by the vehicles burning it for fuel. There’s no faster, more cost-effective, or climate-friendlier way to cut fleet emissions.

The MTA already has 800 buses and DSNY already has 42 refuse trucks that use conventional CNG. With a simple change in fuel contracts they could run on RNG overnight. The RNG could be delivered through the same natural gas refueling stations that now supply conventional natural gas, and at the same price.

There is plenty of RNG available in the U.S. Over 40 projects are processing decomposing organic wastes into vehicle fuel across the country. More are under development in the New York region that could make fuel for our municipal fleets from our own waste streams. The roughly 1.2 million tons of food waste generated in New York City each year could make enough RNG to power all the trucks in the City’s fleets, turning a costly waste burden into a valuable energy resource.

Nationwide, there is enough RNG production potential to power the refuse, bus, and airport fleets of every major U.S. city. Some 20,000 buses and trucks across the country now run on RNG. Los Angeles Metro has purchased 295 RNG-fueled “Near Zero” buses, with an option to convert its entire 2,200 transit bus fleet. Santa Monica’s “Big Blue Bus” fleet converted to RNG completely, and more municipalities are following suit.

So what is New York City and the MTA waiting for? Getting our heavy vehicles off diesel is the single biggest step we can take toward a sustainable transportation sector, and would propel us toward meeting the City’s clean air, climate, fossil fuel elimination and waste prevention goals. It’s high time we got started.

***
Joanna D. Underwood is founder and board member of the national environmental organization Energy Vision, which researches, analyzes and promotes viable technologies and strategies to transition to a sustainable, low-carbon energy and transportation future. On Twitter @Energy_Vision.