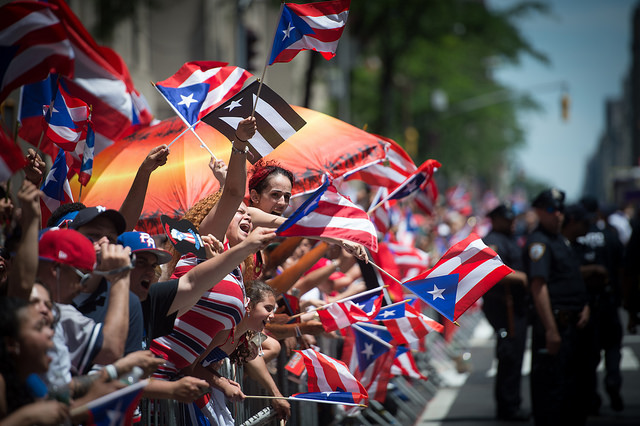 About 2.5 million New York City residents are Latino, making the community the second largest ethnic group in the city only after non-Latino whites. The majority of the city’s Latino population is U.S. born and nearly 80% say they speak Spanish at home.

But despite strong population growth, Latino New Yorkers face a number of adverse conditions that continue to put constraints on their economic progress. About 26.4% of all Latino families live in poverty. That number jumps to 49.9% among households led by women with children. Immigration status, high unemployment, and displacement are just a few of the pressing contributing factors leaving Latinos behind.

The Latino community must work together to shape its future.

With that in mind, last year three Latino research institutes at CUNY—the CUNY Dominican Studies Institute, Center for Puerto Rican Studies (Hunter College-CUNY) and the Mexican Studies Institute —along with other partners, held the first ever New York City Summit on Latinos (SoL-NYC), to forge advocacy coalitions to develop an action-based agenda of policy priorities that can move the Latino community forward.

As we prepare to hold the second SoL-NYC Summit on Friday, June 1, we released a set of recommendations produced at last year’s conference through the participation of over 40 representatives of Latino or Latino-serving organizations. While it identifies some of the constraints on Latinos in New York City, it also calls for immediate action.

The recommendations include education reforms responsive to the linguistic and cultural needs of our children; increasing civic and political participation of the community; better access to jobs and economic opportunities, as well as strengthening the city’s “sanctuary” status to better protect law-abiding immigrants at risk of deportation.

This year is particularly important given the federal government’s one-sided focus on immigration, the upcoming gubernatorial election, where Latinos could play a crucial role, and the still-painful devastation left in Puerto Rico by Hurricane Maria. The aftermath of Maria in particular is driving a new exodus to the New York area of Puerto Rican families, which could once again bring demographic change.

As academic institutions, we do not engage in direct action or endorse political candidates. However, we recognize the importance such strategies bring to other stakeholders as they see fit.

Latinos are not a homogeneous group. In New York City, Hispanics represent over 20 different countries of origin and national ethnicities, which can pose a challenge to finding a common agenda.

As conveners, our role is to produce data and non-partisan policy analysis as well as an important space for key stakeholders to find common ground, build alliances, and strengthen their organizing power.

Latinos are strong in numbers; we are the youngest New Yorkers, with a median age of 31 and 36% under the age of 18. We now need to come together to wake up our own sleeping giant and create change.

It is encouraging to see Latinas obtaining college degrees at a faster pace now and also represented among new candidates for office and those recently elected.

However, there are deep, ongoing challenges -- the unemployment rate is still very high, for example, at 11%, compared to the overall unemployment rate of 3.9% in New York City (as of December 2017). Who is making sure that every job creation effort at the city and state levels includes Latinos? Without good-paying jobs there is no upward mobility for a group that’s the poorest and whose diversity brings language barriers as well as different educational levels and immigration statuses. Those are the kinds of discussion our annual conference wants to foster.

While the Puerto Rican and Dominican populations have been growing and spreading around the country, New York City remains the place with the most Puerto Ricans and Dominicans anywhere in the United States. New York City is also the seat of Puerto Rican and Dominican political power at the local, state, and federal levels, given both representation and influence. The Mexican population in the city continues to grow as well, leading also to political empowerment at the city level. Overall, Latinos have become nearly one-quarter of the New York City electorate, mirroring the importance of the Latino vote on the national level.

We are calling on neighborhood leaders, organizations, and other stakeholders in the Latino community to use the conference as a powerful tool to help bring the much-needed resources Latinos need.

Latinos are in good position to drive legislative change. Let’s take advantage of that power to make New York City a more livable home for Latinos and everybody else!