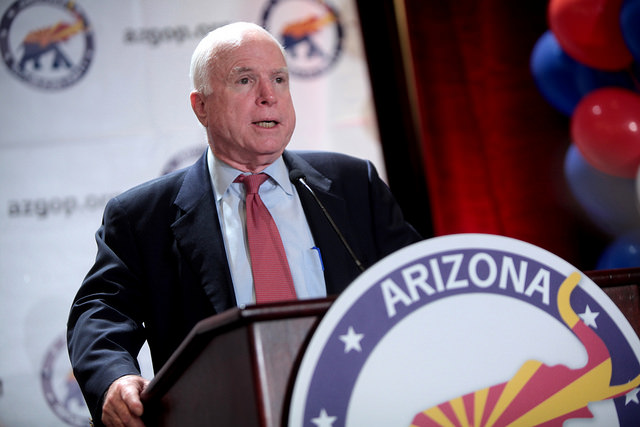 There are precious few genuine heroes left in public life in America. That’s why the passing of John McCain last weekend felt like such a huge loss for many of us whose lives are devoted to the practice of politics and government.

Despite his flaws, Senator McCain leaves behind a deep and unique imprint on American history. Among his most important legislative achievements was the enactment of the most significant national campaign finance reform measure since the post-Watergate years.

As a young press secretary to Congressional Rep. Christopher Shays (R-CT) in the late 1990s, I had the opportunity and privilege to work with Senator McCain and his staff as part of the legislative coalition fighting for reform on Capitol Hill. Though there were many good men and women whose efforts were necessary for success, there was no question who was leading the charge.

The issue of reform was a personal one for McCain. As one of the “Keating Five,” he was rebuked by the Senate for exercising poor judgment in meeting with bank regulators on behalf of Charles Keating, a long-time campaign donor and chair of a failed savings and loan institution. McCain described the incident as a low point in his career. He openly admitted his mistakes, apologized to his constituents, and began a relentless push to transform the campaign finance system.

The proposition that McCain and his colleagues advanced was a simple one: the same laws that applied to the way that candidates raise funds should apply to political parties and other campaign groups. No more corporate shakedowns for the party leaders—they would need to follow the same “hard money” restrictions as candidates. Interest groups trying to swing elections with campaign commercials disguised as “sham” issue ads (i.e. “Call Senator Smith and tell him to keep his hands off our guns”) would have to play by the same rules.

This was a stance that put him in direct conflict with the leaders of his party—Trent Lott and Mitch McConnell in the Senate, and Tom DeLay in the House—who collected the dough and held the purse strings. The McCain-Feingold legislation was a direct threat to their way of doing business.

Party leaders on both sides routinely approached corporate leaders for six-figure donations, often as they were considering Congressional action on their priorities. They distributed the proceeds to help their colleagues in close races. By withholding campaign funds, they could—and often did—exact retribution on those who stepped out of line.

The forces arrayed against the reform effort were powerful. Unlike today, there was no urgency from the grassroots in either party to address the corrosive power of money in politics.

Yet through the sheer force of personality and will, McCain pushed reform onto the national agenda. I recall long-serving members of Congress, as cynical as they come, whose faces would light up like school-kids in the presence of the senator from Arizona. Invariably, they would leave our coalition meetings giddy to follow him into battle.

The Bipartisan Campaign Reform Act (BCRA)--known as McCain-Feingold after the bill’s sponsors--took an extraordinary route to passage, one that seems no longer possible in today’s hyper-partisan environment. In the House, dozens of Republicans joined their Democratic colleagues to sign their names to a discharge petition that forced the bill onto the floor against the wishes of Speaker Dennis Hastert. In the Senate, 11 Republicans joined with the Democratic caucus to give the bill a filibuster-proof majority.

In taking on their party leadership, many of the moderate Republicans at the time were embarking on what could have been a political suicide mission. But McCain believed his party should succeed through the power of its ideas, not through the force of its fundraising efforts. By word and deed, he inspired his colleagues to follow his lead.

As we embark on a new conversation about campaign finance reform here in New York City, there are a few lessons to be drawn from the experience.

Achieving reform is about the art of the possible. It requires compromise and coalition-building. For all his legendary stubbornness and temper, McCain was an extraordinarily practical legislator. He was no purist—while protecting the soft-money ban at the core of his signature bill, he built his winning coalition by negotiating and embracing amendments offered by his colleagues. Some stand today as essential elements of every national campaign—if you are familiar with the phrase “I’m John Smith, and I approve this message,” you’ve felt the impact of McCain-Feingold.

The passage of McCain-Feingold stands as the high-water mark for reform in the post-Watergate era. While McCain himself moved on to other issues of great import and a second run for President, the federal campaign finance system rather quickly reverted to the norm. Under Chief Justice John Roberts, the Supreme Court has rolled back many the gains made by Congress under McCain’s leadership.

While the parties are still prohibited from cashing big corporate checks, McCutcheon expanded the parties’ ability to raise big money from wealthy individuals. And Citizens United eviscerated BCRA’s common-sense limits on fundraising for campaign advertising by independent groups. Unlimited funds from corporations, unions, and wealthy individuals are freely available to SuperPACs and political non-profits, many of which can evade even disclosure of their funding sources. With long-time reform opponent Mitch McConnell as majority leader of the Senate, efforts to reclaim that progress seem unlikely.

The rollback of McCain’s victories at the federal level makes it plain that reform is hard work. No lasting reform is a one-and-done effort. Successful reform takes patience, persistence, and constant vigilance. In New York City we have a campaign finance program that is the envy of reformers across the nation because we persist in the work of keeping the program strong.  While the matching funds program has long helped candidates from diverse backgrounds run for office without relying on support from big business, unions, or wealthy individuals, questions about the role and impact of bundlers and large contributors in New York City’s system are proof that the work of perfecting reform is never done.

Indeed, the Campaign Finance Board is required to report after each election on the program’s impact on city elections, and issue recommendations to strengthen it. The Board’s report on the 2017 elections is out this week, and I urge you to take a look. The City Council has taken up many of these proposed reforms over the years, and this year’s Charter Revision Commission has advanced proposals that align with some of the Board’s recommendations. It takes many hands, working together, to transcend political divisions and to achieve lasting success.

Perhaps, in his passing and through our remembrances, John McCain can remind all Americans what is possible when our leaders are willing to put their allegiance to city, state, and country before their partisan or personal interest. Achieving reform doesn’t require heroism, but it does require sustained, selfless, and practical leadership.