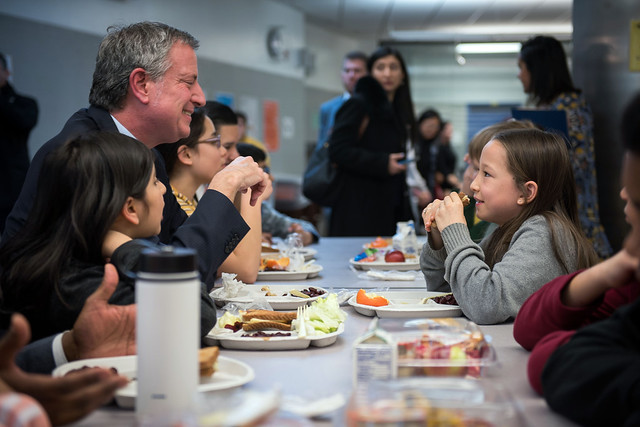 My nephew is 10-years-old, is obese, and has type-2 diabetes. He wasn't raised to eat healthy, and my sister and brother-in-law don't always do the best to encourage good eating habits. One place they have no control over my nephew's diet is at school.

He's in 5th grade in a public school in northern Manhattan. He often tells me what he has for breakfast and lunch at his school, and laughs when he sees my reactions to what he describes. Bagel sticks with cream cheese and jelly, cinnamon twists, juice, and chocolate milk are just a few of the items he brags about that taste good.

New York City's public schools have come a long way in improving the quality of school food over the years. The city has worked hard to make school meals healthier than other cities across the country, and the Obama Administration was on the same page when it passed the Healthy, Hunger-Free Kids Act in 2010, which aimed to serve more nutritious and fiber-dense whole grains and less flavored milks, which contain harmful added sugars.

But then came President Trump, and in December 2018 his administration weakened the law by reversing limits on sodium, allowing flavored milks and reducing whole grain foods in school food. Earlier this month a coalition of state attorneys general and two food policy advocacy groups sued the Trump Administration for violating the Administrative Procedure Act and the Healthy, Hunger-Free Kids Act by authorizing the reversal last December and bypassing legal requirements.

As a graduate student at NYU’s Robert F. Wagner Graduate School of Public Service, I’m passionate about improving public health (like my 10-year-old nephew's) through improved food and public health policies. I wrote a food policy brief last fall for one of my classes, arguing that New York City public schools should eliminate flavored milk during breakfast and lunch and instead offer plain milk as the default. It also proposed making 100% fruit juice available during breakfast and only upon request by the student.

Using evidence-based research, I explained that both flavored milk and 100% fruit juice are large contributors to diet-related chronic diseases like obesity and type-2 diabetes, which affect not only many adult New Yorkers, but children as well.

According to the New York City Department of Health and Mental Hygiene, one in five city kindergarten students is obese. Studies show that obese children are at increased risk of becoming obese adults, and statistics show that obesity is more prevalent among black and Hispanic people compared to those of other races.

There is already strong scientific evidence linking poor quality school food, like flavored milks, to diet-related chronic diseases. However, many people (even doctors and nutritionists) are misled that 100% fruit juice is healthy. The sugars in these juices, even though all natural, are just as bad as added sugars in soda. Sugars in whole fruit are filled with fiber, so it's filling and hard to eat a lot of. Sugar in whole fruit is delivered slowly to the liver, which more easily metabolizes the sugar without being overloaded.

Fruit juice, without the fiber, sends a large amount of sugar quickly to the liver, just like when you consume a soda. Most of the sugar in fruit juice is fructose, and the liver can only metabolize it in small amounts. When the liver is overloaded with fructose, some if it turns into fat, and some of it stays in the liver, causing non-alcoholic fatty liver disease, insulin resistance, and eventually type-2 diabetes. Advocates like Dr. Robert Lustig, Professor emeritus of Pediatrics, Division of Endocrinology at the University of California, San Francisco (UCSF), have been warning America about this metabolic epidemic for years.

School districts across the country have been trying for years to improve the quality of school food to make it healthier for children. The trend started in 2006 in Berkeley, California. There, under the direction of Chef Ann Cooper, then Director of Nutrition Services, the city banned chocolate milk from their school district. Chef Cooper moved to Boulder, Colorado, in 2009, and did the same for that school district. In 2010 Washington, D.C. and Fairfax County, VA both eliminated chocolate milk from their public schools. In 2011 Los Angeles removed all flavored milks, becoming the largest school district in the country to do so (even though in 2016 they reversed the policy as a result of pressure from the dairy industry). In 2013 Montgomery County, Maryland banned strawberry milk from its schools. In 2014 Connecticut considered removing chocolate milk from all schools in the entire state, but ultimately the governor didn’t sign the bill. Finally, in 2017, San Francisco removed chocolate milk from all of its schools.

At the time I was writing my food policy brief for my NYU graduate class, the Trump Administration announced that it was rolling back school nutrition standards, and I mentioned it in the brief. The Trump Administration thinks it can reverse policies that have taken years to fight for and implement without following legally required procedures. I applaud New York Attorney General Letitia James for leading this coalition of attorneys general who brought on this lawsuit.

New York City has worked hard to improve the quality of its school food and usually is a trendsetter for the rest of the United States when it comes to public health (see: smoking ban, menu labeling). The city needs to continue striving for excellence in public health policy and to help make New York City children healthier. Stopping irrational policy reversal decisions with lawsuits may be the only way to fight the Trump Administration, which doesn’t seem to care about the childhood obesity and type-2 diabetes epidemics currently facing New York City and the rest of the United States.

I do care. I care about my nephew's health and future, and I intend to contribute to positive change in public health not only in New York but the rest of the country. Won’t you join me?