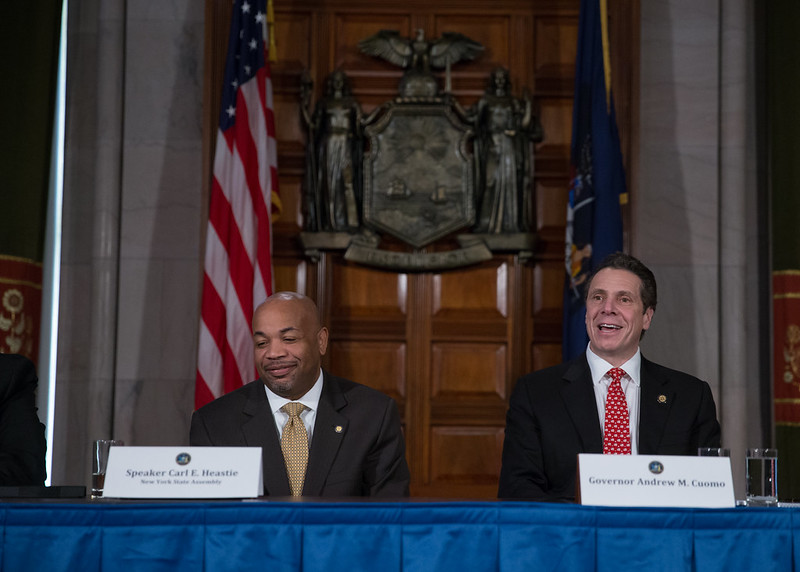 This week, the state campaign finance commission, created out of the backroom dealings of the 2019 budget process, released a set of flawed recommendations for a small-donor public matching campaign finance system despite workable alternative recommendations provided by experts and activists alike. In addition, by deviating from its primary mission by focusing on a petty attempt by Governor Andrew Cuomo and his allies to eliminate third parties like the Working Families Party, the commission made a mockery of the countless hours spent by New Yorkers who showed up at hearings across the state.

It should never have gotten to this point. For years, a majority of members in the Assembly said they supported public financing. The newly elected Senate Democratic majority campaigned on plans to uplift the voices of everyday New Yorkers. The governor has claimed support for public financing for years. And make no mistake, the pillars of a strong public financing bill exist.

The Legislature squandered the chance during the legislative session to introduce and pass a gold standard bill drafted by the Brennan Center, which unlike the commission’s recommendations, would have more thoroughly reduced the influence of big money donations in our politics and more effectively enabled new voices to run for office.

So how is it possible that the details of a widely supported democracy reform policy could be left in the hands of an unelected, undemocratic commission in the first place? I’d argue it was 15 years in the making.

The state budget is built on the power of appropriations, allocating specific funds to specific purposes. You might think that in a functional democracy, the elected officials that New Yorkers vote for and send to Albany would have a shared responsibility in that process. It seems only logical that the Legislature and the Governor would negotiate a budget that’s consistent with their constituencies’ desires. But in New York, this is simply not the case.

In 2004, the Court of Appeals issued a decision in Silver v Pataki that laid out a division of power between the executive and legislative branches that has enabled the Governor to wield tremendous control over the New York State budget and appropriations. The court’s interpretation of the separation of powers in the state constitution means that when it comes to appropriations bills, the Senate and Assembly can only reduce or fully eliminate the Governor’s proposed spending. And while the Legislature can add proposed spending, the Governor has the power to veto those additions.

Throughout his time in office, Governor Cuomo has tested the limits of this interpretation, introducing more and more policy and reform into appropriations bills, insisting on “on-time” budgets, playing legislators off each other, and creating an untenable position for legislators fighting for a more progressive budget. With very little leverage to negotiate modifications, legislators must choose between accepting the governor’s austerity driven budget packed with oft-watered-down policy, or shut down the government.

However, the Legislature, including the latest Democratic majorities, has also been complicit in the creation of our broken budget process. Complex policy decisions are jammed into the budget, even outside of appropriations bills, which enable legislators to avoid public scrutiny on the final make-up of the legislation being passed and to provide cover for controversial votes.

The Governor and Legislature are collectively responsible for punting campaign finance reform to this unelected commission. And it was amid the backroom compromise, enabled by Assembly Speaker Carl Heastie and Senate Majority Leader Andrea Stewart-Cousins, where the governor incorporated language that opened up the potential for the commission to weigh in on political party qualifications. The final recommendations from the campaign finance commision have now validated the fears of those who rightly saw the commission as a mistake and the party-related language as an unnecessary, dangerous sideshow.

So where do we go from here?

First, there are two paths forward in overcoming the Court of Appeals decision issues on Silver v Pataki. One path is a re-litigation strategy aimed at overturning the previous ruling. But the surest way to tackle this challenge is through a constitutional amendment, introduced and passed in two subsequent legislative sessions.

Some will tell you that challenging the Silver v Pataki decision is an uphill battle; that the likelihood of a constitutional amendment passing a Legislature fearful of the Governor’s blowback is low. But it wasn’t that long ago that another power dynamic, widely considered unbeatable, held our state back from delivering on a vision of a fairer, cleaner, and more equitable New York. Yet in 2018, New Yorkers worked together to shine a light on the Independent Democratic Conference (IDC) and organized to eliminate its stranglehold on the State Senate.

Second, it’s time for New Yorkers to turn their attention to the state’s budget process and demand a true commitment to transparency. Public policy should not be negotiated behind closed doors. The historical “three men in a room” budget negotiation was meant to be upended with the election of our first woman leader of the State Senate, but sadly much of the negotiations of this past year’s budget remained as opaque as recent years.

In 2020, legislators and insurgent candidates will have another chance to share their visions for our state. If they don’t acknowledge and rally against the Governor’s overreach in budgetary powers enabled by the Silver v Pataki decision and commit to removing policy negotiations from the budget, their broader campaign promises should be taken with a hefty dose of skepticism.

Years from now, I hope we will look at the failures of the 2019 state campaign finance commission as the breaking point that led to a re-alignment of power in Albany; the moment when New York’s undemocratic budget process hamstrung the state’s ability to lead the nation in expanding and strengthening our democracy.

***
Ricky Silver is the co-lead organizer of Empire State Indivisible. On Twitter @es_indivisible.