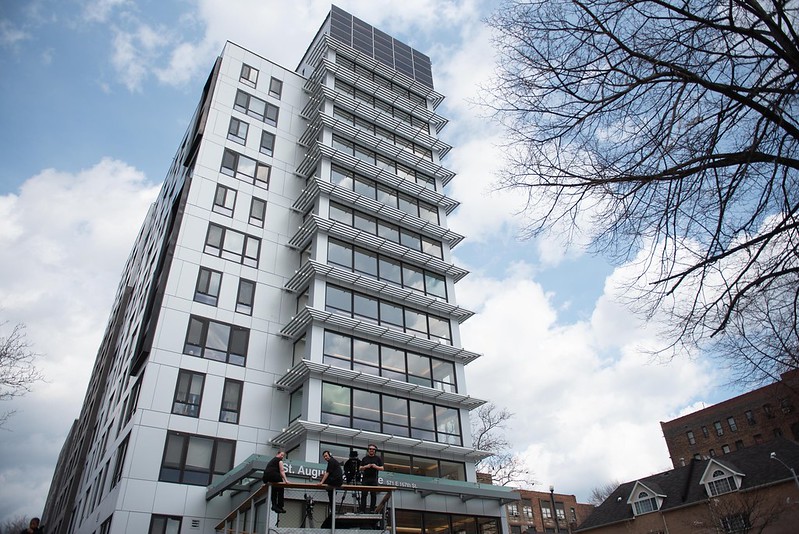 New York City’s housing crisis is getting worse. While a significant number of luxury units sit vacant, the population of homeless children is growing, we have only a 1% vacancy rate in public housing, and more than half of New Yorkers spend over a third of their income on housing. We have a serious problem on our hands.

According to basic economics, the solution to demand exceeding supply is an increase in supply. A scarcity of units causes prices to rise; the most effective way to ease this upward pressure on rents is to build more, and to do so quickly. New residential units start a “migration chain” that filters down to lower income brackets, as well; the benefits of new construction filter down the property ladder even if the new construction is a luxury high-rise. Development alone is not enough -- we need to incentivize the creation of affordable units and provide low-income families with additional assistance -- but unless we build more, we have no hope of making housing more affordable in New York City.

And yet, we are struggling to build. According to Mayor de Blasio’s “Where We Live Now” plan, there were 163,000 new housing units built in the 2010s, down from 198,000 the decade before. Even the 1930s saw greater production of new housing.

Though conceptually, most people would agree that to fix our shortage we need to build new units, in reality most people don’t want new construction on their streets. Resistance to new development comes from a variety of different fears. Though blocked views, loud construction, and overcrowded trains are easy to dismiss as NIMBYism, other concerns are more nuanced. New development can change neighborhood character, and many communities fear that it can accelerate gentrification and displacement (though research contradicts this claim).

Despite these objections, we need to build more housing. Currently, it seems like any proposal, no matter how small, encounters fierce opposition. We should be mindful of how development will impact our diverse neighborhoods, but protestors and anti-development activists should consider the counter-factual: What will happen to our city if there is no development at all?

The build-but-not-here phenomenon we are experiencing in New York City is a classic collective action problem. In many cases, it is rational for people to want to keep new construction out of their neighborhoods. But when we take an individual’s rational decision and expand it to an entire city, we run into trouble. When all of New York City says “no” to new development, where does that leave us?

Currently, development proposals feel haphazard and uncoordinated, but we can start to break the stalemate with a comprehensive city plan, which is in the City Council’s legislative pipeline. Led by Council Speaker Corey Johnson and Council Members Brad Lander and Antonio Reynoso, the comprehensive plan would sketch out a long-term plan for rezoning, development, and land use decisions within the five boroughs.

The New York City Council attempted to introduce a comprehensive city plan as part of the 2019 Charter Revision Commission. The 2019 proposal, which failed to be put to voters, observed that for other major cities across the globe, comprehensive plans serve “as the basis for land use, zoning, and capital planning decisions.” New York City struggles to reach consensus on any of these issues, leading to stalled projects and, ultimately, skyrocketing rents.

Critics of a comprehensive city plan decry it as a toothless document and futile effort. They compare it to existing “fair share criteria,” a set of guidelines to help New York City place public facilities in a thoughtful, equitable way. Though well-intentioned, the criteria have made little difference in how city government actually allocates facilities.

Whether or not a comprehensive city plan changes patterns of development in New York City, though, at the very least such a plan will make new development projects feel more coherent. Currently, New Yorkers struggle to see how the buildings proposed for their neighborhoods fit into a broader effort to make housing more affordable. When proposals feel like one-off projects, they are easy to dismiss. After all, it is true that one building will not make a meaningful difference to the number of units we have on the market.

If, however, each proposed building is part of a clear plan to make New York City more affordable for everyone, opposition to development may become less venomous. True, a comprehensive city plan will not solve our housing affordability issues or eliminate disagreement entirely. Tensions surrounding gentrification and displacement will remain, and NIMBYism will continue. But at the very least, New Yorkers will be able to see how each new development connects to a larger plan. A citywide planning framework will not fix everything, but it is a good place to start.