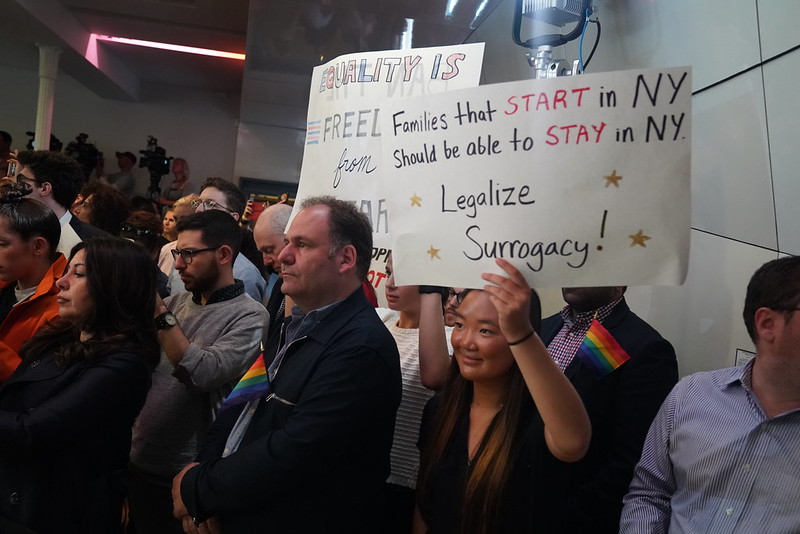 There are competing proposals to legalize surrogacy in NY (photo: Governor's Office)

Imagine having a baby but then being told you have to wait eight days before securing custody of your child. It’s bizarre and cruel, yet it’s an idea that’s actually being floated in Albany right now as a “compromise” to finally end New York State’s outdated ban on gestational surrogacy.

As a three-time cancer survivor in my thirties who went through three rounds of fertility preservation before treatment, this is heartbreaking. I choose to live in New York for many reasons, one of them is the progressiveness of our laws. We are leaders, but not on surrogacy. Now, it’s essential we catch up, and there’s nothing progressive about a bill separating newborn babies from their biological parents just days after birth.

During my cancer recovery, I was shocked to learn New York is one of only three states banning surrogacy. This is an issue that hits home for me and the women I work with who have also survived cancer. For many cancer patients, infertility is an enormously emotional and physical side effect of life saving treatment. This can mean a significant decrease in number and quality of eggs, as well as the inability to carry a child to term. In many cases, the only possibility for having a biological child is through a partnership with a woman acting as surrogate.

Last year, Governor Cuomo, signed FAFTA (the Fair Access to Fertility Treatment Act) into law.  Part of this mandate (that went into effect January 1, 2020) requires private insurance companies to provide fertility preservation medical treatments for people facing iatrogenic infertility, that is, infertility caused by a medical intervention, such as radiation, medication, or surgery. The next obvious step is to figure out a solution that helps these women become mothers after their cancer chapter has closed.

Currently, New Yorkers in this situation are forced to go out of state to find a surrogate. A bill that would end that ban, the Child-Parent Security Act, has the strong support of Governor Cuomo and passed the state Senate last year before dying in the Assembly. It is under serious consideration again this year, with the governor prioritizing it in his budget proposal.

Now a new bill is being sold as a “compromise” that while technically legalizing surrogacy would also effectively eliminate its practice in New York. This means an exacerbating ‘well we tried’ response from people who don’t take New Yorkers’ needs seriously.

The so-called compromise bill (S7717), sponsored by Senator Liz Krueger and by Assemblymembers Didi Barrett and Danny O’Donnell, would establish that after a child is born via surrogacy, the surrogate (who has no genetic relationship to the child) and the intended parents (who in most cases do have a genetic relationship to the child) would share parenting responsibilities for up to eight days. The surrogate could take the child home if she chose to. And if she petitioned the court within those eight days, she would automatically become the legal parent of the child with no recourse for the intended parents. In order for the intended parents to become legal parents, they would need to submit to medical evaluations, home studies, and background checks. Last I checked, these are not requirements for those with the ability to become mothers the traditional way.

Think about how cruel this proposal is for women struggling with infertility, including cancer patients. Imagine having to undergo treatment, doing everything possible to preserve fertility options, recovering from cancer, creating an embryo through IVF, and ultimately partnering with a woman who will carry your child to birth as a surrogate. And then still having to worry every day of the pregnancy that at the end of the process, the woman who is serving as a surrogate will change her mind and keep your child. It’s frightening, cruel, and just outright wrong.

It also reflects a lack of understanding about what surrogates want. Under professional practices in the United States, every surrogate already has their own biological children and have undergone careful medical and psychological screening. These women know exactly what they’re engaging in – they’re not pursuing surrogacy to have another child, but to help a family that cannot have children on their own.

Conversely, the Child-Parent Security Act would go far in helping those struggling with infertility in New York build a family. This is where New York can establish itself as a leader once again, now as it relates to surrogacy. In addition to legalizing compensated gestational surrogacy agreements, the legislation would create peace of mind for intended parents and establish the strongest protections in the nation for women serving as surrogates. Critically, the legislation would create a Surrogates’ Bill of Rights in New York, ensuring that women serving as surrogates have the right to make all medical decisions regarding their health and the pregnancy, the right to independent legal counsel, the right to comprehensive health insurance, and the right to access counseling.

Given the additional pain and trauma Senator Krueger’s proposal would put cancer patients seeking to become parents through surrogacy through, I hope she will consider withdrawing it and choosing instead to support the Child-Parent Security Act. New York must legalize surrogacy agreements and I applaud Senator Krueger for recognizing that need. But it is critical that we do so in a way that does not create additional trauma on intended parents – who have already gone through so much – and that protects women who serve as surrogates in New York.

***
Amanda Rice is the founder and CEO of the Chick Mission, a non-profit focused on critical issues unique to young, female cancer patients – including fertility challenges that may follow after surgery, chemotherapy, radiation, and drug treatment. On Twitter @thechickmission.