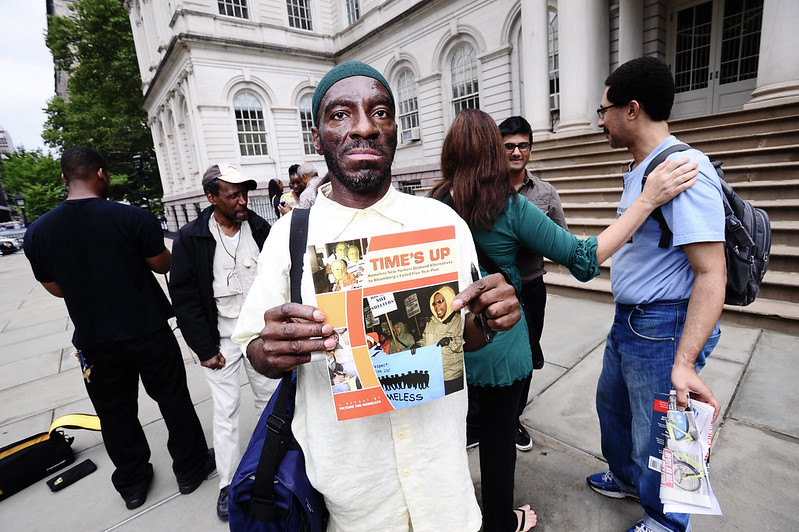 Imagine the reaction if the number of deaths within a particular neighborhood or among a certain ethnic, racial, or religious group had gone up by 40% in one year! There would be demonstrations on the steps of City Hall and the Mayor would be forced to respond.

Unfortunately, that is what has happened among the city's homeless population. Between July 2018 and June of 2019, 404 people considered homeless in New York City died, according to a recently-released city report. That is a 40% increase over the prior year and the largest year-over-year increase in a decade.

Many of these deaths did not occur within shelters. Homeless people died in hospitals, on subway cars, in abandoned buildings, and in vacant lots. The majority were middle-age men. Drug addiction, alcoholism, and heart disease were major contributors in many of the cases.

However, 15 homeless people died by suicide, which was more than double the amount in the previous year, and three of those individuals took their own lives inside a shelter. There were also 10 homicides, three more than the prior year (and although none took place in a shelter during the reporting period, at least two people were killed inside a shelter between July and December 2019).

In addition, 17 infants died in the system compared to 10 the prior year, a shocking number. Many of these cases are still under investigation. In addition, women also died more frequently than the prior year, to 91 deaths, up from 59, another incredible increase.

You would think such shocking statistics would sound an alarm at City Hall, but the administration‘s reaction to this has been underwhelming at best -- that basically it’s not their fault because these deaths and underlying conditions are results of “chronic health conditions due to decades of risk factors,” as city Social Services Commissioner Steve Banks told Gothamist.

Incredibly, administration officials seem to brag that when it comes to drug-overdose deaths, they have been able to keep the numbers steady, but at a high rate of 103 accidental drug overdose deaths.

Dr. Mitchell Katz, the CEO of the city’s public hospital system, told Gothamist that the overall increase in deaths among homeless people is driven by an aging homeless population and easy access to cheap drugs. In fact, the majority of those who died last fiscal year were middle-age men and there are 1,400 seniors in the shelter system.

Why is it then that seniors and middle-age men and women are not being prioritized into the supportive housing system? A middle-age man and woman in a homeless shelter system is equivalent to a much older person living a stably-housed life. The city must urgently move to get middle-age people and seniors who are living on the street and in the shelters into supportive housing as quickly as possible.

As someone who has run two supportive housing programs I know the advantages of these programs, which give a homeless person their own apartment and a social worker to speak with on a regular basis, among other services. Unfortunately, the placement rate into supportive housing is at a 14-year low, according to Coalition for the Homeless. Be aware that an increase in affordable housing coming online is not going to help this group. You need housing that is structured for supportive services and for a population that has no income.

We can no longer allow homeless people who are living on the streets and in the subway system to vegetate and sleep in filthy conditions, many of those who do clearly have serious mental and physical health issues. The current standard of when someone can be committed to a psychiatric hospital is that the person has to be a threat to themselves or others. However this has been interpreted too strictly.

A commonsense approach has been proposed by Loree Sutton, a former Army brigadier general and psychiatrist who was the city’s veterans services commissioner until resigning and announcing her candidacy for mayor in 2021. Doctor Sutton has suggested that the civil commitment law be amended so that seriously mentally ill people can access inpatient services before exhibiting an immediate danger to themselves or others. Of course we also must stop the elimination of psychiatric beds and reverse course to substantially increase the number of those beds available in the city and state.

Health services must be improved within the shelters and we need to quickly increase the number of drop-in centers that will allow people to get off the street quickly and receive food, clothing, showers, medical care, and access to a social worker. A nurse at a drop-in can quickly diagnose an urgent medical problem and call for an ambulance. We now have only two of these centers in Manhattan.

The very shocking statistics of fatalities among the city’s homeless population must be investigated and the subject of a City Council oversight hearing. The Council cannot allow the administration to sweep this under the rug and cast off blame. The large increase to an already unacceptable problem must be paid the attention it deserves.

***
Robert Mascali is a former Deputy Commissioner at the Department of Homeless Services and a former Vice President for Supportive Housing at Women in Need.