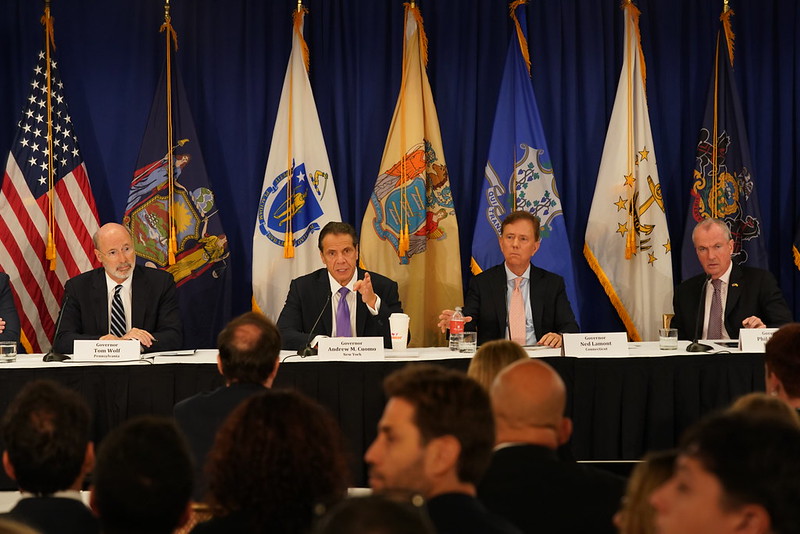 Tri-state governors have coordinated to close bars. Now they must coordinate to close tax loopholes.

Governor Cuomo has gotten a lot right in addressing the COVID-19 health crisis in the past few weeks. But at the state budget deadline, he has been far too willing to shred the social safety net that millions of New Yorkers rely on, and so many more will need as the economic crisis worsens.

One thing he got right could point the way to repair some of that damage.

Cuomo saw right away the need to get New York working closely with New Jersey and Connecticut. The governor quickly brought the tri-state region together to shut down bars and recreational businesses, and to collaborate on a regional approach to confront the coronavirus crisis.

That’s no small feat. Regional coordination has long been the elusive dream of good government gurus, seeking a saner approach to transportation and economic development. President Trump appears so threatened by this new tri-state alliance that he threatened to quarantine us off from the rest of the country.

Now that this tri-state partnership exists, we must use it for more. A regional approach can help us replace lost revenue and rise to the recovery challenges we face.

As New York State looked ahead to its new fiscal year, a $6 billion budget deficit was blown wide open by the pandemic, with tax revenue projected to drop by as much as $15 billion. Given the halt of so much economic activity and mass layoffs, Connecticut and New Jersey face similar problems. The federal relief package offers scant help. We must keep fighting for more, but it’s not likely to be anywhere near enough.

To address the budget gap, Governor Cuomo has pushed reductions to health care and public education funding (including steep cuts to already diminished CUNY and SUNY schools), and in aid to cities and counties. In the midst of the crisis, his Medicaid Redesign Team proposed a $2.5 billion cut to the projected state Medicaid budget, including $400 million that would have gone to hospitals just as they battle coronavirus.

Some cuts are necessary, but these cuts to our core safety net programs will be devastating to the very people hardest hit by the COVID-19 crisis. The coronavirus pandemic has turned pre-existing gaps into gulfs. Those who were already on the margins, served by underfunded hospitals, or living paycheck to paycheck, are hit hardest by the public health and economic catastrophe. Undercutting their health care and education is not the answer.

Revenues are going to take a big hit, though, as income and sales taxes plummet. So we need new ways to raise funds from those who have plenty, rather than cutting services for those who did not have enough even before this crisis.

As he has been in the past, Governor Cuomo has been reticent to increase taxes on the wealthiest New Yorkers, or even to close tax loopholes.

But his own regional response offers a new, smart way to do so. In the past, one concern he has voiced about such policies has been that businesses or wealthy individuals will flee New York State to avoid any new tax policy, thus depriving us of even more revenue. After all, it is not that hard to commute to work on Wall Street from Greenwich rather than from Scarsdale. Or to move your business address to Jersey City.

One change that advocates have long sought is to close the “carried interest” loophole. Because of this loophole, the income of private equity and hedge fund managers is taxed at half the rate of other taxpayers (their income is taxed at the “capital gains” rate, lower than the income tax rate, even though this is not investment money that the managers have put at any risk).

Two years ago, Cuomo proposed to close this loophole, calling it a “fairness fix” that could bring in over $1 billion to state coffers. But there was one hitch: it would only go into effect if neighboring states would adopt it as well. Sadly, they did not.

The regional compact that the governor has established to confront the COVID-19 crisis is a great opportunity to revive this effort. Just as our states have coordinated to close bars and restaurants, we can coordinate to close this loophole.

The governors should take a similar approach to coordinate on other proposals to tax the region’s very wealthiest, such as a tax on wealth over $1 billion, annual income over $5 million, or an increase in corporate tax rates. Yes, Wall Street has taken a hit. But the top 1% in our region are not facing food insecurity, eviction, and homelessness.

Given the likely need to reopen this budget as the contours of economic and fiscal challenges become clearer, and the pain of the cuts is felt, it is not too late to consider these tax policy changes. In fact, it is right on time.

Our region has flourished over the past decades as a result of the work and creativity of immigrants. But many of those very families (undocumented people, mixed-status families, and even many immigrants with legal status) will be denied federal relief. They will not be eligible for the $1,200 emergency checks heading out to the majority of Americans, or for the expanded disaster unemployment insurance. Without help, they will soon be facing very real crises, unable to pay for food or rent.

Our region’s economy is built on the labor and the spending of these workers and their families, who work in restaurants, clean buildings, deliver food, take care of the elderly and the young, and much much more. We cannot afford to leave them behind.

We need a regional approach both to make up the budget shortfall and to put money where it is urgently needed right now: in our hospitals, and in the pockets of the most vulnerable families.

We will all feel the squeeze of this crisis. But those who will suffer the most are those whose health insurance, education, and social services have been put on the chopping block. Using a regional approach to raise revenues from those who have more than enough is both the smart and compassionate path forward.

***
Brad Lander is a New York City Council Member from Brooklyn, and the Council’s Deputy Leader for Policy. He is a candidate for New York City Comptroller in 2021. On Twitter @bradlander.